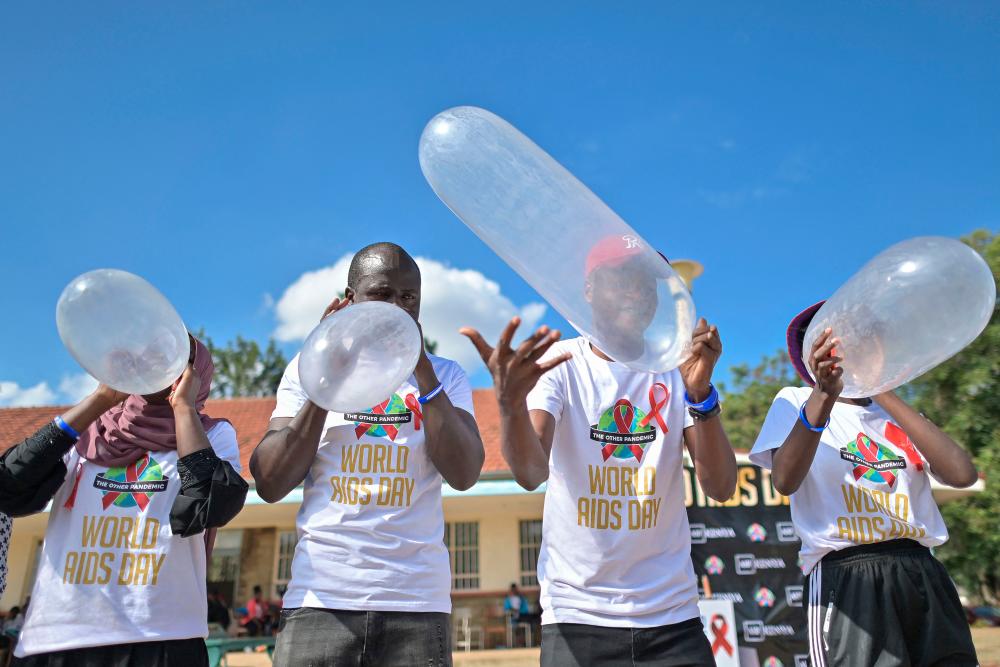 Peer educators compete to inflate condoms during a 'condom olympics' presided over by self declared 'Africa King of Condoms', Stanley Ngara, a kenya national, during a World AIDS Day commemoration at the Kenyatta University campus in Nairobi on December 01, 2021. When Stanley Ngara started teaching young Kenyans about safe sex he found many too embarrassed to listen noting that HIV&AIDS, sex and protection we're taboo subjects in most african homes leading to a surge of infections among the youth who are now the primary target of his outreach as he fights destigmatise safe sexual practice among young people. AFPpix

JOHANNESBURG: HIV infection rates in Africa have decreased markedly, but the continent is still behind set targets, with efforts slowed by the Covid-19 pandemic, the World Health Organization said Tuesday.

“Africa has made significant progress against HIV over the past decade, reducing new infections by 43 percent and nearly halving AIDS-related deaths,“ the WHO Africa office said in a statement.

But it warned that Africa was not likely to meet a target to end AIDS as a public health threat by the turn of the decade as Covid has undermined the fight in many countries.

“Covid-19 has made the fight against HIV all the more challenging, but one virus must not win out over another. We must tackle Covid-19 and HIV in parallel,“ WHO Africa chief Matshidiso Moeti said.

Covid has also slowed HIV screening rates because of restrictions of movements.

UNAIDS last week warned that HIV infection rates were not decreasing fast enough to reach the goal of eradicating AIDS by 2030.

According to data released at the annual International Conference on AIDS and Sexually Transmitted Infections (ICASA) currently being held in South Africa's port city of Durban, only nine African countries are on track to meet the target in the next four years.

“This scorecard is a wake-up call for African governments to stay focused on ending AIDS,“ Moeti said.

South Africa, the country with the world's highest HIV prevalence at 20.4 percent, is hosting the week-long annual meeting bringing together scientists, politicians and activists. - AFP