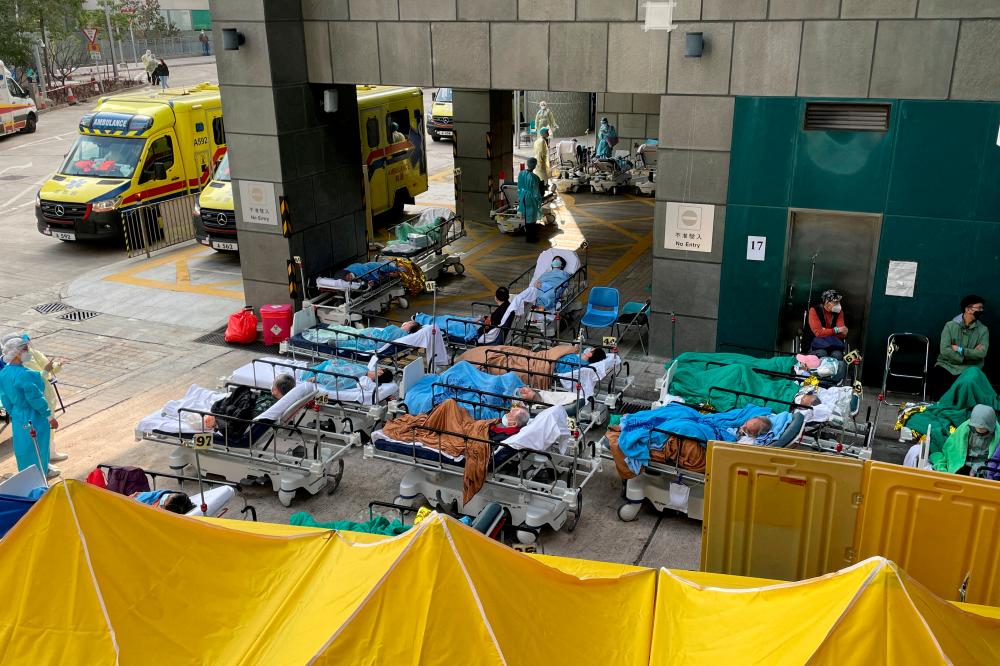 HONG KONG: Yee, a nurse on the frontline of Hong Kong’s fight against Covid-19, recently became one of the patients her hospital had to turn away, after isolation wards, and later corridors, became overpacked with people on gurneys.

At home, the 25-year-old spread the virus to her father, and fears her mother and brother might also get it. Rules say she should be sent to a quarantine facility, but nobody got in touch for the past seven days to make arrangements.

She was experiencing mild symptoms, and taking time off from work at the overwhelmed Kwong Wah hospital came as a relief.

Isolation wards with 40 beds now accommodate 60, some patients were being treated in corridors, and patients from general wards admitted for non-Covid reasons were later found to be positive and had infected other patients and nurses, who were also sent home.

“You keep adding beds, but not human resources,“ said Yee, who declined to give her last name, fearing repercussions at work. “My colleagues are overloaded - one to dozens of patients.”

Nurses and doctors at other hospitals say the situation is similar across Hong Kong’s health system, showing the limits of the government’s “dynamic zero-Covid” strategy as thousands of new cases are discovered each day. Daily infections have surged 70 times since the start of February.

At some hospitals, bedridden elderly and children were seen left for hours in carparks, waiting in the cold and rain, in scenes that shocked residents and many in the global medical community.

Kwong Wah Hospital told Reuters in a statement that it utilised “every feasible space” to accommodate patients, while infected staff would be sent to “appropriate” isolation facilities.

The city’s Hospital Authority said it was facing tremendous pressure and had implemented a new triage policy where priority would be given to elderly and paediatric patients in serious condition. The government did not respond to requests for comment.

Like mainland China, Hong Kong aims to eradicate any outbreaks at all costs, officially still targeting all infections and close contacts for compulsory testing, treatment and isolation.

Yee says the goal is “impossible.” Transmission could not even be prevented inside hospitals, she points out.

There were 837 infected medical staff as of Tuesday, authorities said.

“It may seem counterintuitive, but in a Covid pandemic the last place we want infectious people is in hospitals, unless they really need treatment,“ said David Owens, a founding partner of OT&P clinic.

“We are already seeing a sharp rise in illness and isolation in healthcare workers. It seems inconceivable that the health system can continue for long without a change in strategy.”

The government has started to adjust its hospitalisation and isolation policies based on severity, but keeps capacity at maximum levels and thousands of people are still flocking to hospitals, worried that they could spread the virus to family.

It is common for tiny flats in densely populated Hong Kong to house three generations of the same family, and many elderly are still unvaccinated, having become complacent after living in a mostly Covid-free environment in 2020-2021.

“This is a big problem,“ said David Chan, who heads the union Hospital Authority Employees Alliance, referring to people with mild or no symptoms showing up at hospitals.

“The government messaging has been that Covid is a very dangerous disease ... So it is very hard to blame the people.”

The government plans to ease the burden by building new isolation facilities and reconverting hotel rooms into quarantine space. More protective gear is also on its way and potentially even manpower from mainland China.

But many frontline health workers say such measures should have been taken in anticipation of an outbreak rather than in response to it.

For the past two years, Hong Kong could have encouraged elderly vaccination, increased quarantine capacity, and drawn plans to prioritise serious cases, keeping crowds with mild symptoms away from hospitals, doctors say.

“There was no plan,“ said Tony Ling, head of Hong Kong’s Public Doctors Association. “We are just unprepared.”

Doctors have “a fighting heart, but we are getting tired,“ he said. — Reuters