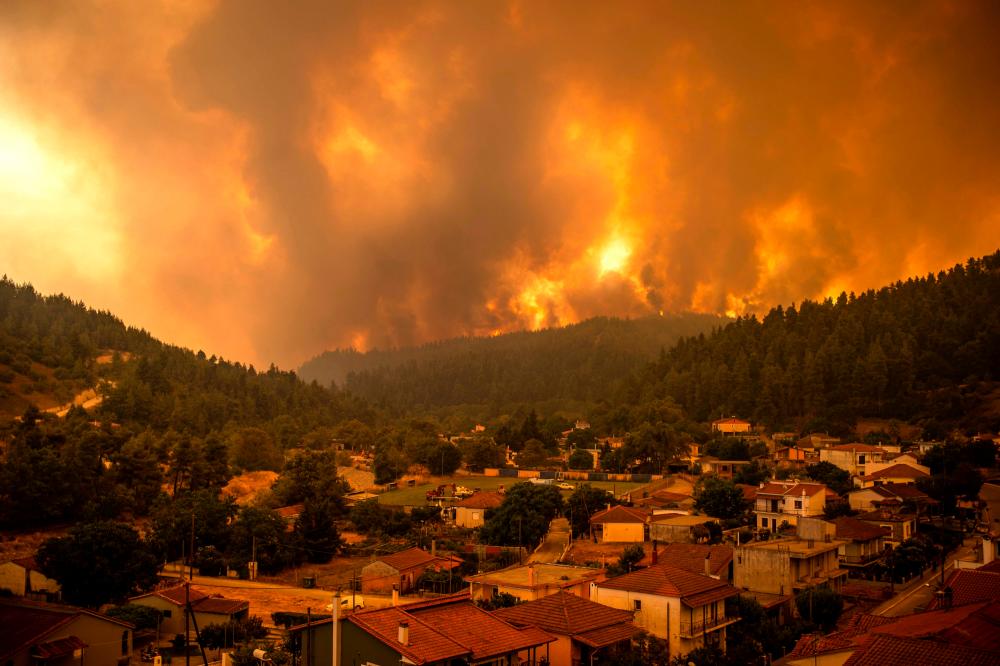 This picture taken on Evia (Euboea) island, second largest Greek island, on August 8, 2021 shows a wildfire moving towards the village of Gouves. — AFP

GREECE: Hundreds of Greek firefighters fought desperately Sunday to control wildfires on the island of Evia that have charred vast areas of pine forest, destroyed homes and forced tourists and locals to flee.

In all, 17 firefighting aircraft — planes and helicopters — were fighting the fires on Evia, he added.

Evia lies just northeast of the capital Athens. To the southwest is the Peloponnese region where Hardalias said the situation was stable. Fires in a northern suburb of Athens have subsided, he added.

“The situation in Attica (which encompasses Athens) is better but we are afraid of the danger of flare-ups”, said Hardalias.

Rescuers on Sunday dispatched a helicopter to airlift an injured firefighter from the densely forested Mount Parnitha just north of Athens where he was fighting a flare-up.

No respite for Greece

Greece and Turkey have been battling devastating fires for nearly two weeks as the region suffered its worst heatwave in decades, which experts have linked to climate change.

So far, the fires have killed two people in Greece and eight in neighbouring Turkey, with dozens more hospitalised.

While rain brought some respite from the blazes in Turkey over the weekend, Greece continues to endure soaring temperatures.

The rugged landscape and thick pine forests on Evia that so appeal to tourists have turned in into a nightmare for firefighters. The inferno on Greece’s second largest island has turned thousands of hectares into ashes and destroyed homes.

Authorities have continued to evacuate residents from Evia, with another 349 people taken to safety early Sunday, the Greek Coast Guard.

At the beach of Pefki, young people struggled across the sand, using chairs to carry mainly elderly and handicapped people on to a ferry.

Some 260 Greek firefighters with 66 vehicles were battling the blazes on Evia, helped by 200 more from Ukraine and Romania with 23 vehicles and the air support.

The heat from the fires on Evia and elsewhere was so intense that “the water from the hoses and the water-dropping aircraft was evaporating” before reaching the blazes, one fire service official told the Eleftheros Typos newspaper.

Local officials were critical of the efforts to control the fires, which erupted on the island on August 3.

“I have no more voice left to ask for more aircraft. I can’t stand this situation”, Giorgos Tsapourniotis, mayor of Mantoudi in Evia told Skai TV on Saturday.

Many villages had only been saved because young people had ignored evacuation orders and stayed on to keep the fires away from their homes, he added.

“We are in the hands of God,“ 26-year-old villager Yannis Selimis from Gouves on the north of the island.

“The State is absent. If people leave, the villages will burn for sure,“ he told AFP.

“For the next 40 years we will have no job and in the winter we are going to drown from the floods without the forests that were protecting us,“ he added.

Addressing the criticism Sunday, Hardalias said that smoke and the wind direction and the resulting poor visibility had hampered the work of the water-dropping aircraft.

But Nasos Iliopoulos, spokesman for the main opposition Syriza party, said many fires had burned out of control for days across Greece without high winds. Someone, he said, would have to take responsibility for the “truly tragic” devastation.

Already late Saturday, Hardalias said that provisional shelter had been provided to 2,000 people evacuated from the island.

In the previous 10 days alone, 56,655 hectares (140,000 acres) have been burnt in Greece, according to the European Forest Fire Information System. The average number of hectares burnt over the same period between 2008 and 2020 was 1,700 hectares.

Britain, France, Spain and other countries have answered Greece’s appeal for help, and on Sunday, Serbia announced it was sending 13 vehicles with 37 firefighters and three firefighting helicopters.

The Greek authorities meanwhile are on high alert to prevent more arsons.

Firefighters arrested three young men, aged between 16 and 21, Sunday morning at port city of Piraeus, near Athens, for attempted arson in nearby Perama.

In the Peloponnese, a 71-year-old man was arrested Sunday in Pylos.

And Athens police said Sunday they had arrested a foreigner at a park in Athens trying to light napkins at the root of a tree. — AFP

BKP payment of RM500 each to start Tuesday — PM