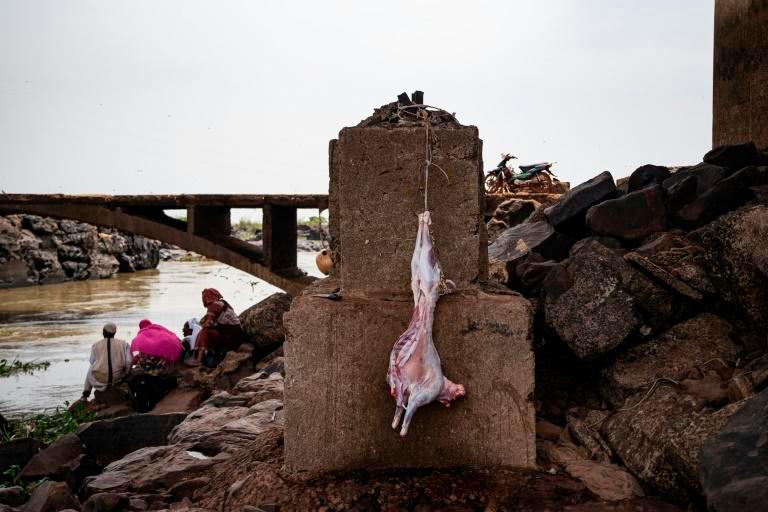 Goats, chickens, sheep and sometimes oxen are slaughtered at the sacred site. — AFP

BAMAKO: “There are evil spirits down there. They take people and their motorbikes and suck them into the river.”

Boucary Sagara is quite definite. He would prefer to make a lengthy detour rather than cross one of the three bridges that span the Niger River at Bamako.

In Mali, the structure is known as the “third bridge” or the “Chinese bridge” — it is the capital’s third and most recent crossing of the great river, built and financed by a Chinese company 11 years ago.

An old popular and animist belief holds that water djinns — supernatural creatures who can be benevolent or malicious — have always gathered at this precise spot, Souta Dounou, one of the holy places that line the river.

For worshippers, the djinns are still there, lurking beneath the imposing concrete span, 1,600 metres (5,250 feet) long.

While the place is sacred to believers, to others it is a place of malevolence.

Like many Bamako inhabitants, Sagara prefers to go half an hour out of his way and take another bridge rather than approach this “non-Muslim place.”

However, the banks under the “Chinese bridge” are far from deserted.

In the dry season, black sandstone rocks smoothed by strong currents poke up above the water level. They are turned red almost every day by the blood of animals sacrificed there: goats, chickens, sheep and sometimes oxen.

Snagged plastic bags dot the few shrubs. The annual rains, which began in early June, will wash all this away.

For more than 20 years, Assa Camara, in her 50s, has performed a ritual.

“I had a dream, I saw the djinn, he told me to come and make the sacrifices,“ she told AFP, sitting on a stone under the bridge and wearing an immaculate dress adorned with a talisman.

That same morning, a woman came to give her offerings including two chickens, three eggs, two cigarettes and milk. She asked Camara to intercede with the spirits.

Many leave with the meat of the animal they have sacrificed.

Thiam Diarra said he had come because he was the victim of a curse.

From a small stone bridge dating to French colonial times that survives under the Chinese bridge, Diarra emptied a bag of medicines into the water as a gift to the river and the djinns.

“This is to ward off bad spells that a marabout (witch doctor) has cast on me at someone’s request,“ he says.

Diarra, wearing a smart shirt and tight trousers, left quickly on his scooter to pursue his trade as a shopkeeper with a long working day.

“If the third bridge is one of those sacred places where (people believe) djinns might live, drownings at this part of the river have certainly amplified the phenomenon,“ says anthropologist Salia Male.

Believers present these drownings, as well as suicides - which are generally rare in Malian society - as “proof” of the existence of the djinns, together with traffic accidents in the immediate vicinity of the bridge.

Some claim to have seen a siren, others speak of a submerged village, or the immense hand of a djinn that snatches motorbike riders down under the water to their doom.

“This is just a myth. The reality was brought to light when the Chinese built the bridge,“ says Belco Ouologem, director of the Confucius Institute in Bamako, who also served as translator for Chinese company CGGC during construction.

“The company made studies in the river with a robot device. They discovered the presence of a large hole leading down to a water table. The hole makes a whirlpool and sucks down what falls into it,“ he adds. “It is a classic phenomenon.”

Large signs were displayed during the construction of the bridge to explain the geology of the site.

Chinese engineers “have built bridges over the sea — it’s not Malian djinns who are going to stop them,“ Oulogem quips.

“The Chinese are like everyone else, they made sacrifices in order to build their bridge!” counters Aliou Diarra, a spare-parts trader who comes every two weeks to make a sacrifice.

“It cannot be explained, that’s how it is,“ he said. “We must not stir things up too much, otherwise the djinns will get angry.” — AFP