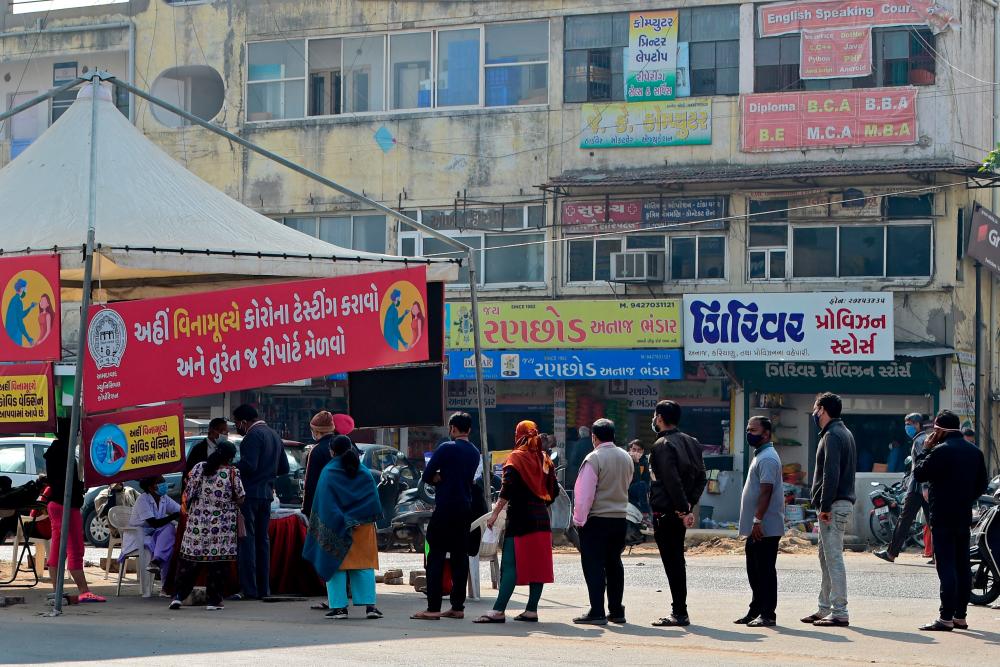 People stand in a queue to test for the Covid-19 coronavirus under a makeshift tent installed along a street in Ahmedabad on January 16, 2022. AFPPIX

NEW DELHI: India's capital Delhi and financial hub Mumbai have reported a big fall in COVID-19 infections in the past two days and most of those who contracted the virus have recovered at home, authorities said on Monday.

Mumbai's daily new infections fell below 10,000 on Sunday for the first time since early this month, after touching an all-time high of 20,971 on Jan. 7. It reported 7,895 infections late on Sunday, Mumbai's municipal corporation said.

Delhi's cases have fallen consistently since hitting a peak of 28,867 on Jan. 13 and is expected to be fewer than 15,000 on Monday, for the first time since early January, the city government's health minister told reporters.

Both cities have said more than 80% of their COVID-19 hospital beds have remained unoccupied since the fast-transmitting Omicron variant led to a massive surge in cases from the start of the year.

“With very large numbers of sub-clinical, asymptomatic and undetected cases, it is difficult to pinpoint a peak by new cases,“ Rajib Dasgupta, head of the Centre of Social Medicine & Community Health at New Delhi’s Jawaharlal Nehru University, said in an email.

Other epidemiologists say a national peak in cases could come by early- or mid-February.

Experts have attributed the low hospitalisations to high levels of previous infections and vaccination. India has fully vaccinated about 70% of its 939 million adults and hopes to give the primary two doses to another 70 million or so teenagers by next month.

The government has advised states to mainly ask only people with symptoms of COVID-19 to get tested instead of random checks like earlier that badly stretched resources, especially in the last major wave in April and May when millions were infected and tens of thousands died.

India's COVID-19 infections rose by 258,089 in the past 24 hours, the health ministry said on Monday, taking the tally to 37.38 million - the most in the world after the United States.

Deaths rose by 385 - nearly 40% of them due to a delayed recording of previous fatalities in the southern state of Kerala - for a toll of 486,451. Only the United States and Brazil have reported more total COVID-19 deaths. - Reuters