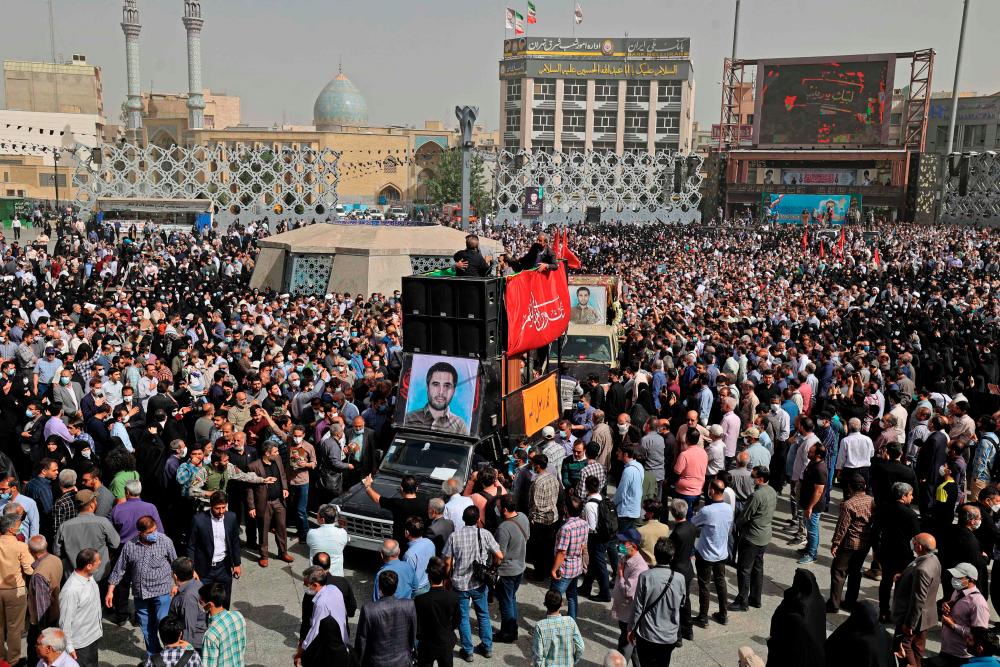 Mourners gather around the coffin of Iran's Revolutionary Guards colonel Sayyad Khodai during a funeral procession at Imam Hussein square in the capital Tehran, on May 24, 2022. AFPPIX

DUBAI: Iran held a funeral procession today in the centre of the capital Tehran for Revolutionary Guards colonel Hassan Sayad Khodai, who was shot dead by two people on a motorcycle, and his commander vowed to avenge the attack.

Mourners held portraits of Khodai, who was gunned down in broad daylight in front of his home in central Tehran on Sunday.

“Iran’s response to any threat or action will be harsh. But we will determine when and how it will be and in what circumstances. We will definitely take revenge on our enemies,” Revolutionary Guards commander Hossein Salami told reporters.

Iran has blamed such attacks on Israel.

“There is no doubt that the overt and covert support of ... the US plays an important role in increasing the audacity of the occupying regime (Israel),” foreign ministry spokesman Saeed Khatibzadeh told state media.

Separately, state television said the Guards had arrested members of a network of “thugs” recruited by Israeli intelligence to carry out sabotage and attacks in Iran.

The Israeli prime minister’s office, which oversees intelligence agency Mossad, has declined to comment on the events in Tehran.

Khodai was a “defender of the shrines”, Iranian state media said on Sunday, referring to military personnel or advisers who Iran says fight on its behalf to protect Shi’ite sites in Iraq or Syria against groups such as Islamic State.

The killing comes at a time of uncertainty over the revival of Iran’s 2015 nuclear deal with world powers after months of stalled talks.

At least six Iranian scientists and academics have been killed or attacked since 2010, several of them by assailants riding motorcycles, in attacks believed to have targeted Iran’s nuclear programme, which the west says is aimed at producing a bomb.

Iran denies this, saying the programme has peaceful purposes, and has denounced the killings as acts of terrorism carried out by western intelligence agencies and Mossad.