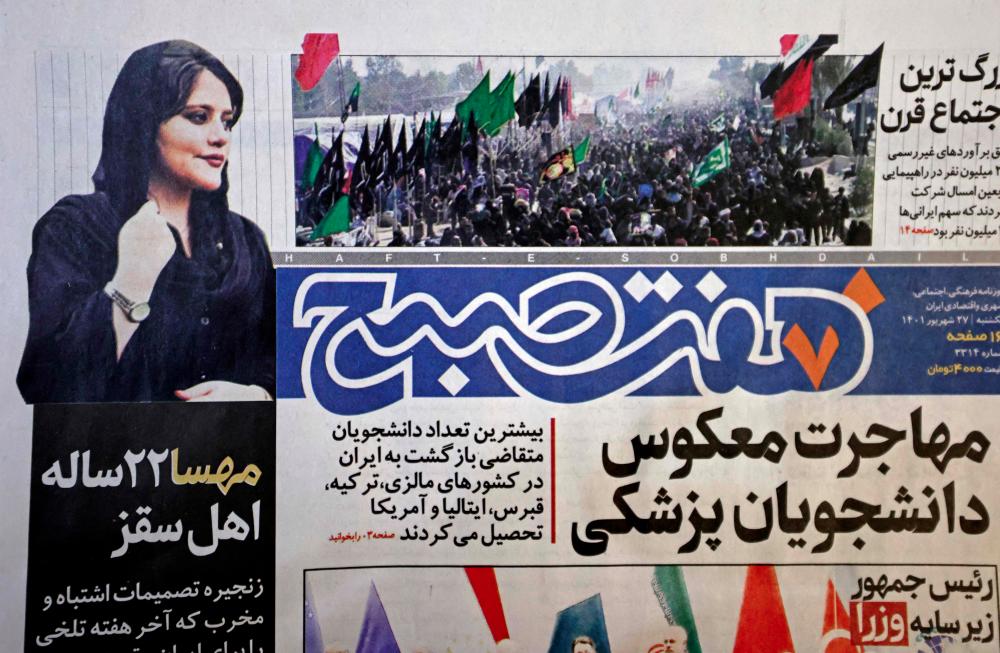 A picture taking in Tehran on September 18, 2022 shows the front page of the Iranian newspaper Hafteh Sobh featuring a photograph of Mahsa Amini, a woman who died after being arrested by the Islamic republic's "morality police" two days ago. - AFPPIX

TEHRAN: Iranian police used tear gas to disperse a protest over the death of a young woman who had been arrested by the “morality police” which enforces strict dress codes, local media reported Monday.

The security forces on Sunday arrested several of about 500 demonstrators in Sanandaj, northwestern Kurdistan province, Fars news agency reported, without specifying how many.

State media reported Friday that Mahsa Amini, 22, from the Kurdistan town of Saghez, had died in hospital after three days in a coma, following her arrest by Tehran police during a visit to the capital.

“About 500 people gathered in Sanandaj, capital of Kurdistan province, and shouted slogans against the country’s leaders,“ Fars reported.

Protestors “smashed the windows of some parked cars, set fire to bins”, and “police used tear gas to disperse the crowd”, the agency said. “Some people were arrested by the police.”

The morality police -- responsible for enforcing Iran’s strict dress code for women, notably the wearing of a headscarf in public -- had already faced growing criticism in recent months over its excessive use of force.

The capital’s police chief, General Hossein Rahimi, said Monday that the woman had violated the dress code, and that his colleagues had asked her relatives to bring her “decent clothes”.

At the end of July, the morality police had banned women from wearing coats that do not cover the knees, tight pants and ripped jeans, as well as brightly coloured outfits.

After the woman’s death, police claimed that there had been “no physical contact” between the officers and the victim.

However, “most of the protesters were not convinced by the police explanation,“ Fars said about Sunday’s demonstration.

“Many demonstrators are convinced that Mahsa died under torture.”

State television on Friday broadcast a short surveillance video that showed a woman identified as Amini collapsing in the police station after an argument with a policewoman.

Amjad Amini, the victim’s father, told Fars on Monday that he did “not accept what (the police) showed him”, arguing that “the film has been cut”.

He also criticised the “slow response” of the emergency services, adding: “I believe Mahsa was transferred to the hospital late.”

Interior Minister Ahmad Vahidi said Saturday he had received reports that the emergency service had “immediately” arrived at the scene.

“Mahsa apparently had previous physical problems and we have reports that she had undergone brain surgery at the age of five,“ Vahidi said.

Her father however “insists that his daughter had no history of illness and was in perfect health,“ Fars reported.

“I asked the coroner to examine the bruises on my daughter’s legs, but unfortunately he did not respond to my request,“ said the father, according to Fars.

The death has reignited calls to rein in morality police actions against women suspected of violating the dress code, in effect since the 1979 Islamic revolution.

Filmmakers, artists, athletes and political and religious figures have taken to social media to express their anger over the death, both inside and outside the country.