Iraq celebrates one year since ‘victory’ against IS 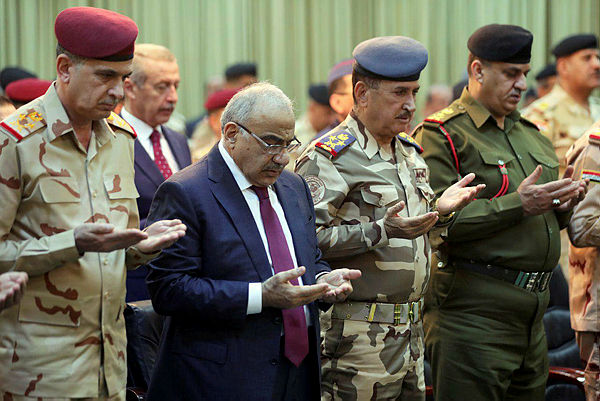 BAGHDAD: Iraq’s premier Monday marked a year since his country announced victory against the Islamic State group by pledging to root out corruption and ensure hundreds of thousands of displaced Iraqis return home.

One year since his predecessor announced the win, Prime Minister Adel Abdel Mahdi said Iraq had scored “the biggest victory against the forces of evil and terrorism” when it ousted IS from its territory.

“The final victory we hope for is achieving our people’s ambitions and hopes ... If we do not eliminate corruption, our victory will be lacking,“ Abdel Mahdi said in comments carried by state television.

“The return of refugees and the building of their cities is a goal we will make every effort to achieve,“ he said.

IS swept across a third of Iraq in 2014, including the major northern city of Mosul, which jihadists made the de facto capital of their “caliphate”.

Over the next three years, Iraqi government troops, paramilitary units, and US-led coalition forces battled to oust IS from the country.

They recaptured Mosul in June 2017, then worked to gain control of Iraq’s western border with Syria, whose porousness had long been exploited by jihadists.

In the early hours of Dec 9, then-premier Haider al-Abadi announced “victory” over IS.

Dec 10 has been designated an official holiday, and the government called for celebrations across the country on Monday.

It also said it would reopen part of Baghdad’s high-security Green Zone, where key government offices and western embassies are based, for five hours every evening starting Monday.

“Iraqis today are celebrating the anniversary of victory over the ugliest criminal assault that history has seen,“ President Barham Saleh said in a statement on Twitter.

“Our heroes achieved military victory at a high price, giving us the duty to achieve the final victory with a political, social, and cultural win,“ he said.

Abdel Mahdi and Saleh’s comments appeared to be nods to the host of issues still plaguing Iraq.

Much of the country remains in ruins, including large swathes of the north.

More than 1.8 million Iraqis are still displaced, many languishing in camps, and 8 million require humanitarian aid, according to the Norwegian Refugee Council.

And while IS no longer holds large chunks of territory, it can still wage hit-and-run attacks that chip away at the sense of security many hoped would return. — AFP