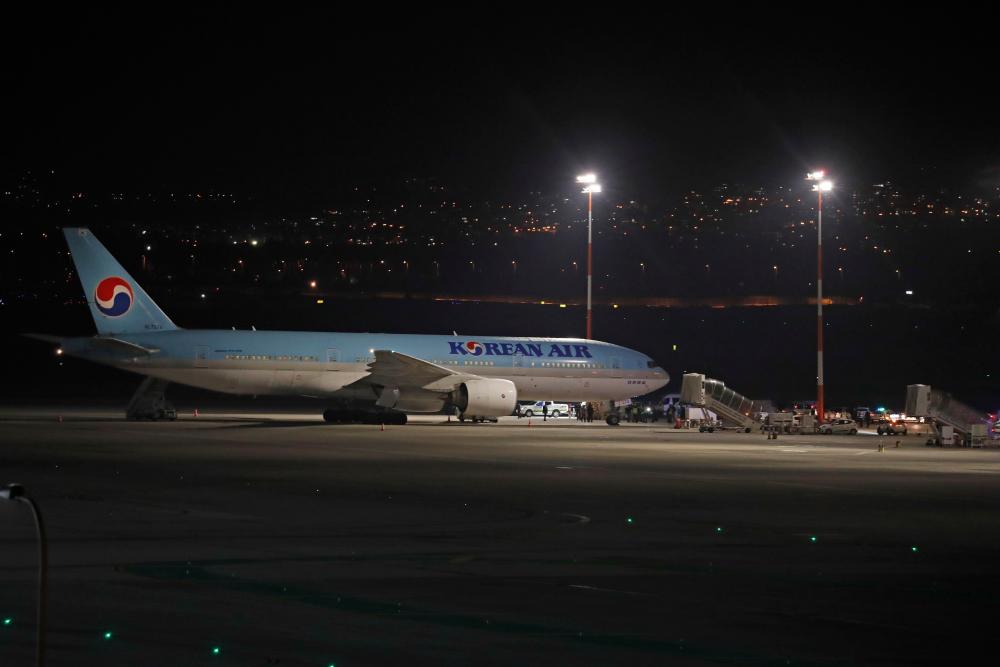 A Korean airplane which arrived from South Korea is pictured after landing at Ben Gurion International Airport on February 22, 2020. - AFP

JERUSALEM: Nearly 200 Israeli pupils were ordered to begin a two-week quarantine from Sunday after having come into contact with South Korean tourists who contracted the coronavirus, the education ministry said.

South Korean members of the Shincheonji Church of Jesus toured Israeli sites between Feb 8-15 and upon their return home 18 of them were discovered to be infected with the virus.

Israel’s health ministry urged people who might have encountered them to self-quarantine, including 180 pupils and 19 staff from three separate schools who it said had close contact with the South Korean visitors.

The pupils and staff, including 18 teachers and a guard, were instructed “to remain home” for 14 days, the education ministry said.

The health ministry also published a detailed list of the sites visited by the South Korean tourists, ordering “anyone who has been in touch with the pilgrims” to “home-quarantine until 14 days from the encounter with the group have passed”.

Israel on Friday confirmed its first case of the virus in one of its nationals who had flown home from Japan after being quarantined on the stricken cruise ship Diamond Princess.

On Saturday Israel refused to allow some 200 non-Israelis to disembark from a plane which arrived from South Korea, as part of measures against the new coronavirus.

And on Sunday, the health ministry said an entry ban would also apply to non-Israelis landing from Japan beginning Monday.

It also implemented an obligatory 14-day home-quarantine to any Israeli who has been to Japan, South Korea, mainland China as well as Hong Kong, Macau, Singapore and Thailand.

“In addition, anyone who has been in Taiwan, Italy or Australia in the past 14 days and is developing the disease’s symptoms should be examined,“ the ministry said in a statement. - AFP

Israel police in standoff with Palestinians over Jerusalem eviction

Teen who was ‘bathed like a corpse’ spared jail term

1.Israel police in standoff with Palestinians over Jerusalem eviction

2.Teen who was ‘bathed like a corpse’ spared jail term