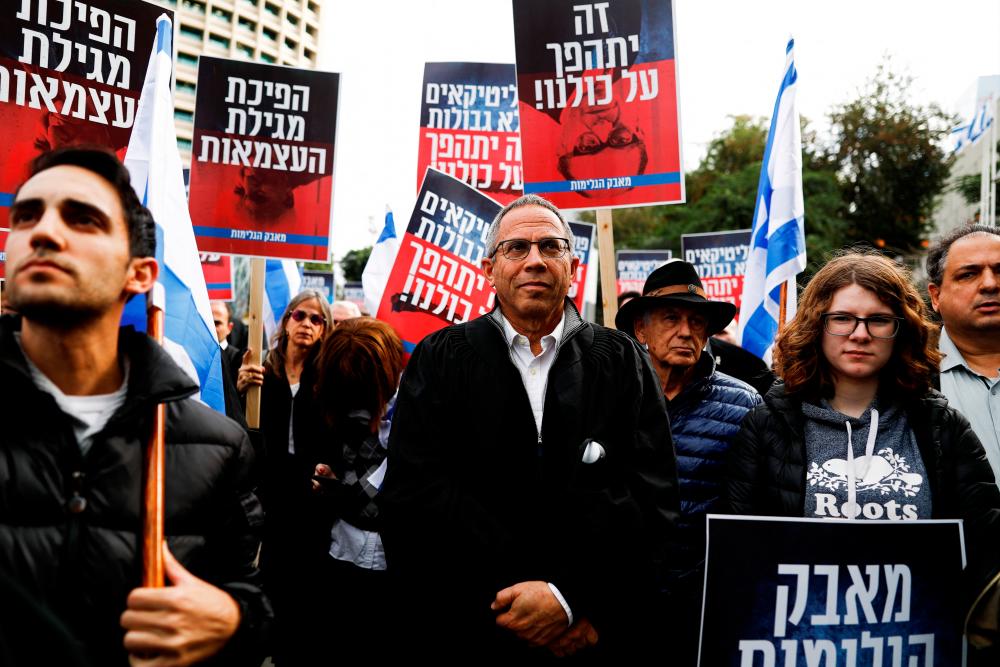 Private Israeli lawyers protest Netanyahu’s government court reform in what they call “a political threat to the judicial system and democracy” outside the Tel Aviv District Court, Israel January 12, 2023. REUTERSPIX

TEL AVIV: Hundreds of Israeli lawyers rallied Thursday outside a Tel Aviv court to protest against the government's controversial plans to overhaul the judicial system.

The rare demonstration by attorneys follows the justice minister outlining proposals such as allowing politicians to override Supreme Court decisions.

“The nomination of judges will be political. Court won’t be independent, but controlled by politicians,“ the 66-year-old said outside the district court.

Around 400 demonstrators joined the rally, an AFP journalist said, some waving Israeli flags.

Levin wants to hand more powers to members of parliament in appointing judges, which are currently picked through a panel of magistrates, lawyers and politicians, under the supervision of the justice ministry.

He has also proposed a “derogation clause”, which would allow parliament to annual a Supreme Court decision with a simple majority.

Analysts say such a clause could allow lawmakers to uphold any annulment of the corruption charges facing Prime Minister Benjamin Netanyahu, should parliament vote to absolve him and the Supreme Court then rule against it.

In an open letter published Thursday, a group of former state attorneys and attorney generals said they were “shocked” by Levin’s programme.

“We call on the government to retract the plan it published and prevent the severe damage to the court system and rule of law,“ wrote the 11 senior jurists, many of whom also served as Supreme Court judges.

In Tel Aviv, lawyer Bruria Lekner said the proposed measures amounted to “destruction and a regression.”

“We have to stop that,“ she told the crowd, as protesters chanted “shame!” and “we won’t let it happen!”

Announcing his reform programme last week, Levin said it is “up to the elected government to decide the laws”.

But the proposals were slammed Monday as “radical regime change” by opposition chief Yair Lapid, who said the plans amount to the “elimination of democracy”. - AFP