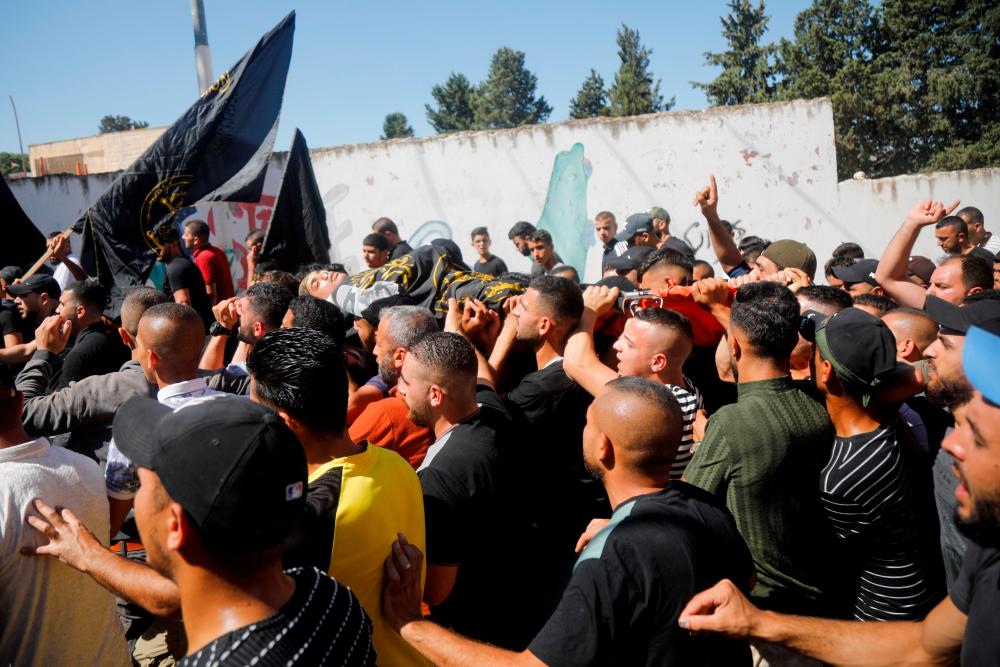 Mourners carry the body of Palestinian Osama Soboh, who was killed by Israeli forces during clashes in a raid, covered with Islamic Jihad flag, during his funeral in Burqin in the Israeli-occupied West Bank September 26, 2021. REUTERSpix

RAMALLAH, West Bank: Israeli troops killed five Hamas militants in gun battles during raids on Sunday against one of the group's cells in the occupied West Bank, an Israeli military spokesperson said.

Two soldiers - including an officer - were critically wounded in one of the incidents, the spokesperson added.

The shootouts marked the deadliest violence between Israel and Hamas since an 11-day Gaza war in May and threatened to raise tensions along the Israeli border with the coastal enclave and in the West Bank.

An uncle of one of the Palestinians killed said he was a 16-year-old walking to school when he was shot.

A military spokesperson said, “as far as we are concerned, all those killed were armed Hamas operatives, taking part in firefights”, but added he was checking the relative’s information.

Israeli officials have long voiced concern that Hamas, which runs the Gaza Strip, intends to gain strength in the West Bank and challenge its rival there, the Western-backed Palestinian Authority (PA), heightening security risks for Israel.

Palestinian President Mahmoud Abbas, whose Fatah party lost control of Gaza to Hamas in internal fighting in 2007, accused Israel in a statement of “field executions against our people”.

Hamas called on Palestinians in the West Bank “to escalate resistance against the occupier in all areas” after the raids. Hamas said four of its men were killed in the Israeli operation, and did not include the name of the fifth fatality in its list.

An Israeli military spokesperson said troops carried out five raids in the West Bank “in order to stop a Hamas terrorist organisation cell from operating” and launching attacks.

On a flight to New York, where he addresses the U.N. General Assembly on Monday, Israeli Prime Minister Naftali Bennett said the Hamas men were “about to carry out terrorist attacks”.

He said Israeli forces “engaged the enemy, and we back them completely”.

Israel captured the West Bank and Gaza in a 1967 war. It withdrew troops and settlers from the Gaza Strip in 2005.

The PA, which seeks a Palestinian state in the West Bank and Gaza, exercises limited self-rule in the territory under interim peace deals with Israel. Hamas advocates Israel's destruction. -Reuters