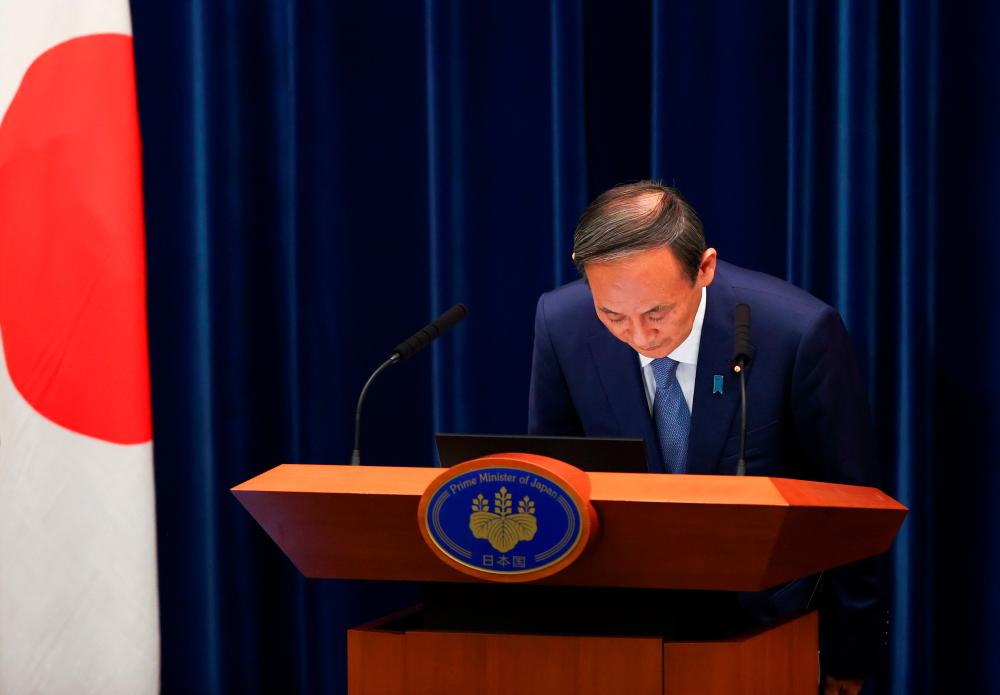 Japan’s Prime Minister Yoshihide Suga bows as he attends a news conference on Japan’s response to the coronavirus disease (Covid-19) pandemic, at his official residence during the Tokyo 2020 Olympic Games in Tokyo, Japan, July 30, 2021. -Reuters

TOKYO: Three prefectures in the Tokyo metropolitan area and Osaka entered into a Covid-19 state of emergency Monday due to a recent spike in coronavirus cases, joining the capital and Okinawa, amid fears of a medical system collapse during the Tokyo Olympics, according to Kyodo news.

The government of Prime Minister Yoshihide Suga has added Chiba, Kanagawa, Saitama and Osaka prefectures to areas under the emergency from Monday through Aug 31, it said while emergency period in Tokyo and Okinawa was also extended to the end of the month from the initially planned Aug 22.

The government is planning to show standards for easing restrictions with respect to the progress of inoculation of the population but the end of the epidemic is not in sight yet in the country.

Establishments serving alcohol or offering karaoke services in the six prefectures under the emergency are asked to suspend their business during the period, with the government providing money for compliance. Those not serving liquor are requested to close at 8 pm.

The report added that serving alcohol is banned and restaurants not serving liquor are requested to close at 8 pm in the five prefectures under the quasi-state of emergency as well, while governors are authorized to relax restrictions based on improvements in the situation, according to the government's policy.

The surge in infections comes amid the spread of the virus's highly contagious Delta variant, first detected in India, with the increase becoming particularly notable after a four-day weekend last month and fueling worries about the strain on the health care system in the country.

According to data released by the Health, Labor and Welfare Ministry, the number of Covid-19 patients taken care of at home stood at 18,927 as of July 28, 1.8 times the number in the previous week.

Bed occupancy rates in Tokyo, Saitama, Ishikawa, and Okinawa prefectures were 50 percent or higher, the level that the government's Covid-19 subcommittee designates as stage 4, the highest stage of alert.

The National Governors' Association on Sunday urged people to refrain from making trips across prefectural borders in principle, in the wake of the summer and Obon holidays, and in cases of making essential trips it asked people to take virus tests.

The association agreed in a meeting the same day to ask the central government to study ways to impose a lockdown to better contain the virus, particularly concerned about the transmission of the more contagious variant.

Suga has said earlier he believes legislation that would enable the government to impose hard lockdowns like many major cities abroad did last year would “not suit” Japanese people.

Suga told a press conference on July 30, “I will conduct antivirus measures to make this declaration the last (Covid-19) emergency.”

He also said the government will aim to have over 40 percent of the public fully vaccinated by late August. -Bernama