Japanese emperor stresses his peaceful reign ahead of abdication 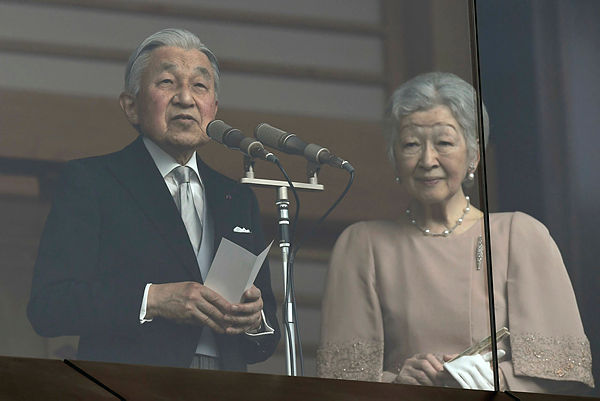 Japan’s Emperor Akihito delivers a speech while greeting wellwishers on his birthday beside Empress Michiko at the Imperial Palace on Dec 23, 2018. — AFP

TOKYO: In a rare emotional address ahead of his abdication next year, Japanese Emperor Akihito said he took “deep comfort” that his long reign had been one of peace as he remembered the “countless lives” lost in World War II.

Akihito, in a pre-recorded speech to mark his 85th birthday Sunday, also paid tribute to the Japanese people and Empress Michiko, the first commoner to join the tradition-bound imperial family who has been at his side for 60 years.

His voice trembling as he discussed the legacy of World War II, the emperor pointed to the “countless lives” lost in the conflict, which was fought under the name of his father Hirohito, who died in 1989.

“I have believed it is important not to forget that countless lives were lost in World War II and that the peace and prosperity of post-war Japan was built upon the numerous sacrifices and tireless efforts made by the Japanese people, and to pass on this history accurately to those born after the war,“ he said.

“It gives me deep comfort that the Heisei Era (his reign) is coming to an end, free of war in Japan,“ he said.

During his reign, the soft-spoken Akihito has used his speeches and travels to express his strong pacifist views, which are sharply at odds with the aggressive expansionism Japan pursued under his father’s rule.

His insistence on remembering history is in sharp contrast with conservative ideologues who have attempted to gloss over Japan’s wartime record.

The widely adored emperor will next year become the first Japanese royal to abdicate in more than two centuries.

His eldest son Crown Prince Naruhito will ascend the Chrysanthemum throne on May 1.

Akihito said his reign had been a quest to determine the role of the emperor as a “symbol of the state” under Japan’s pacifist post-war constitution, in contrast to his father Hirohito who was regarded as semi-divine.

And he thanked Empress Michiko for standing by his side.

“As I come to the end of my journey as emperor, I would like to thank from the bottom of my heart the many people who accepted and continued to support me as the symbol of the state,“ he said, his voice quavering.

“I am also truly grateful to the empress, who herself was once one of the people, but who chose to walk this path with me, and over 60 long years continued to serve with great devotion both the imperial family and the people of Japan.”

Akihito has worked to bring the royal household closer to the people and frequently visited the disadvantaged and families hit by natural disasters. — AFP