Lebanon to vote in first election since financial meltdown 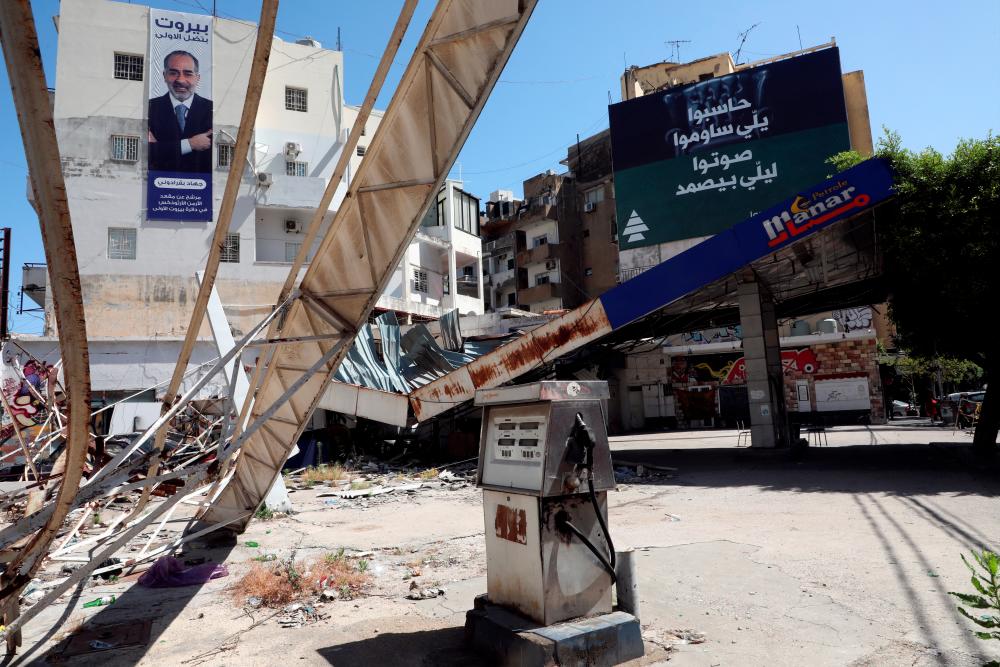 Electoral campaign posters are pictured near a gas station damaged in the August 2020 port blast, ahead of the parliamentary election, in Mar Mikhael neighborhood, in Beirut, Lebanon May 13, 2022. REUTERSpix

BEIRUT: Lebanese vote on Sunday in the first election since their country's economic collapse, a test of whether Iran-backed Hezbollah and its allies can preserve their parliamentary majority amidst soaring poverty and anger at ruling parties.

Expectations are however low for a big shake-up of Lebanon's sectarian politics and government, despite the severity of a crisis which the World Bank says was orchestrated by the ruling class, and fury over the devastating Beirut port blast of 2020.

The meltdown marks Lebanon's most destabilising crisis since the 1975-90 civil war. It has seen the currency sink by more than 90%, left about three quarters of the population in poverty and frozen savers out of deposits in paralysed banks.

Analysts believe reform-minded candidates could win some seats this time, but reformers have long struggled to penetrate a sectarian system that divides parliament's seats among 11 religious groups and is skewed in favour of established parties.

Those results pulled Lebanon deeper into the orbit of Shi'ite Muslim-led Iran, marking a blow to the influence of Sunni Muslim-led Saudi Arabia.

Hezbollah has said it expects few changes from the make-up of the current parliament, though its opponents - including the Saudi-aligned Lebanese Forces, another Christian group - say they are hoping to scoop up seats from the FPM.

Adding a note of uncertainty, a boycott by Sunni leader Saad al-Hariri has left a Sunni vacuum which both Hezbollah allies and opponents are seeking to fill. Riyadh, Hariri's regional backer for years before their ties soured, has not declared support for a new Sunni leader ahead of the vote.

Raising the stakes, the parliament is due to elect a new president to replace Aoun, whose term ends on Oct. 31.

Whatever the outcome, analysts say Lebanon could face a period of paralysis that could further delay reforms needed to address the crisis, as factions barter over portfolios in a new power-sharing cabinet - a process that can take months.

The outgoing government clinched a draft agreement with the IMF in April - conditional on long-delayed reforms.

Prime Minister Najib Mikati, a tycoon serving his third stint as premier, could be named to form the new government, sources from four factions told Reuters. Mikati told Arabic broadcaster Alhurra on Wednesday he was ready to return as premier if he was certain of a quick cabinet formation.

Nabil Bou Monsef, deputy editor-in-chief of Annahar newspaper, said he expected political paralysis after the vote, for which he said opposition candidates had failed to create a single front to compete against established parties.

“This political class as a whole has rebounded strongly because opposition forces collapsed - and didn’t know how to get their affairs in order.”

Following months of uncertainty over whether the election would go ahead, polls will open at 7:00 a.m. (0400 GMT) across 15 electoral districts. Nationals over the age of 21 vote in their ancestral towns and villages, sometimes far from home.

Turnout was 60% among expatriates who voted early, with many saying they want change.

Reform-minded candidates have focused on accountability for the economic crisis, ranked by the World Bank as one of the top three declines since the Industrial Revolution, and for the 2020 chemical explosion at Beirut's port, which killed more than 215 people and shattered swathes of the city.

The disaster is seen as a symbol of corrupt governance for which no top official has been held to account.

Yet as the election drew close, another divisive issue took centre-stage: Hezbollah's arms.

Hezbollah chief Sayyed Hassan Nasrallah, whose organisation is designated as a terrorist group by Western governments including the United States, has said a vote for his party would help “defend Lebanon”.

Former prime minister Fouad Siniora, a fierce Hezbollah critic who is backing like-minded Sunnis in the election, has sought to counter a Sunni boycott, calling on voters to “preserve Lebanon’s Arabness”, a push against Iranian sway.

“For me, the most important trend is more polarised politics after the elections, along pro-Hezbollah and anti-Hezbollah lines,“ said Mohanad Hage Ali of the Carnegie Middle East Center. — Reuters