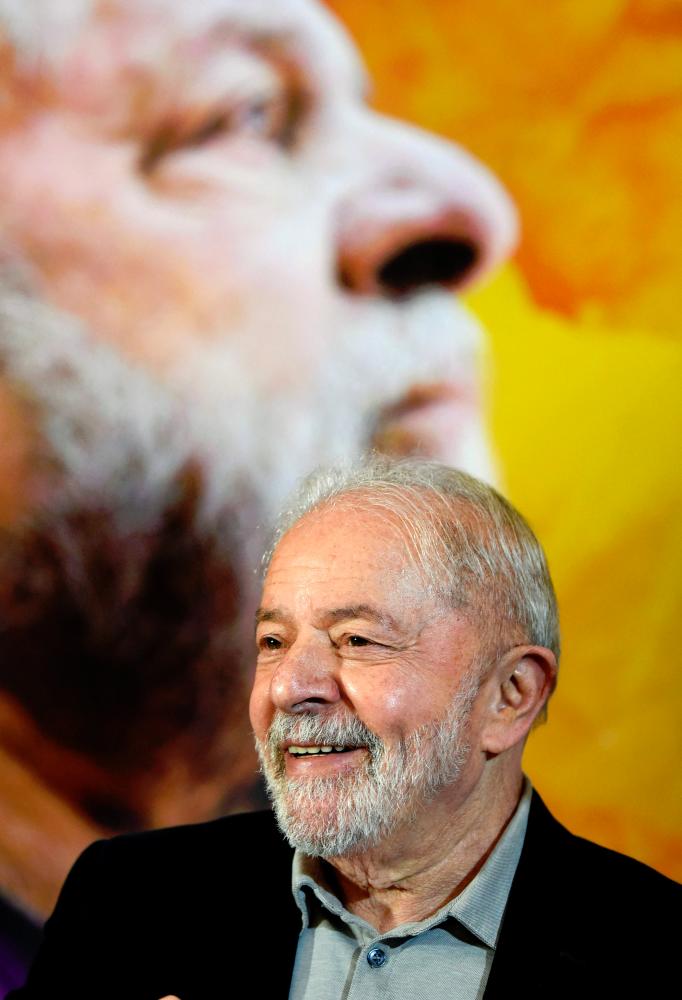 In this file photo taken on April 28, 2022, former Brazilian President Luiz Inacio Lula da Silva smiles during a meeting in Brasilia with members of the Red Party to discuss the party’s support for his candidacy in the upcoming October elections. - AFPpix

More than a decade after leaving office as the most popular president in Brazilian history, the charismatic but tarnished 76-year-old is expected to officially declare a new run at a huge rally in Sao Paulo.

It was hardly a secret Lula, who has enjoyed a long -- though shrinking -- lead in the polls, would jump into the campaign, which does not officially start until August.

The leftist icon has been in unofficial campaign mode since March last year, when the Supreme Court annulled the corruption convictions that sidelined him from politics.

The Supreme Court’s finding of bias on the part of the lead judge in the case, Sergio Moro -- who went on to become Bolsonaro’s justice minister -- had the instant effect of setting up this year’s elections as a polarizing clash between arch-enemies Lula and Bolsonaro.

“In truth, I never gave up,“ Lula told Time magazine in an interview published Wednesday.

“Politics lives in every cell of my body, because I have a cause. And in the 12 years since I left office, I see that all the policies I created to benefit the poor have been destroyed.”

Lula (2003-2010) left office with approval ratings of 87 percent, after presiding over an economic boom that lifted some 30 million Brazilians from poverty.

But the onetime shoeshine boy’s towering legacy came crashing down with the explosion of “Operation Car Wash,“ a sweeping investigation that uncovered a massive corruption scheme centered on state-run oil company Petrobras.

Lula was convicted of multiple bribe-taking charges and sentenced to a total of 26 years in prison.

He started his sentence in April 2018, removing him from that year’s presidential race, which Bolsonaro won on a wave of outrage against Lula and his Workers’ Party (PT).

Lula, who calls the case a conspiracy, was released pending appeal in November 2019 but was barred from politics until the Supreme Court ruling last year.

In a Brazil deeply divided over Bolsonaro’s combative style, social media polemics, weak performance on the economy and chaotic handling of Covid-19, Lula returned to the ring with the immediate status of front-runner.

At one point, he looked set to beat Bolsonaro outright in the first-round vote on October 2, without needing a runoff on October 30.

But Bolsonaro, 67, has narrowed the gap in the latest polls -- and made it clear he won’t leave power without a fight.

Lula, who has no obvious successor on the left, has meanwhile made a series of recent gaffes, alienating voters from several key groups with politically tone-deaf remarks on abortion, the police and the middle class.

He has also looked out of sync with world leaders he aspires to rub elbows with again -- saying, for example, that Ukrainian President Volodymyr Zelensky is “as responsible as” Russian counterpart Vladimir Putin for the Ukraine war, a stance that puts Lula at odds with Western powers.

“And, above all, Lula needs to go to the street,“ he said, rather than simply ride his legacy from the 2000s.

Seeking to attract young voters and reduce Bolsonaro’s dominance on social media, the septuagenarian -- who does not have his own cell phone -- has recently tried to gain traction online, posting pictures of himself in sleek sunglasses or holding a lightsaber and tweeting the Star Wars-themed meme “#MayThe4thBeWithYou.”

Courting the wary business sector and seeking to build a broad base, Lula has tapped market-friendly centrist Geraldo Alckmin -- the opponent he defeated in the 2006 presidential race -- as his running-mate. - AFP