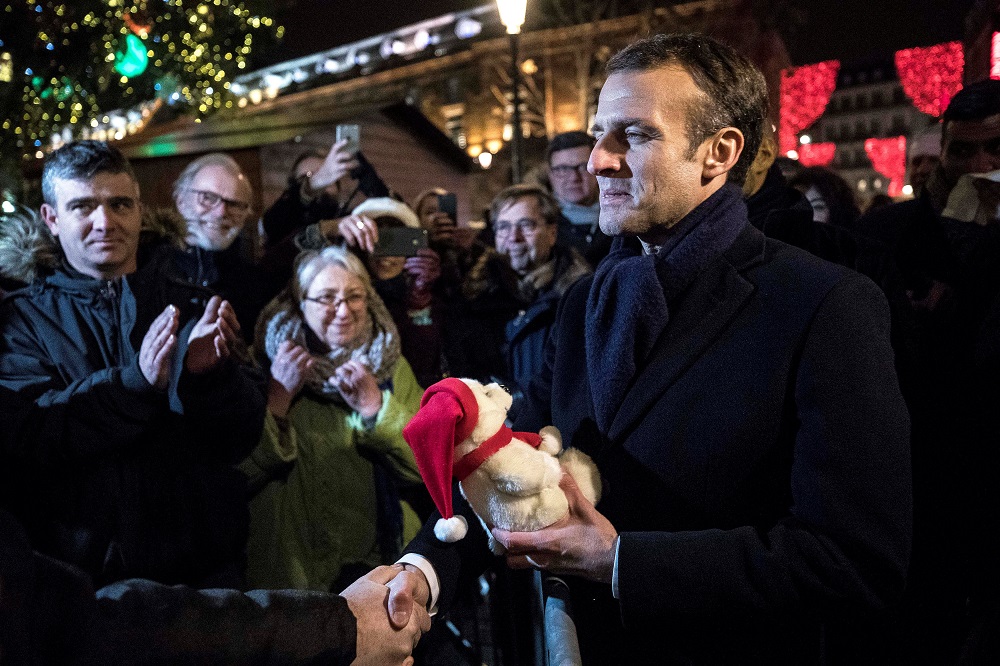 French President Emmanuel Macron receives a gift from a visitor as he visits the Christmas market in Strasbourg Dec 14, 2018. — Reuters

STRASBOURG: French President Emmanuel Macron visited Strasbourg yesterday, a day after police shot dead a gunman who killed four people at the city’s Christmas market, as investigators probe whether the jihadist had any accomplices.

Macron placed a white rose on the Kleber monument, which has become a makeshift memorial in the centre of the city with thousands of candles, flowers and messages, as soldiers sang the Marseillaise national anthem.

“The whole nation stands with the people of Strasbourg. This is what I wanted to tell them tonight,” said Macron, who had earlier taken part in a European Union summit in Brussels.

Annette, 80, one of the hundreds attending the Strasbourg memorial, said she “came to pray for those who are no longer here”.

The eastern French city near the German border slowly began to return to normality yesterday, with its famous Christmas market reopening after 29-year-old Cherif Chekatt, a small-time criminal turned jihadist, went on a shooting spree there on Tuesday evening.

He shot dead a Thai tourist, on holiday in Strasbourg with his wife, an Afghan who sought refuge in France some 20 years ago, a 28-year-old Italian journalist in town to cover the European parliament, and a local Frenchman who had just retired.

Twelve people were also wounded in his attack, including one who has been declared brain-dead.

The Islamic State group’s propaganda arm said in a Twitter post that Chekatt was one of its “soldiers”, a claim which was dismissed yesterday by France’s Interior Minister Christophe Castaner as “completely opportunistic”.

How police found him

France’s anti-terror prosecutor Remy Heitz said the investigation was now focusing on whether anyone “helped or encouraged Chekatt preparing or carrying out” the attack — or assisted him while he was on the run.

Another brother, who like Chekatt was on France’s anti-terror watchlist for suspected extremists, has been detained in Algeria, sources close to the inquiry told AFP.

Officials praised the massive public help and quick police reaction that led to the death of Chekatt, a career criminal with 27 convictions in four countries, late on Thursday.

He was tracked down at around 9:00 pm (2000 GMT) when a police patrol spotted him on a street in the Neudorf district where he was last seen after his gun and knife attack on Tuesday night.

Around 800 people called in tips to a hotline after the authorities released his name and photo Wednesday night.

The information allowed police to cordon off an area while a helicopter equipped with a heat-seeking camera flew over the gardens.

Spotted by a police patrol, Chekatt tried to escape by entering a building.

Unable to get in the door, he turned and shot at the three officers with a handgun as they tried to approach.

‘We can’t search everyone’

Questions remain over how Chekatt was able to evade the tight security perimetre set up around the Christmas market, a prime target for jihadist groups.

Around 500 police, security agents and soldiers control access at checkpoints on the bridges leading to the river island, a UN World Heritage site, that houses the market.

The goal is to “create a bubble with searches at the entry points,” Mayor Roland Ries said after the attack, while regional government representative Jean-Luc Marx said he had not determined “any flaws in the security measures”.

France has been on high alert since the start of a wave of jihadist attacks in 2015, which prompted a threefold surge in the security budget for the market, to one million euros.

Chekatt, a Strasbourg native who lived in a rundown apartment block a short drive from the city centre, was flagged by French security forces in 2015 as a possible Islamic extremist.

But Defence Minister Florence Parly rejected criticism that Chekatt’s presence on the extremist watchlist should have prompted a more proactive reaction from the authorities.

“You can’t... arrest someone just because you think he might do something,” Parly told Radio Classique yesterday.

Strasbourg’s deputy mayor Alain Fontanel admitted that despite patrols, plainclothes police, profilers and video surveillance, “the risks can be reduced, but not eliminated”.

“We can’t pat down and search everyone, only carry out random checks,” he said, adding that huge lines at checkpoints would only create a new potential target for terrorists.

“Someone who wants to get in an area this big with a weapon can do it,” he said. — AFP