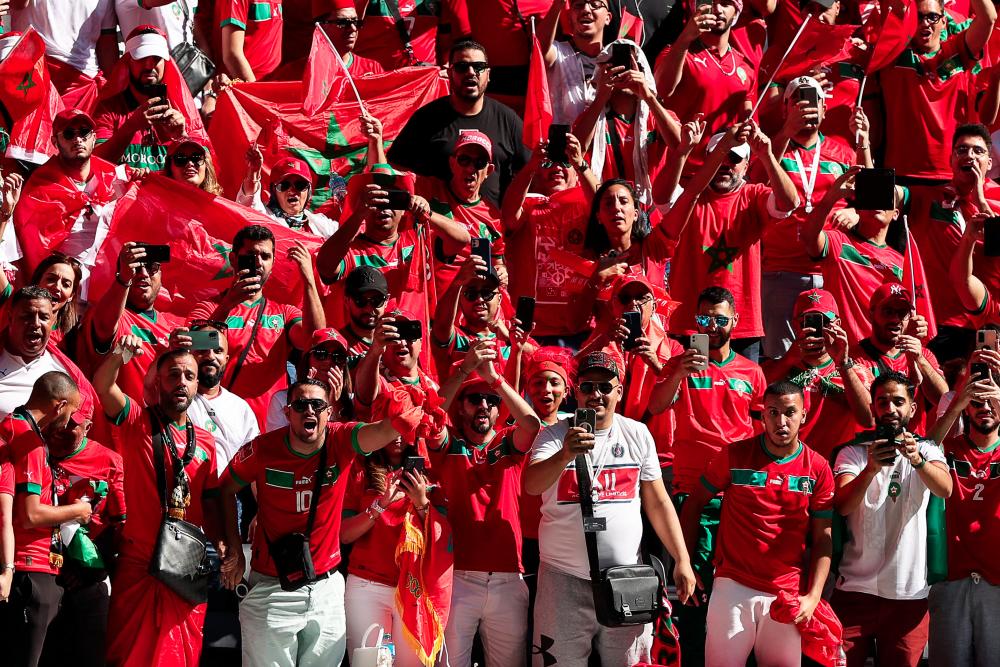 Fans of Morocco cheer on the stands ahead of the Qatar 2022 World Cup Group F football match between Morocco and Croatia at the Al-Bayt Stadium in Al Khor, north of Doha on November 23, 2022. - AFPPIX

BEIJING: Images of maskless crowds at the World Cup in Qatar have sparked anger in China, where people worn out by harsh Covid-19 restrictions are questioning their government’s exceptional approach while the rest of the world lives alongside the virus.

China is the last major economy still attempting to stamp out the domestic spread of Covid-19, and has continued to shut down entire cities, seal off neighbourhoods and impose mandatory tests on millions.

Driven by the fast-spreading Omicron variant, daily cases in the country hit 29,157 on Wednesday -- low compared to most other countries but nearing the domestic record set earlier this year.

Authorities have put more than a quarter of the Chinese population under some form of lockdown as of Tuesday, according to Nomura analysts -- a contrast with the raucous World Cup crowds that have infuriated many Chinese social media users.

“Some people are watching World Cup matches in person with no masks, some have been locked at home for a month, locked on campus for two months without even being able to step out the door,“ a Guangdong-based user on the Twitter-like Weibo platform wrote on Wednesday.

Another Weibo user from Shaanxi province said they were “disappointed” in their country.

“The World Cup has allowed most Chinese people to see the real situation abroad, and worry about the economy of the motherland, and their own youth,“ the user wrote.

An open letter questioning the country’s Covid-19 policies and asking if China was “on the same planet” as Qatar spread on the popular WeChat messaging app on Tuesday, before censors removed it from the platform.

World Cup matches are aired in China by state-owned CCTV -- the same broadcaster that has bombarded domestic audiences with negative reports of mass deaths and chaos caused by Covid in geopolitical rival the United States.

“Nigeria’s anti-epidemic work has clear results... we don’t learn from Nigeria, and only look at US data, what is the real meaning of this for our epidemic prevention?” the open letter asked.

Public anger over the seemingly arbitrary restrictions and sudden disruptions has recently erupted in rare protests, including in southern China’s Guangzhou this month where hundreds of residents took to the streets in defiance of a compulsory lockdown. - AFP