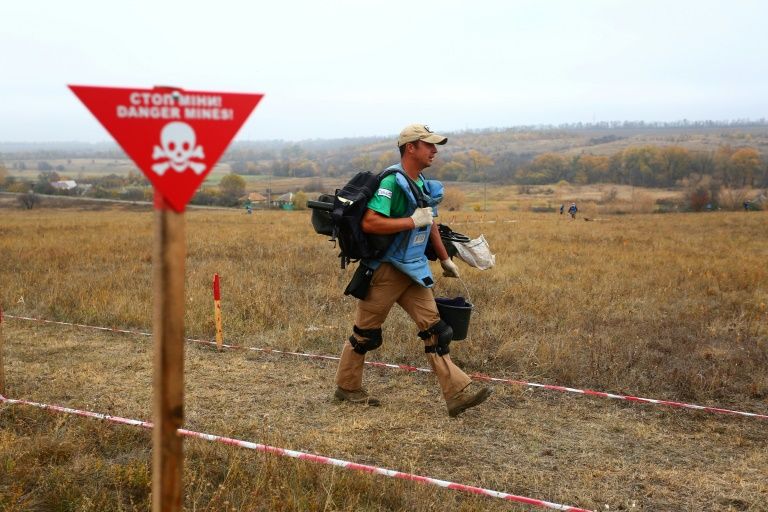 The pine-fringed village’s former pasture is cordoned off and marked by signs reading ‘Danger, mines’ in English. — AFP

Chugynka, Ukraine: Outside the picturesque Ukrainian village of Chugynka, dozens of men and women in bulletproof vests kneel down and explore every inch of ground.

The faded grass lies in the middle of a war zone that has become one of the most mine-riddled areas in the world over the past few years.

“The whole village used to use the field” for making hay and grazing cows, said Anatoliy Radchenko, a former entrepreneur who now leads the group of around 30 face-masked workers.

“We are doing this mine clearing for them, so that one day we can say — guys, you can use it, everything is fine here now.”

The pine-fringed village’s former pasture is cordoned off and marked by signs reading “Danger, mines” in English.

“For someone driving a tractor there’s always the risk of a mine exploding,“ says Andriy, a 32-year-old farmer who lives in Chugynka with his family and earns his living from producing grain.

“But you have to work anyway,“ he sighs, after telling how a farmer he knows was injured during the harvest this year.

Chugynka is just 25km west of the frontline in a war between Ukraine government forces and Russian-backed separatists.

The conflict has claimed more than 10,000 lives since it broke out in 2014 following a pro-Europe uprising in Kiev and Moscow’s annexation of the Crimean peninsula.

Russia denies claims it is funnelling troops and arms across the border to fuel the conflict, despite overwhelming evidence to the contrary.

Meanwhile, the UN says that more than 1,600 civilians have been killed or wounded by mines during the war.

That includes children — three of whom died while another was injured in the area in Sept.

A further two million Ukrainians, including 220,000 children, remain at risk.

Equipped with metal detectors, the group near Chugynka hunt for mines, marking the spot where they find one with a small flag.

They immediately report the find to emergency services that can neutralise the threat.

The Ukrainian de-mining team was formed in 2016 and is funded by The Swiss Foundation for Mine Action (FSD).

The work is dangerous and slow, however. In six weeks, the team has covered less than five percent of the 74,000-square metre area.

Two other humanitarian organisations, The HALO Trust and Danish Demining Group work in mine clearance in Ukraine. But the trio only work in areas of the country controlled by Kiev.

On the other side of the frontline, in the so-called Lugansk and Donetsk People’s Republics, the problem is the same.

Separatist authorities there carry out mine clearance operations themselves, without revealing the size of the affected areas.

‘Some blame the parents’

The Organization for Security and Co-Operation in Europe estimated in a report last week that 7,000 square kilometres are mined in Eastern Ukraine.

That makes it “one of the most densely mined areas in the world,“ the OSCE says.

Alexander Hug, then deputy head of the OSCE ceasefire monitoring operation in Ukraine, told AFP a few months ago that both sides continued to set mines without marking them.

This runs counter to 2015 peace agreements that have curbed the overall violence.

“I think we will suffer for a very long time,“ Ivan Prykhodko, the separatist head of the city of Gorlivka in Donetsk, told AFP.

More than two percent of Bosnia-Hercegovina is still thought to be affected by mines, according to OSCE data from 2017, even though fighting ended there more than 20 years earlier.

In Ukraine, military specialists have only been able to confirm 0.6% clearance of the total affected area.

As efforts by groups like the FSD continue, landmines’ horrific effects are felt all too keenly in the country’s east.

“Some believe that parents are guilty of letting boys walk alone, others — that children are guilty because they have not noticed the warning sign”, said Vladimir Tulup, grandfather of the local boy who survived the explosion in Sept.

“But they are not to blame, this goddamn war is to blame,“ he told AFP. — AFP 1.Romania cracks down on illegal logging

4.Messi in the 100 club as Argentina streak continues with Jamaica defeat