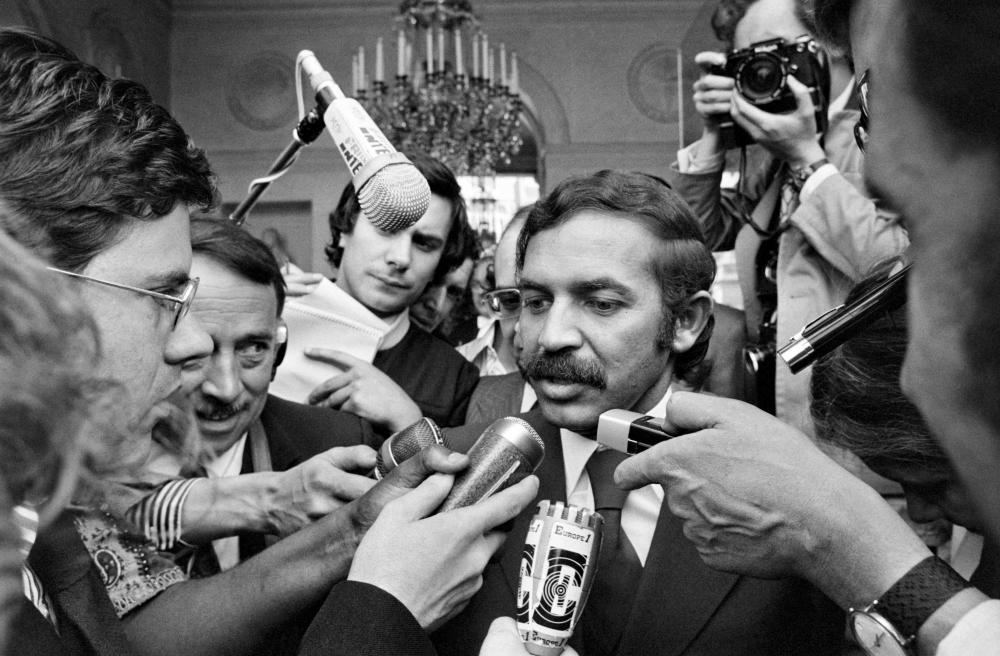 ALGIERS: Abdelaziz Bouteflika(pix) who ruled Algeria for two decades before resigning in 2019 has died aged 84, leaving behind mixed reactions ahead of Sunday's funeral.

The former strongman quit office in April 2019, having been abandoned by the military following weeks of huge street protests over his bid to run for a fifth presidential term.

He had since stayed out of the public eye at a residence in western Algiers.

The announcement of his death late Friday triggered muted reactions in the North African country, reflecting his absence from public view.

A statement from his successor Abdelmadjid Tebboune noted Bouteflika's past as a fighter in the war for independence from France and said flags would be at half-mast for three days to honour him.

King Mohammed VI of Morocco on Saturday sent a message of “condolences and compassion” to Tebboune, the MAP news agency reported.

“In more ways than one, president Abdelaziz Bouteflika has marked the history of the country since national independence...,“ said political scientist Mansour Kedidir.

“His name will remain engraved in the collective memory, despite his detractors.”

But on the streets of the capital Algiers, many residents told AFP the once-formidable president would not be missed.

“Bless his soul. But he doesn’t deserve any tribute because he did nothing for the country,“ said greengrocer Rabah.

Without fanfare, state television announced that Bouteflika would be laid to rest Sunday at El-Alia cemetery, east of Algiers, where his predecessors and other independence fighters are buried.

Preparations appeared to be underway for him to lay in state at the capital's People's Palace ahead of the funeral.

His brother Said, jailed on corruption charges, has been authorised to attend, his lawyer Salim Hadjouti told the Arabic website SabqPress.

Bouteflika became president of Algeria in 1999 as the former French colony emerged from a decade of civil war between Islamists and the army that killed nearly 200,000 people.

He won three more consecutive five-year terms, the latest in 2014.

Dubbed “Boutef” by Algerians, he won respect as a foreign minister in the 1970s and then for helping foster peace after the civil war, notably with an amnesty law that prompted thousands of Islamist fighters to hand in their weapons.

Journalist Farid Alilat, who wrote a biography of Bouteflika, says that at the height of his rule in the early 2000s, the president had “all the levers of power”, and was was backed by the army and the intelligence services.

Algeria was largely spared the uprisings that swept the Arab world in 2011. Many credited memories of the civil war -- as well as a boost in state handouts -- for keeping a lid on tensions.

But Bouteflika's rule was marked by corruption, leaving many Algerians wondering how a country with vast oil wealth could end up with poor infrastructure and high unemployment that pushed many young people overseas.

On the streets of Marseille, the home city in France of a large community of Algerian origin, some residents praised the long-serving president.

“He fought the fundamentalists, the terrorists (in the 1990s). He did a lot. He brought peace with the amnesty,“ said resident Hamid.

In his later years, Bouteflika's ill health started weighing on his credibility as a leader.

Despite suffering a mini-stroke in April 2013 that affected his speech and forced him to use a wheelchair, he decided to seek a fourth mandate.

His bid in 2019 for a fifth term sparked angry protests that soon grew into a pro-democracy movement known as “Hirak”.

When he lost the backing of the army, he was forced to step down.

The Hirak protests continued, with demands for a full overhaul of the ruling system in place since Algeria's independence from France in 1962.

Some key Bouteflika-era figures were eventually jailed in corruption cases, including his once-powerful brother Said.

Bouteflika's successor Tebboune was elected in late 2019 on a record low turnout, with the Hirak calling for a boycott.

But the protest movement was suspended because of the coronavirus pandemic and has struggled to regain momentum as the government cracks down on opposition.

With the Bouteflika-era old guard still largely ruling the country, his legacy is mixed.

For analyst Hasni Abidi, despite his long and undisputed stretch in power, Bouteflika failed to enact “any political, institutional or economic reform”.-AFP

1.Time for IRB to swtich emphasis from tax enforcement to improved tax compliance