Mourners and protesters turn out for slain ex-PM Abe 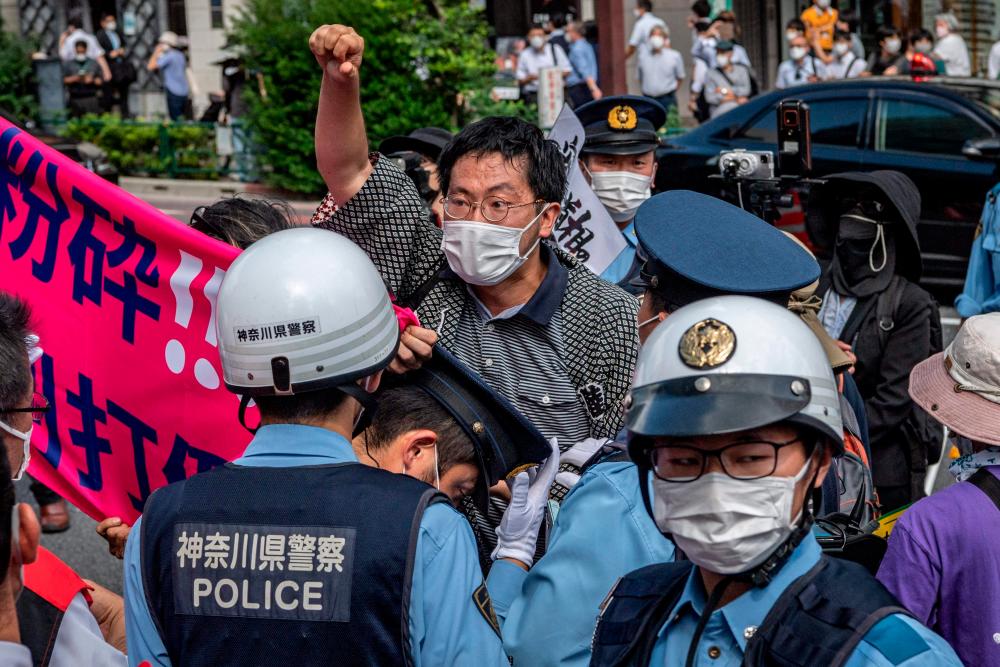 Protesters take part in a demonstration against the state funeral for Japan’s former prime minister Shinzo Abe near the funeral’s location at the Nippon Budokan in Tokyo on September 27, 2022. AFPPIX

TOKYO: The line began forming early on Tuesday, with thousands of Japanese people waiting to offer flowers and prayers for slain former premier Shinzo Abe, even as others marched nearby in protest.

The decision to hold a state funeral for the assassinated ex-leader split public opinion, and the rival scenes in Tokyo laid bare the divisions.

Foreign dignitaries joined Japanese officials for the ceremony inside the Budokan. Outside the storied venue, businessmen, retirees and teenagers waited in the late September sunshine, some of them dusted by cooling mist jets.

The line was so long that authorities opened two mourning tents early, and an estimated 10,000 people filed through in under four hours.

As she waited, Yoshiko Yokota recalled serving Abe at a restaurant.

She said she “felt paralysed” on the day of his shooting, July 8.

“For two, three days, I was just dazed,“ the 48-year-old said. “I don’t think Japan will ever have a better leader.”

Nearby was Tomoya Kagawa, a construction worker who took the day off to pay respects.

“I wanted to join this event to really see him off,“ the 37-year-old said. “I think he made a big contribution to Japan.”

'I didn't expect this'

Thirteen-year-old Mizuki Kyuno spent half an hour trying to find the end of a line that circled around dozens of city blocks, jumped across streets and continued down stairs into a subway station.

“I expected a lot of people. But I didn’t expect this,“ he said.

He acknowledged some discomfort with “the way the state funeral was organised”.

But he argued that “paying your respects to the deceased should be seen separately”.

Around 60 percent of Japanese people surveyed before the funeral said they opposed the event.

Some resent the nearly $12 million price tag, and others accuse Prime Minister Fumio Kishida of bypassing parliament when approving the event in a country where state funerals are rare.

Abe's murder by a man angry at the Unification Church also revealed links between his party and the religious group, which have caused simmering anger.

And Abe's tenure was divisive: his nationalist views and plans to reform the pacifist constitution were opposed by many, and he faced persistent cronyism allegations.

Those who gathered to protest the event pulled no punches.

“Stop fascist state funeral,“ read one sign held by a protester in a demonstration that had arrived near the Budokan by midday.

Outside the parliament, thousands of mostly older activists, many waving trade-union flags, used loudspeakers to denounce the event, Abe's record, and the government.

“I just found it unforgivable that such an enormous amount of taxpayer money is being spent,“ freelance filmmaker Kanako Harada told AFP.

“There is nothing he did that I can think highly of,“ the 39-year-old added.

“It’s important that we make it clear that there are at least people opposing this.”

Tokyo resident Chihei Karasawa, 33, also cited the scandal over the Unification Church and the cost of the event.

“A private funeral among family has already been held for him, so why mourn him as a nation too, when there is so much opposition to it and the price tag is so huge?” he told AFP.

“Taxpayer money should be used for the people instead.”