Nearly 100 women sworn in as judges in Egypt judicial body 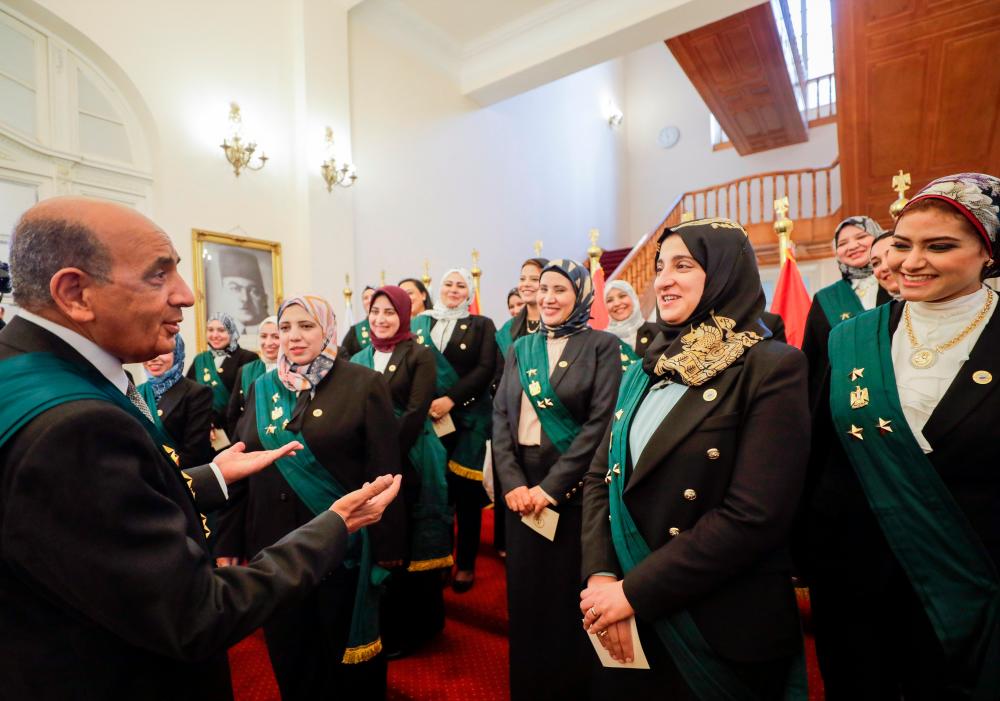 Mohamed Mahmoud Farag Hossam al-Din, Head of the Council of State, speaks with newly appointed female judges of the State Lawsuits Authority after the swearing-in ceremony at the State Council headquarters in Giza, Egypt October 19, 2021. REUTERSpix

CAIRO: Nearly 100 women have taken the constitutional oath on Tuesday and become the first female judges at Egypt’s State Council, one of the country’s main judicial bodies.

In line with the county’s plan to empower women in the judiciary sector, Egypt’s President Abdel-Fattah al-Sisi instructed in March the State Council and the Public Prosecution, the two judicial bodies once exclusive for male judges, to appoint females.

The first batch of female members at the council included 48 judges as assistant counsellors and 50 as vice-counsellors.

“The move is a dear gift for women in Egypt,“ said Taha Karsoua, vice president of the State Council.

Karsoua said the decision is an implementation of Sisi’s directives, adding that the new judges will have the same tasks as male judges in achieving justice and settling conflicts in all the council courts.

The State Council, established in 1946, is an independent judicial body that is exclusively competent to adjudicate in administrative disputes, disciplinary cases and appeals, and disputes pertaining to its decisions.

“I’m so proud to be appointed as a judge in the State Council. It is an honour to be part of the administrative judiciary,“ said Reem Moussa, one of the newly sworn-in judges.

Moussa said she had thought it was impossible for a woman to become a judge at the council because it was a group without female judges for 75 years.

“Today is a victory for Egyptian women, and an implementation of the constitution articles that stipulate equality between men and women in jobs,“ she told Xinhua, reiterating that it is an incentive for all females to achieve better in all jobs.

Egypt’s National Council for Women (NCW) applauded the appointment of female judges in the State Council as a move showing the political will of the county’s leadership to further empower women.

“The dreams of earlier generations of women had finally come true,“ said Maya Mursi, head of the NCW, adding that she was happy to witness such a historic moment that crowned the Egyptian women’s course. — Bernama