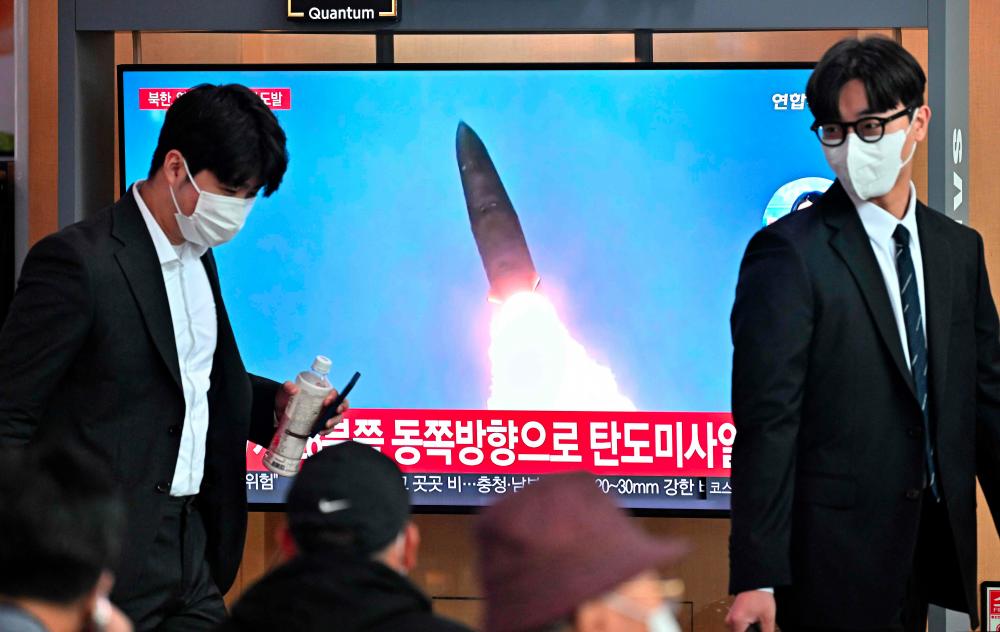 People walk past a television screen showing a news broadcast with file footage of a North Korean missile test, at a railway station in Seoul on October 4, 2022. - AFPPIX

SEOUL: North Korea has fired an unidentified ballistic missile, Seoul’s military said early Tuesday, part of a record-breaking streak of weapons tests by Pyongyang, as South Korea ramps up military drills with the US.

South Korea, Japan and the US staged anti-submarine drills Friday -- the first in five years -- just days after Washington and Seoul’s navies conducted large-scale exercises in waters off the peninsula.

Such drills infuriate North Korea, which sees them as rehearsals for an invasion.

US Vice President Kamala Harris was in Seoul last week and toured the heavily fortified Demilitarized Zone that divides the peninsula, on a trip that aimed to underscore her country’s “ironclad” commitment to South Korea’s defence against the North.

South Korean and US officials have also been warning for months that North Korean leader Kim Jong Un is preparing to conduct another nuclear test.

US and South Korean officials have said they believe this could happen soon after China’s upcoming party congress on October 16.

North Korea, which is under multiple UN sanctions for its weapons programmes, typically seeks to maximise the geopolitical impact of its tests with careful timing. - AFP