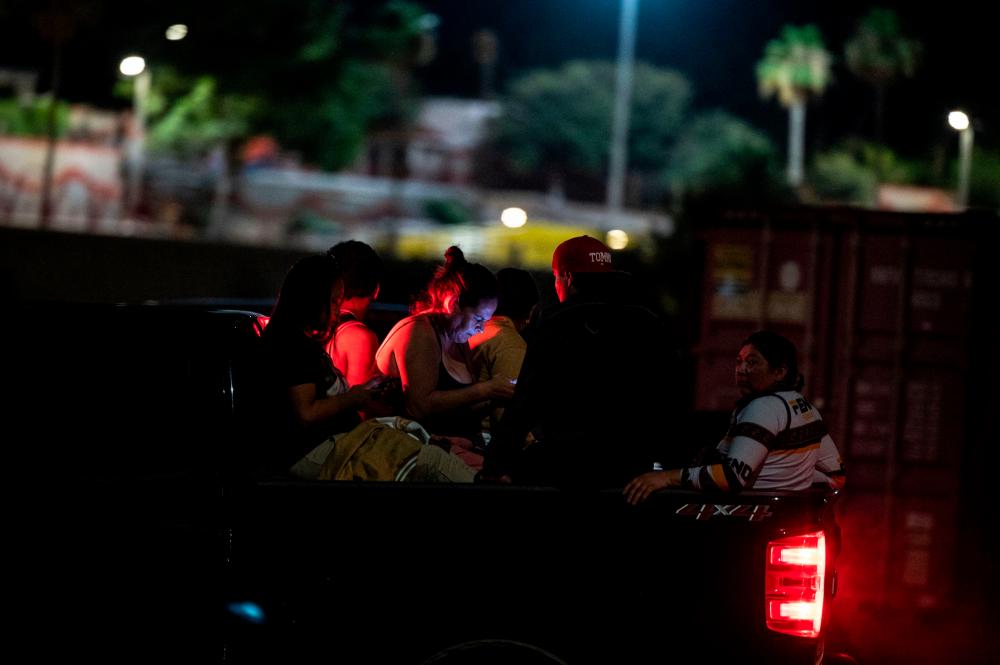 UNITED STATES: Selvin Allende is worn out. With his one-year-old daughter on his shoulders and his pregnant wife beside him, he crossed the Rio Grande from the Mexican city of Piedras Negras into Eagle Pass, Texas -- a dangerous journey that thousands of migrants undertake every year seeking a better future.

“I was afraid for my daughter in the river. I feel tired, defeated, but with the dream of working if the immigration services listen to us with their hearts,“ says the 30-year-old Guatemalan.

The family left their home in Honduras because of crime and a lack of work, and made the long trip by train and on foot to get here.

He and his wife, walking with a painful gait and eyes half-closed, make their way over to the border patrol waiting for them under one of the bridges that link Mexico and the United States. Their belongings fit in a pair of plastic bags.

The agents look over their passports and those of other people who recently arrived, and take them into custody to study their asylum claims.

The scene repeats itself several times a day under the resigned gaze of the security forces. “This never stops. They can cross wherever and whenever,“ said one National Guard soldier, who did not want to be named.

The reinforcement of security in the last few months has not stemmed the arrival of migrants without visas. In May, authorities detained more than 239,000 people on the Mexican border, a record, though the figure also includes those who tried to enter the US multiple times.

And yet, the journey comes with serious risks, as demonstrated by the case of 53 migrants found dead after being abandoned in a sweltering tractor trailer in San Antonio on Monday.

The man suspected of driving the truck has said he was unaware the trailer's air conditioning had failed, according to media reports.

On the Mexican bank of the river trucks come and go, letting off people crossing to the other side.

This afternoon the temperature hits 37 degrees Celsius (99 degrees Fahrenheit), and some migrants cool off in the water as they wait for more people to arrive with whom they can cross the treacherous river, which has claimed many lives.

One Venezuelan family - five men, two women and two children - decide the moment has come. Their crossing lasts 10 minutes, and halfway through, they grab onto each other to brace themselves against the strong currents.

When they arrive on the American side, they shout with happiness before turning themselves over to the border patrol.

The relief can be seen in every face. Alejandro Galindo, another Venezuelan crossing the river nearby, is emotional after 26 days of traveling with two companions.

“I’m crying with happiness. I want to help my family. In Venezuela we have no future,“ the 28-year-old says.

Eagle Pass, a city of 22,000 people about 230 kilometres (143 miles) from San Antonio, has learned to live with the daily presence of the migrants.

A few meters from the bridge over the border, several men play golf in the yellowish grass, paying no mind to the people crossing the river.

Valeria Wheeler, the director of the shelter Mission Border Hope, witnesses every day the challenges of the wave of migration.

In two years, her facilities have gone from taking in between 20 migrants a week to up to 600 a day.

The recent arrivals spend a few hours there, in a large warehouse with benches, bathrooms and showers, waiting for a relative to pay for their transportation to another city.

Before, they were usually people who could buy an airplane ticket to somewhere near the border. But now they are poorer, and arrive after walking from Mexico or Central America.

“They come with physical and emotional wounds,“ says Wheeler, whose shelter receives only those released by the border patrol and able to seek asylum after getting around Title 42.

The measure, invoked under the administration of former president Donald Trump, applies to all Mexicans and Central Americans, and allows for the deportation of migrants without visas, even if they are seeking asylum, under the pretext of stopping the spread of Covid-19.

For those who try to elude the border patrol and deportation, the journey is even more dangerous than for others.

So-called coyotes, or traffickers, are one option, but the price can climb as high as $10,000, and that's not the worst part, as seen in the case of the 53 people found dead in San Antonio.

“We’re here so the people who arrive at the shelter don’t have to go through the same thing,“ says Wheeler. “That’s what we’re working for.” - AFP