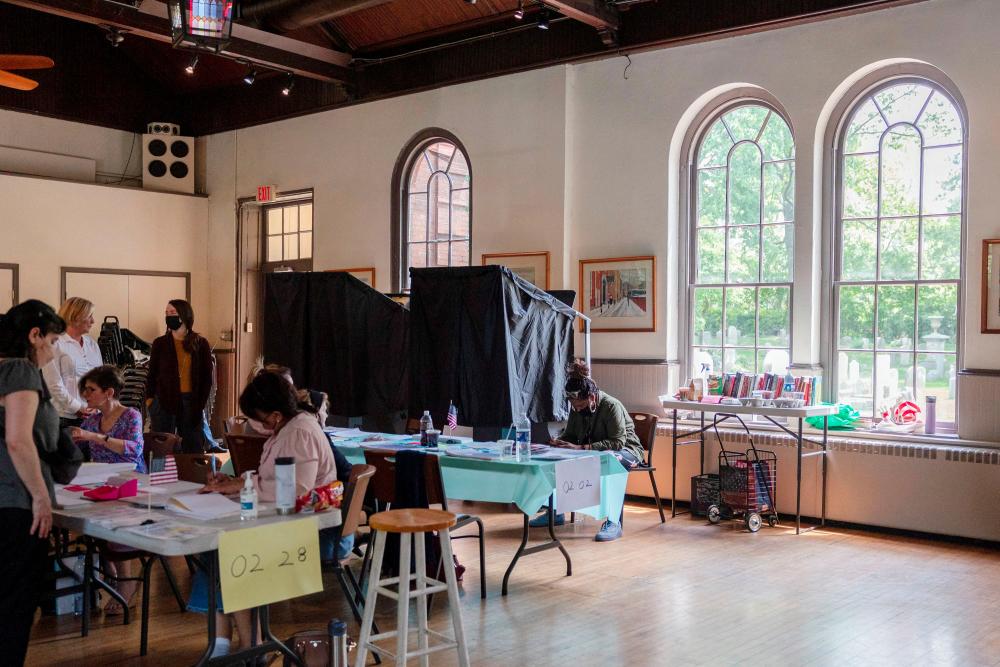 A poll worker signs in a voter for the Pennsylvania primary elections, at a polling place in the Gloria Dei Old Swedes Episcopal Church in Philadelphia, Pennsylvania, U.S., May 17, 2022. REUTERSpix

PHILADELPHIA: Polls closed on Tuesday evening in North Carolina, where voters were selecting nominees in a critical U.S. Senate race, while Pennsylvania residents were still casting ballots in Senate and gubernatorial races that present another test of former President Donald Trump’s sway with Republicans.

President Joe Biden’s fellow Democrats are fighting to retain their slim majorities in the House of Representatives and Senate in the Nov. 8 midterm elections. Democrats in both states are vying to win Senate seats being vacated by retiring Republicans.

A weekend opinion poll by the Trafalgar Group, a Republican firm, showed Oz leading Barnette 28.5% to 26.8%, within the margin of error, with McCormick trailing at 21.6%.

Barnette’s rise - along with that of state senator and gubernatorial candidate Doug Mastriano, a far-right candidate who has echoed Trump’s conspiracy theories - has worried some establishment Republicans that the duo could prove too extreme for voters in the general election.

In Pennsylvania’s Democratic Senate primary, progressive Lieutenant Governor John Fetterman has been comfortably ahead of centrist U.S. Representative Conor Lamb in polls. Fetterman has been hospitalized in Lancaster since suffering a stroke last week but said doctors expect a full recovery.

His campaign on Tuesday released a photo of him voting from his hospital bed via an emergency absentee ballot, shortly before his campaign said he successfully had a pacemaker installed to address irregular heart rhythms that caused the stroke.

Final results may not be known tonight. Pennsylvania officials said voters requested 908,000 absentee or mail-in ballots. State law prevents these from being processed until Election Day.

Trump ally Madison Cawthorn, a first-term Republican congressman who has frustrated his party’s leaders with a series of self-inflicted scandals, hopes to fend off a challenge in the House primary from state Senator Chuck Edwards.

More than 580,000 North Carolina voters had already cast their ballots in person or by mail, nearly twice as many as four years ago, according to the state Board of Elections. Those voters returned slightly more Democratic than Republican ballots.

Trump has endorsed more than 150 candidates as he tries to solidify his status as his party’s kingmaker, though his picks have not always prevailed. His support helped author J.D. Vance win the Ohio Senate primary, but his favored candidate lost in Nebraska’s gubernatorial race last week.

Republicans are well positioned to regain control of the House, which could enable them to frustrate Biden’s legislative agenda. Democrats have a better chance of keeping control of the Senate, currently split 50-50 between the parties with Vice President Kamala Harris holding the tie-breaking vote.

Barnette, seeking to become Pennsylvania’s first Black U.S. senator, has called her rivals insufficiently conservative. She was photographed marching toward the U.S. Capitol on Jan. 6, 2021, alongside members of the extremist Proud Boys group shortly before a mob of Trump supporters stormed the building in a failed bid to overturn his 2020 election loss.

Barnette’s campaign told NBC she did not take part in or condone the destruction of property and has no connection to the Proud Boys.

Trump last week endorsed Mastriano, who is leading the polls in Pennsylvania’s Republican gubernatorial primary and was also present outside the Capitol on the day of the riot. Mastriano played a significant role in the Trump campaign’s failed effort to overturn the state’s presidential results based on false claims of voting fraud.

Mastriano has said he would pursue a statewide abortion ban, after a leaked draft opinion showed the Supreme Court is poised to overturn Roe v. Wade, the 1973 decision legalizing abortion nationwide.

State Attorney General Josh Shapiro, who has no rivals for the Democratic nomination, has vowed to protect abortion rights. Shapiro said on Tuesday that he was isolating at home after testing positive for Covid-19.