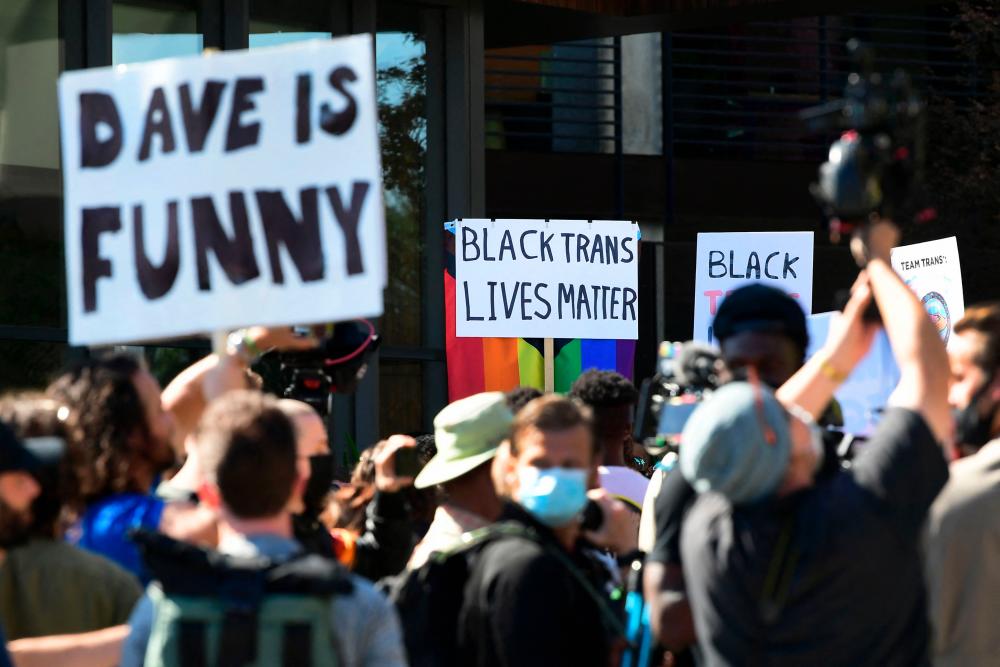 People rally in support of the Netflix transgender walkout and others in support of comedy and free speech, on October 20, 2021 in Los Angeles, California. AFPpix

LOS ANGELES: Protestors gathered outside Netflix in Los Angeles on Wednesday, angry over a new Dave Chappelle comedy special that has sparked accusations the streamer is trampling transgender rights and profiting from hate speech.

A few dozen staff walked off the job and were joined by a similar number of trans activists and their supporters for a demonstration calling for better representation at the Hollywood giant.

"I think that trans and non-binary employees aren't safe as long as their employer is putting out content in the world that could harm them," said Netflix Animation employee Devan McGrath, participating in the walkout.

Netflix has scrambled to respond to the unusually public controversy it is facing over Chappelle's "The Closer," in which the stand-up star insists "gender is a fact" and accuses LGBTQ people of being "too sensitive."

The company issued a statement before the protest Wednesday saying: "We understand the deep hurt that's been caused" and "respect the decision of any employee who chooses to walk out."

Rally organizer Ashlee Marie Preston, an LGBTQ activist, said the rally was intended to more broadly highlight that jokes such as those made by Chappelle were directly harmful to the minority community.

"We are here today not because we don't know how to take a joke. We're here because we're concerned that the jokes are taking lives. It's not a laughing matter," she said.

Companies including Netflix "capitalize off of tension" and use "algorithmic science to manipulate and distort our perceptions of ourselves and one another," said Preston.

Demonstrators on Wednesday read out a "list of asks," including for a content warning to be added to "The Closer," and higher investment in LGBTQ talent both on screen and within the company.

The row over "The Closer" has been going on for two weeks, as Chappelle's comedy special has ridden high in Netflix's list of most-watched titles.

But the co-CEO gave interviews to multiple Hollywood trade publications Tuesday in which he admitted: "I screwed up."

"I should have first and foremost acknowledged in those emails that a group of our employees were in pain, and they were really feeling hurt from a business decision that we made," he told The Hollywood Reporter.

While agreeing that "content on screen can have impact in the real world, positive and negative," Sarandos reiterated his belief that the Chappelle stand-up should not be taken down or have any disclaimer added.

"This group of employees felt a little betrayed because we've created such a great place to work that they forgot that sometimes these challenges will come up," said Sarandos.

The majority of Netflix staff at the protest Wednesday did not speak to journalists, although McGrath said the leadership's response had been "frustratingly slow."

The walkout and rally have drawn support from film and television celebrities such as Jameela Jamil ("The Good Place") and Jonathan Van Ness ("Queer Eye"), who recorded a video message expressing "love and support" for the movement.

David Huggard -- known to "Ru Paul's Drag Race" fans as Eureka O'Hara -- attended the rally to highlight "the pain and the hurt that comes with living in this world as a non-binary individual."

"And that goes for anyone in this country, specifically people of power in the entertainment industry," they added.

Chappelle has been accused of mocking transgender people in the past, but remains hugely popular among his fans.

A small counter-protest gathered on Wednesday in support of Chappelle, with some carrying signs saying "Jokes Are Funny."

1.Does Omicron pose higher risks for infants than other variants?

2.Taliban, Myanmar junta unlikely to be let into U.N. for now