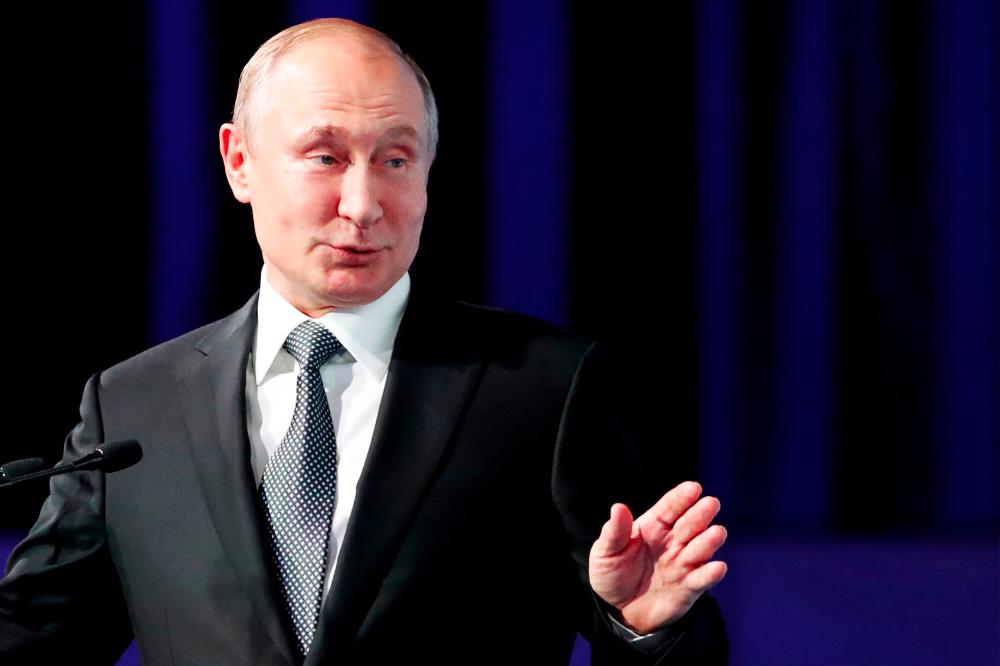 ROME: Russian President Vladimir Putin arrives in Rome Thursday for a lightning visit including talks with the pope and Italy’s populist government, which has called for an easing of sanctions despite Moscow’s ongoing crisis with the West.

Rome’s historic centre is on security lockdown for the visit with 50 streets blocked to traffic and Italian media reporting that mobile phone signals could be scrambled.

Putin will be driven around in his six-metre-long armoured limo by a chauffeur who has been practising negotiating his way around the Eternal City’s narrow streets, but his talks with Italian leaders should be easier.

“Men like him (Putin) who act in the interest of their own citizens, there should be dozens in this country”, Salvini said last year, shortly after being elected.

Kremlin advisor Yuri Ushakov told journalists in Moscow ahead of the visit that “Italy is one of our main partners in Europe”.

“Economic questions are a priority. Bilateral trade has not returned to pre-2014 levels (of 54 billion dollars (RM 223.2 billion)),“ Ushakov said.

“We will promote a revision of the sanctions system” imposed by the EU after Russia annexed Crimea in 2014,“ Italian Prime Minister Giuseppe Conte said when laying out his government programme last year.

The EU imposed further sanctions on Moscow over its involvement in the secessionist conflict in eastern Ukraine, including the downing of Malaysian Airlines flight MH17.

An EU summit last month extended economic sanctions targeting whole sectors of the Russian economy, including its valuable oil and gas industry, until the end of 2019.

The measures prohibit certain exports and imports from Crimea, and ban EU-based companies from investment and tourism services in the strategic Black Sea peninsula.

Before talks with Conte and President Sergio Mattarella, Putin will have his third meeting with Pope Francis.

Their last encounter was in 2015 when the pope urged all parties to the conflict in Ukraine to make a “sincere effort” for peace.

The meeting lasted an unusual 50 minutes. Only audiences with former US President Barack Obama and French President Emmanuel Macron have been longer.

Francis first met Putin in 2013, as the Roman Catholic Church sought to improve ties with the Russian Orthodox Church.

Only in 2009 did the Vatican and Moscow re-establish full diplomatic ties which had been severed during Soviet times.

Relations have improved since the coming to power in the same year of Patriarch Kirill, who headed up the Russian Orthodox Church’s diplomatic arm for years.

The Russian Orthodox Church has frequently accused the Catholic Church of proselytising in Russia, an Orthodox Christian country of 144 million.

The pope in 2016 held a historic meeting with Kirill in Cuba, the first encounter between the heads of the two largest Christian churches since Christianity split into Western and Eastern branches in the 11th Century — an event known as “The Great Schism.”

Kremlin advisor Ushakov said on Wednesday that “for the time being a possible invitation for the pope to visit Russia is not on the agenda.”

The pope and Putin will discuss “preserving Christian holy sites in Syria”, the Kremlin said.

Salvini and fellow deputy prime minister Luigi Di Maio will attend a dinner for Putin in the evening, after which Putin will meet his old friend, tycoon and former premier Silvio Berlusconi. — AFP