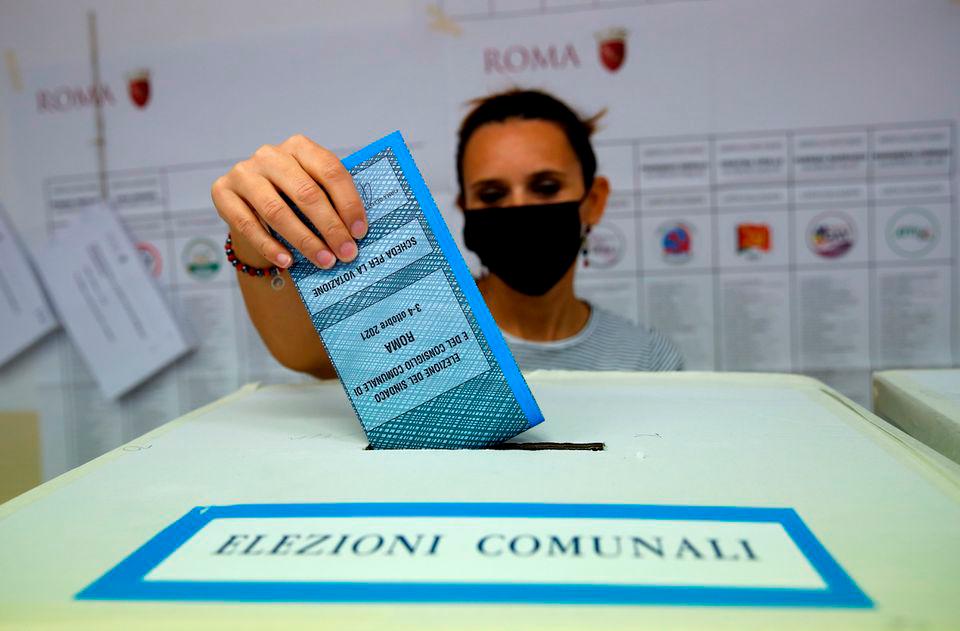 A person casts a vote during Italian elections for mayors and councillors, in Rome, Italy. REUTERSPix

ROME: Romans began casting ballots on Sunday in a runoff mayoral election, with a close race expected in an Eternal City plagued by garbage, transport and wild boar troubles.

The two-day vote was being held in the capital a day after a large anti-fascist demonstration and amid allegations of anti-Semitic and pro-fascist behaviour from the centre-right's candidate.

The centre-left's Roberto Gualtieri, a former economy minister, was favourite to beat right-wing Enrico Michetti, a lawyer and radio host, according to polls.

Michetti, 55, was last week hit by accusations of anti-Semitism over an article he wrote last year that was unearthed by a left-wing newspaper.

In it, he said the Holocaust was commemorated more than other massacres because the Jews “control banks and a lobby capable of deciding the fate of the planet”.

Michetti had also suggested earlier this year that the stiff-armed Roman salute -- commonly used by fascists -- should be used during the coronavirus pandemic because it was more hygienic.

Salvini slammed the anti-fascism rally, which was attended by tens of thousands of people according to organisers, as an electoral ploy by the left.

In the first round, Michetti won 30 percent of the votes, versus the 27 percent pocketed by Gualtieri, 55.

But history professor Gualtieri is expected to pick up many of the votes of independent centrist Carlo Calenda and outgoing mayor Virginia Raggi, both of whom were defeated in the first round this month.

The campaign has been dominated by complaints about Rome's decline, with creaking public transport, and a rubbish crisis so serious it has become an attraction for wild boars.

“Rome cannot resign itself to talking about just rubbish and potholes. Rome is a great European capital,“ Gualtieri said at his closing electoral rally on Friday.

Michetti, who often refers to the glory of ancient Rome, closed his race in a central piazza nearby by saying that there was “a lot of affection in this city, a lot of desire to be reborn, to rise again”.

Aside from Rome, more than 60 towns and cities are holding mayoral elections, with voters casting their ballots on Sunday and Monday.