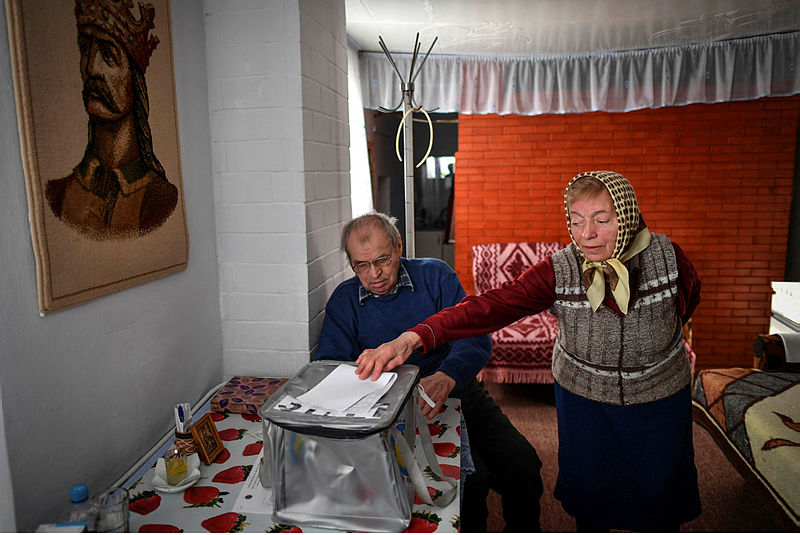 An elderly woman casts her ballot in a mobile ballot box in Bardar village, on Feb 24, 2019, as Moldovans are called to the polls to elect new parliament members. — AFP

CHISINAU: Moldova held a parliamentary poll on Sunday, with both pro-Russian and pro-EU forces accusing the ruling party of massive election fraud.

They said the Democratic Party, led by powerful oligarch Vlad Plahotniuc, had bussed in people from the former Soviet state’s breakaway region of Transnistria and told them how to vote.

Dodon urged people not to be tempted by bribes.

“Don’t be afraid or let people buy you off. Don’t be afraid of losing your job,“ Dodon said after voting in the capital Chisinau. “I know people are encouraging you to vote for certain parties.”

Nastase alleged that “they (the ruling party) are bussing in vulnerable people ripe for corruption”.

But Democratic Party deputy chairman Vladimir Chebotar said he had information that it was Socialist Party leaders who were offering bribes to residents of Transnistria to back its candidates.

Authorities in Transnistria – which broke away from Moldova after the fall of the USSR but is not recognised internationally – did not allow polling stations to be opened in the region.

But around 220,000 people living in the narrow stretch of land hold Moldovan citizenship and are eligible to vote on the other side of the Dniester River that separates the rebel republic from government-controlled territory.

“These elections were neither free, nor fair, nor democratic,“ said Maia Sandu, one of the leaders of the pro-European ACUM bloc. “These were the least democratic elections in the history of Moldova.”

Chebotar on Sunday acknowledged “violations” during the election but shrugged them off, saying they would “not affect the voting process”.

Polling stations closed at 9pm local time (3am Malaysia), with voter participation at a little over 49%, according to electoral authorities. Results are expected on Monday.

No party is likely to gain the majority needed to form a government in the country of 3.5 million people, and analysts are concerned the vote will be followed by a period of instability.

While many want to maintain close ties with Moscow, others are looking towards the European Union, seeking to follow the example of Romania, with which Moldova shares a language and a long history.

Victoria Chetrean, 40, told AFP she voted for the pro-European alliance that favours joining the EU and Nato.

“My husband has worked in Italy for over 10 years for us to have a bare minimum standard of living,“ she said. “We should work towards European living standards.”

Moldova’s economy is propped up by remittances from workers abroad, and the working-age population has shrunk.

“People are disillusioned with the state, a million people have left,“ said Ion Vasilache, a 42-year-old university lecturer who supports Moldova joining the EU.

“If the same corrupt authorities stay in power after the election, I will leave for Romania,“ he said.

Russia has rallied around Dodon, a close ally of President Vladimir Putin.

He voted for the Socialists, describing theirs as “the only party that looks after national minorities”.

As well as seeking to keep Moldova in its sphere of influence, Moscow has long backed separatists in Russian-speaking Transnistria.

Fuelling tensions ahead of the vote, Russian authorities on Friday accused ruling party leader Plahotniuc of running a vast money-laundering scheme in 2013-14.

But on Sunday, parliamentary speaker Andrian Candu said it was merely a Russian ploy to influence the election.

“It is all manipulation and disinformation,“ he said after voting in Chisinau.

“It’s not the first time that Russia tries to influence Moldova’s election.”

The Democratic Party has sought a balanced approach between Moscow and the EU.

But relations with the EU have deteriorated. Last November, Brussels reduced aid citing a “deterioration of the rule of law” – a reference mainly to corruption.

A businessman convicted in a billion-dollar fraud case – Israeli-born Ilan Shor – is likely to make it to parliament, a case analysts say exposes widespread graft. — AFP