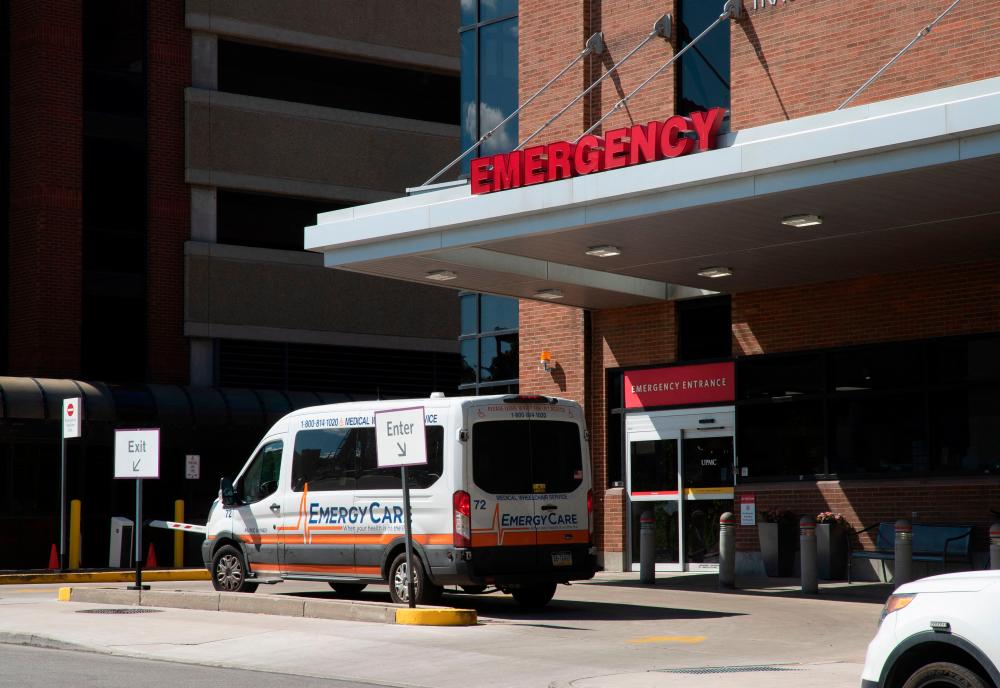 A general view shows UPMC Hamot Surgery Center in Erie, Pennsylvania, on August 13, 2022, where Indian-born British-American novelist Salman Rushdie is being treated. Salman Rushdie, who spent years in hiding after an Iranian fatwa ordered his killing, was on a ventilator and could lose an eye following a stabbing attack at a literary event in New York state on August 12, 2022. AFPPIX

ERIE: Salman Rushdie remained hospitalized in serious condition Saturday after being stabbed at a literary event in New York state in a shocking assault that triggered widespread international outrage, but drew applause from hardliners in Iran and Pakistan.

The British author, who spent years under police protection after Iranian leaders ordered his killing, underwent emergency surgery and was placed on a ventilator following Friday's assault in which a 24-year-old man, Hadi Matar, rushed the stage where Rushdie was about to deliver a lecture and stabbed him in the neck and abdomen.

Matar, from New Jersey, was taken into custody and formally charged with attempted murder, but police provided no information on his background or what might have motivated him.

According to Rushdie’s agent Andrew Wylie, the nerves in one of the novelist’s arms were severed, his liver damaged, and he “will likely lose one eye.”

Rushdie, 75, had been living under an effective death sentence since 1989 when Iran's then supreme leader Ayatollah Ruhollah Khomeini issued a religious decree, or fatwa, ordering Muslims to kill the writer.

The fatwa followed publication of the novel “The Satanic Verses” which sparked fury among some Muslims who believed it was blasphemous.

Assailant raised in US

Rushdie moved to New York in the early 2000s and became a US citizen in 2016. Despite the continued threat to his life, he was increasingly seen in public -- often without noticeable security.

In an interview with Germany's Stern magazine just weeks before the attack, Rushdie spoke of how, after so many years living with the threat of the fatwa, his life had largely returned to normal since moving to the United States.

Security was not particularly tight at Friday's event at the Chautauqua Institution, which hosts arts programs in a tranquil lakeside community in western New York state.

Witnesses said Rushdie was seated on an auditorium stage and preparing to speak when Matar jumped up from the audience and managed to stab him several times before being wrestled to the ground by staff and other spectators.

Matar's family apparently came from a border village called Yaroun in southern Lebanon. An AFP reporter who visited the village Saturday was told that Matar's parents were divorced and his father -- a shepherd -- still lived there. Journalists who approached his father's home were turned away.

Matar was “born and raised in the US,“ the head of the local municipality, Ali Qassem Tahfa, told AFP.

“The Satanic Verses” and its author remain deeply inflammatory in Iran and, when asked by AFP on Saturday, nobody in Tehran’s main book market dared to openly condemn the stabbing.

“I was very happy to hear the news,“ said Mehrab Bigdeli, a man in his 50s studying to become a Muslim cleric.

The message was similar in Iran’s conservative media, with one state-owned paper saying the “neck of the devil” had been “cut by a razor.”

In Pakistan, a spokesman for the Tehreek-e-Labbaik Pakistan -- a party that has staged violent protests against what it deems to be anti-Muslim blasphemy -- said Rushdie “deserved to be killed.”

Elsewhere there was widespread shock and outrage, along with expressions of support and solidarity for the writer.

Messages also flooded in from the literary world, with J.K. Rowling tweeting her shock at the “horrifying” assault and Rushdie’s close friend and fellow Booker Prize winner Ian McEwan calling him an “inspirational defender of persecuted writers and journalists across the world.”

Rushdie was propelled into the spotlight with his second novel, “Midnight’s Children”, in 1981, which won international praise and Britain’s prestigious Booker Prize for its portrayal of post-independence India.

But his 1988 book “The Satanic Verses” transformed his life when the resulting fatwa forced him into nearly a decade in hiding, moving houses repeatedly and being unable to tell even his children where he lived.

Even as the need for constant security began to diminish in the late 1990s, threats and boycotts continued against literary events that Rushdie attended.

Since moving to New York Rushdie has been an outspoken advocate of freedom of speech and continued writing -- including a memoir “Joseph Anton,“ named after his alias while in hiding.