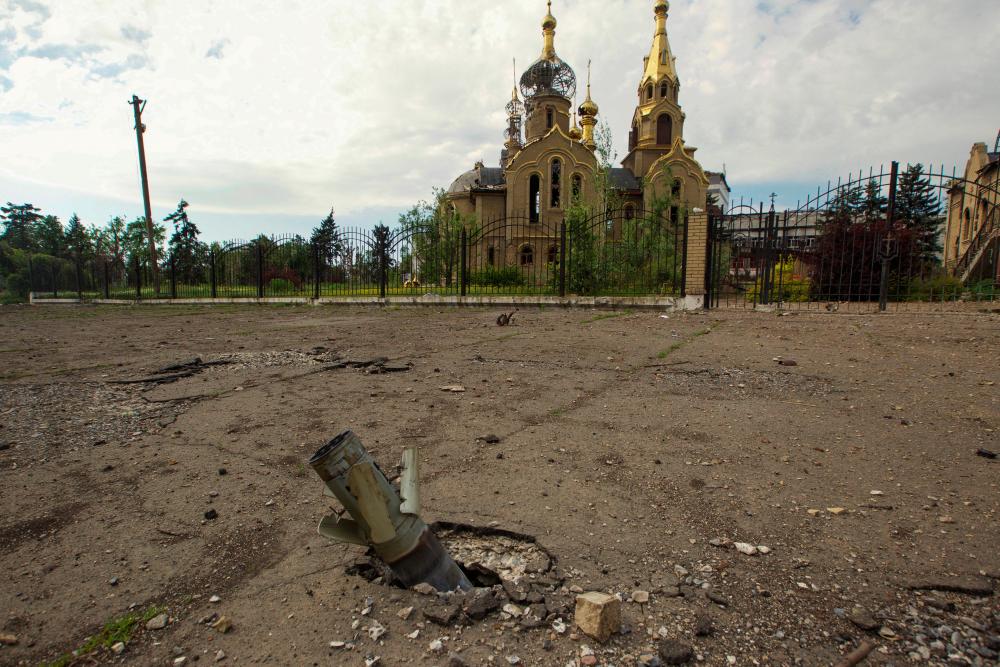 A shell of a multiple rocket launch system is seen in the town of Marinka, as Russia's attack on Ukraine continues, in Donetsk region, Ukraine May 28, 2022. REUTERSpix

KYIV: Russian forces stepped up their assault on the Ukrainian city of Sievierodonetsk on Saturday after claiming to have captured the nearby rail hub of Lyman, as Kyiv intensified its calls for longer-range weaponry from the West to help it fight back in the Donbas region.

Slow, solid Russian gains in recent days point to a subtle momentum shift in the war, now in its fourth month. The invading forces appear close to seizing all of the Luhansk region of Donbas, one of the more modest war goals the Kremlin set after abandoning its assault on Kyiv in the face of Ukrainian resistance.

Russia’s defence ministry said on Saturday its troops and allied separatist forces were now in full control of Lyman, the site of a railway junction west of the Siverskyi Donets River in the Donetsk region that neighbours Luhansk.

Sievierodonetsk, some 60 km (40 miles) from Lyman on the eastern side of the river and the largest Donbas city still held by Ukraine, was under heavy assault from the Russians.

Russian artillery was also shelling the Lysychansk-Bakhmut road, which Russia must take to close a pincer movement and encircle Ukrainian forces.

“There was significant destruction in Lysychansk,“ the police said.

The governor of Luhansk, which along with Donetsk comprises the Donbas, said on Friday Russian troops had already entered Sievierodonetsk. Ukrainian troops may have to retreat from the city to avoid capture, Governor Serhiy Gaidai said. It was not clear whether they had begun to pull out on Saturday.

Ukrainian presidential adviser and peace talks negotiator Mykhailo Podolyak on Saturday repeated a call for deliveries of U.S.-made long-range multiple-rocket launchers. U.S. officials tell Reuters such systems are actively being considered, with a decision possible in the coming days.

“It is hard to fight when you are attacked from 70 km away and have nothing to fight back with. Ukraine can return Russia behind the Iron Curtain, but we need effective weapons for that,“ Podolyak tweeted.

President Volodymyr Zelenskiy voiced hopes in a late-night video address that allies would provide needed weaponry and added that he expected “good news on this next week.”

The Ukrainian military said on Saturday its troops had repelled eight assaults in Donetsk and Luhansk in the previous 24 hours.

The British defence ministry said in its daily intelligence report that if Russia succeeded in taking over those areas, the Kremlin would likely view it as a “substantive political achievement,“ one it could use to justify its invasion to the Russian people.

Some 90% of buildings in Sievierodonetsk were damaged, Governor Gaidai said, with 14 high-rise buildings destroyed in the latest shelling. Several dozen medical staff were staying on in Sievierodonetsk but they faced difficulty just getting to hospitals because of the shelling, he said.

Reuters could not independently verify the information.

Analysts at the Washington-based Institute for the Study of War said that while Russian forces had begun direct assaults on built-up areas of Sievierodonetsk, they were likely to struggle to take ground in the city itself.

“Russian forces have performed poorly in operations in built-up urban terrain throughout the war,“ they said.

Zelenskiy said the military situation in the Donbas region was very complicated, adding that defences were holding up in a number of places, including Sievierodonetsk and Lysychansk.

“It’s indescribably difficult there. And I am grateful to all those who withstood this onslaught,“ he said in his late-night video address.

In a television interview, Zelenskiy said he believed Russia would agree to talks if Ukraine can recapture all the territory it has lost since the invasion began on Feb. 24.

Still, Zelenskiy ruled out the idea of using force to win back all the land Ukraine has lost to Russia since 2014, which also includes Crimea, which Moscow annexed that year.

“I do not believe that we can restore all of our territory by military means. If we decide to go that way, we will lose hundreds of thousands of people,“ he said.

Russia says it is waging a “special military operation” to demilitarise Ukraine and rid it of nationalists threatening Russian-speakers there. Kyiv and Western countries say Russia’s claims are a false pretext for war.

Thousands of people, including many civilians, have been killed and several million have fled their homes, either for safer parts of Ukraine or to other countries.

Ukraine’s General Staff said on Saturday that multiple Russian strikes had hit communities and infrastructure near Kharkiv, the country’s second largest city. A solar power station in the region was badly damaged after an apparent missile strike, a Reuters photographer said.

Pushing diplomatic efforts to find a solution to a conflict that has myriad ramifications beyond Ukraine’s borders, French President Emmanuel Macron and German Chancellor Olaf Scholz spoke to Russian President Vladimir Putin in a joint phone call on Saturday.

They urged him to lift the Russian blockade of the port of Odesa to allow Ukrainian grain exports, France said. The Kremlin said Putin told them Moscow was willing to discuss ways to make it possible for Ukraine to resume shipments of grain from Black Sea ports.

Ukraine is a major grain exporter and the blockage of its exports threatens to result in food shortages in a number countries, including in Africa.

Meanwhile the supply of weapons to Kyiv from its allies continued. Ukrainian Defence Minister Oleksiy Reznikov said it had started receiving Harpoon anti-ship missiles from Denmark.

“We have to talk clearly about the catastrophic consequences for the future of all Europe if Ukraine is defeated,“ she said in a Facebook post. — Reuters Muslims in Malaysia to celebrate Aidiladha on Sunday, July 10 Remains of Covid-19 patients can be bathed, shrouded: Khairy Muslims in Malaysia to celebrate Aidiladha on Sunday, July 10

Remains of Covid-19 patients can be bathed, shrouded: Khairy

RM360k payment to TS Consultancy not for helping Umno in voter registration: Zahid

NATO deal with Turkey greeted with caution and concern in Sweden

3.Muslims in Malaysia to celebrate Aidiladha on Sunday, July 10

4.Remains of Covid-19 patients can be bathed, shrouded: Khairy

5.Judge Nazlan’s previous bank job has nothing to do with Najib’s SRC case: DPP