Russia’s Ukraine invasion is backdrop to election in Latvia 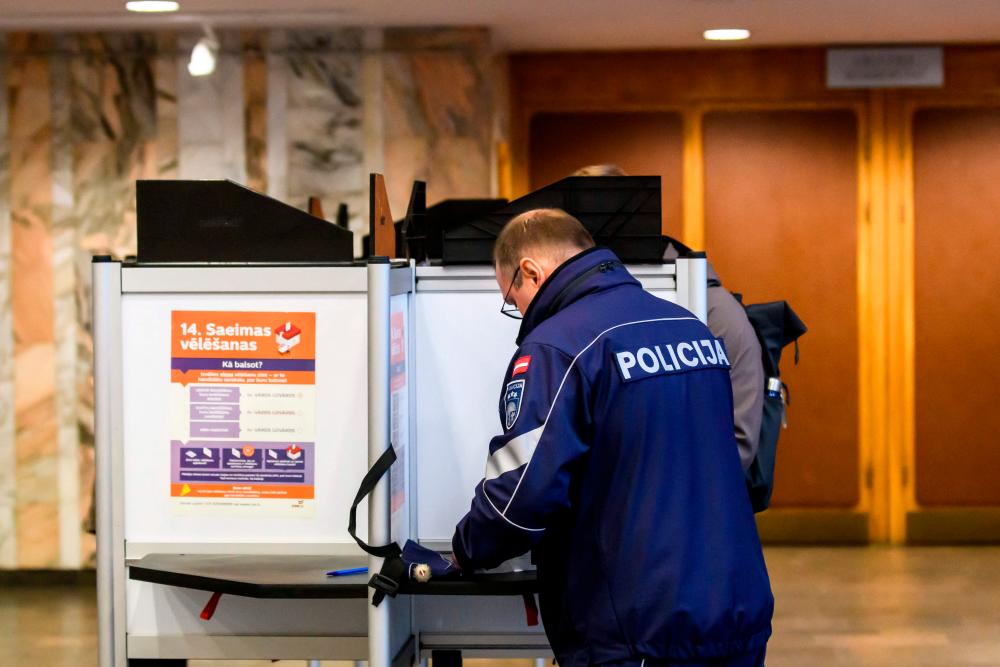 A man votes at a polling station during the general election on October 1, 2022 in Riga, Latvia. Latvians head to the polls on October 1, 2022 in the shadow of neighbouring Russia’s invasion of Ukraine, with victory expected for centrist parties that have vowed to continue backing Kyiv and beefing up national security. AFPPIX

VILNIUS: Latvians were voting on Saturday in a parliamentary election, with opinion polls predicting that Prime Minister Krisjanis Karins's centre-right New Unity party will win the most votes, enabling him to continue his coalition with the conservative National Alliance.

A victory for Karins could widen a growing rift between the Latvian majority and Latvia's Russian-speaking minority over their place in society following Russia's invasion of Ukraine.

“I’m ready to continue being the prime minister, if that’s what the people say,“ Karins told reporters in Riga on Saturday.

The first Latvian head of government to survive a full four-year term, surveys show Karins benefitting from driving the country's hawkish stance against Russia amid widespread national anger over the invasion of Ukraine.

The election campaign was dominated by questions of national identity and security concerns, while urgent issues including soaring energy costs and high inflation were largely pushed aside.

Karins told Reuters on Tuesday he believes the war in Ukraine has consolidated his NATO and European Union nation of 1.9 million. He said that if re-elected, he would integrate the Russian minority - a quarter of population - by having the country educate its children in the Latvian language.

“We’re putting all of our focus on the youth, to make sure that regardless of what language is spoken at home, that the child grows up with all of the advantages of knowing our language, knowing our culture”, he said.

Before Moscow invaded Ukraine on Feb. 24, tens of thousands of Russian speakers in Latvia used to gather every May 9 around a monument in Riga to commemorate the Soviet victory against Nazi Germany in World War Two.

Their gatherings were banned after the invasion and the 84-metre (275-foot) structure in the centre of the capital was demolished on orders from the government - which is dominated by ethnic Latvians and would prefer to bury the memories of the country being part of the former Soviet Union up to 1991.

Popular TV broadcasts from Russia have been banned and the state language board has proposed renaming a central Riga street commemorating Russian poet Alexander Pushkin. Karins' government has put forward plans to switch all education to Latvian and to swiftly phase out instruction in Russian.

The social democrat Harmony party, traditionally backed by Latvia's Russian-speaking minority, received 19.8% of votes in the 2018 elections and became the largest opposition party in parliament. However, the latest opinion polls showed 7.3% support for Harmony. - Reuters