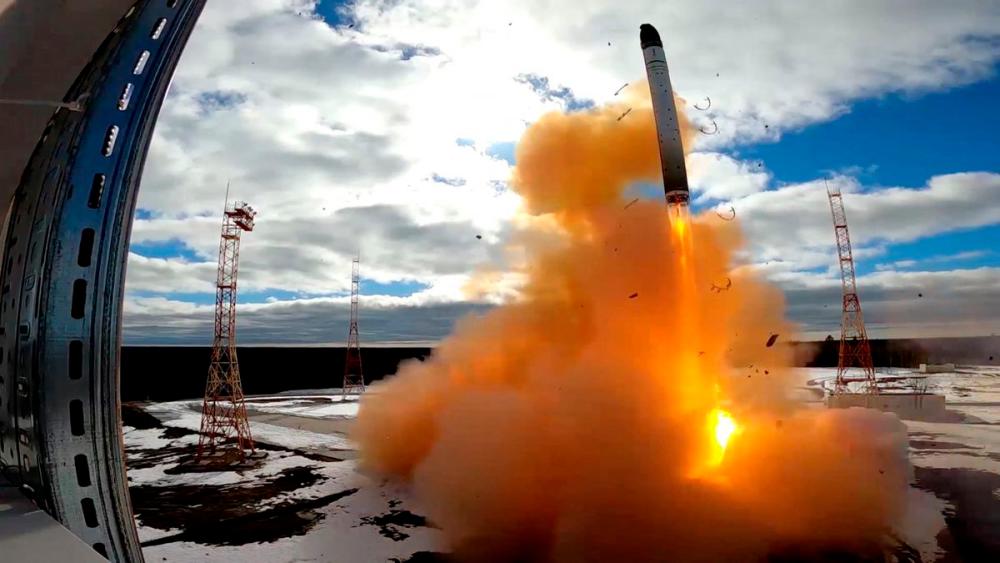 A Sarmat intercontinental ballistic missile is test-launched by the Russian military at the Plesetsk cosmodrome in Arkhangelsk region, Russia, in this still image taken from a video released on April 20, 2022. REUTERSPIX

The target stated by Dmitry Rogozin, head of the Roscosmos space agency, is an ambitious one as Russia reported its first test-launch only on Wednesday and Western military experts say more will be needed before the missile can be deployed.

The Sarmat is capable of carrying 10 or more nuclear warheads and decoys, and of striking targets thousands of miles away in the United States or Europe.

This week's test, after years of delays due to funding and technical issues, marks a show of strength by Russia at a time when the war in Ukraine has sent tensions with the United States and its allies soaring to their highest levels since the 1962 Cuban missile crisis.

Rogozin said in an interview with Russian state TV that the missiles would be deployed with a unit in the Krasnoyarsk region of Siberia, about 3,000 km (1,860 miles) east of Moscow.

He said they would be placed at the same sites and in the same silos as the Soviet-era Voyevoda missiles they are replacing, something that would save “colossal resources and time”.

The launch of the “super-weapon” was an historic event that would guarantee the security of Russia's children and grandchildren for the next 30-40 years, Rogozin added.

Western concern at the risk of nuclear war has increased since Russian President Vladimir Putin launched his invasion of Ukraine on Feb. 24 with a speech in which he pointedly referred to Moscow's nuclear forces and warned that any attempt to get in Russia's way “will lead you to such consequences that you have never encountered in your history.”

“The prospect of nuclear conflict, once unthinkable, is now back within the realm of possibility,“ United Nations Secretary-General Antonio Guterres said last month. - Reuters