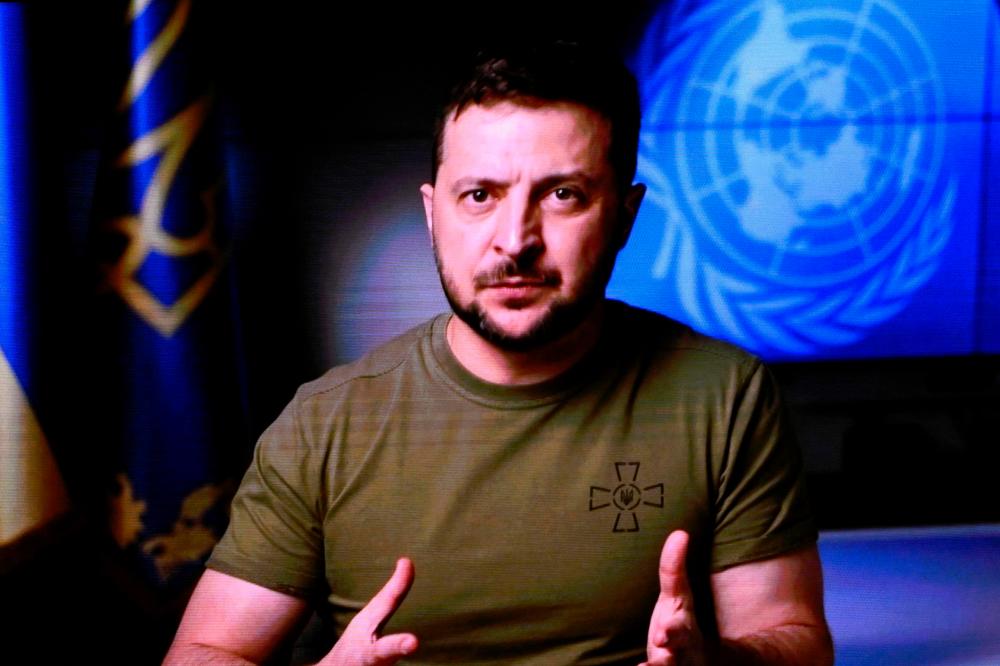 Ukrainian President Volodymyr Zelensky is seen on a screen as he remotely addresses the 77th session of the United Nations General Assembly at the UN headquarters in New York City on September 21, 2022. AFPPIX

UNITED STATES: Russia is set to face direct pressure Thursday at the United Nations over its invasion of Ukraine, whose leader Volodymyr Zelensky appealed to the world to punish Moscow.

As global leaders convened for the annual General Assembly, the Security Council will hold a special session among foreign ministers called by France on impunity for rights abuses in Ukraine.

The morning session is expected to bring Russian Foreign Minister Sergei Lavrov face to face with top Western diplomats including Secretary of State Antony Blinken, who has refused a one-on-one meeting since the February 24 invasion.

After two years of pandemic restrictions, only one leader was still allowed to address the General Assembly virtually -- Zelensky, who in a pre-recorded video called 15 times for “punishment” of Russia and received a rare standing ovation.

Zelensky called for a special tribunal to hold Russia accountable, saying it would be a “signal to all would-be aggressors.”

He also demanded a compensation fund, saying Russia “should pay for this war with its own assets.”

His address came hours after Russian President Vladimir Putin mobilized reservists and made a veiled threat to use nuclear weapons, signs that he is in no rush to end the war.

Zelensky made clear he saw no point to immediate talks, saying Russia only used diplomacy to buy time on the battlefield.

“Russia is afraid of real negotiations and does not want to fulfill any fair international obligations. It lies to everyone -- as is typical for aggressors, for terrorists.”

British Prime Minister Liz Truss, addressing the United Nations on her first foreign trip, vowed that her government “will not rest until Ukraine prevails.”

“At this crucial moment in the conflict, I pledge that we will sustain or increase our military support to Ukraine for as long as it takes,“ she said.

As Western nations including top EU economy Germany try to wean themselves off dependence on Russian energy, Truss called as well for an “economic NATO” among the Group of Seven powers and their partners.

“If the economy of a partner is being targeted by an aggressive regime, we should act to support them -- all for one, and one for all,“ she said.

Zelensky has become a symbol of resistance in the West, which has responded with wide sanctions on Russia and billions of dollars in military equipment for Ukraine.

But the former actor appeared conscious of the resentment in the developing world about the focus on Ukraine. He pointed to the lack of African and Latin American representation on the Security Council as he called for Russia to be stripped of its veto power.

US President Joe Biden also sought to woo the developing world, announcing another $2.9 billion to address global food insecurity -- which has worsened markedly since the invasion of Ukraine, a major grain exporter.

And he threw his support behind Security Council seats for Africa and Latin America.

“Let us speak plainly. A permanent member of the United Nations Security Council invaded its neighbor -- attempted to erase the sovereign state from the map.”

The United States has previously offered verbal support but little enthusiasm for years of calls to reform the Security Council. It has earlier backed bids by Japan and India.

Biden also promised the United States would “refrain from the use of the veto, except in rare, extraordinary situations, to ensure the council remains credible and effective.”

Russia in recent years has been the most frequent user of its veto power. The United States, China, France and Britain also enjoy vetoes, a legacy of the power dynamics at the end of World War II.

Russia has previously scoffed at US high-mindedness on the Security Council, pointing to how former president George W. Bush circumvented it to invade Iraq.

No 'Cold War' with China

Amid warnings of rising global division, Biden also sought to calm tensions with China, days after he again promised US support to Taiwan if Beijing invades the self-governing democracy.

“As we manage shifting geopolitical trends, the United States will conduct itself as a reasonable leader. We do not seek conflict, we do not seek a Cold War,“ Biden said.

The Biden administration has been encouraged by what it sees as China's less than full backing of Putin, who recently acknowledged that Beijing has concerns about the Ukraine war. - AFP