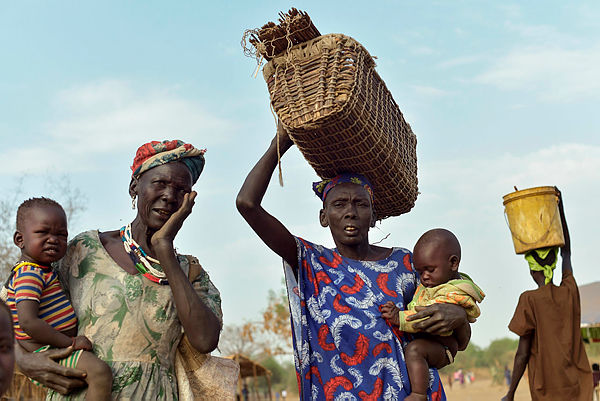 UDIER, South Sudan: Chol Deng, her husband and five children sit, exhausted under a tree, having journeyed back to South Sudan five years after fleeing their corpse-strewn hometown Malakal.

Encouraged by a six-month lull in fighting as a peace deal holds for the first time since 2015, the family last month joined scores of others warily returning home from Ethiopia and Sudan.

“People died, lots of them. People could literally walk on dead bodies across Malakal. That was why we left,“ Deng told AFP, recounting the family’s flight to Sudan in February 2014.

“I want to know if the country has peace. I want my kids to come back home.”

But for now, they will stay in Udier, an opposition-controlled village relatively untouched by war in the Upper Nile region, keeping an eye on a peace deal which appears to have run worryingly aground, analysts and diplomats warn.

At some point, they are hoping to return to Malakal, once the country’s second city and now a ghost town of flattened, burned homes flanked by a large UN-protected camp where some 30,000 former residents live.

“I am always scared, I have seen people dying,“ Deng said of her fears of fresh fighting.

In Udier, like in much of the country, young men with automatic rifles slung over their shoulders can be seen wandering along dirt paths between villages or strolling through the market. Just in case.

Observers warn that the latest peace deal is in danger, with a long list of tricky issues to be resolved before a unity government is formed in May.

“The two sides stopped fighting. That’s the good news. But now they’re stuck on nearly everything else,“ said Alan Boswell, a South Sudan expert with the International Crisis Group (ICG).

Speaking to AFP in Juba, UN envoy David Shearer said it was promising to see that opposition members were back in town, for the first time in two years.

However “we should be further along... if momentum slows, frustration sets in, and that might lead to anger.”

Observers warn that reuniting arch-rivals President Salva Kiir and rebel leader and former vice president Riek Machar in government for a third time without resolving these issues could be a recipe for further disaster.

It was the pair’s running rivalry which kickstarted a civil war in 2013 characterised by brutal violence, rape and UN warnings about “ethnic cleansing”.

A 2015 peace deal brought Machar back as vice-president, and he returned to Juba with heavy security.

When the deal fell apart in July 2016, the capital was engulfed by a brutal battle between their rival armies. Machar fled on foot with the fighting spreading across the country.

But ahead of Machar’s planned return in May, there have been no steps taken so far to discuss security control in the capital nor moves to establish a unified army.

Speaking to AFP, Cabinet Affairs Minister Martin Elia Lomoro insisted the deal was only one month behind schedule.

“These delays will be corrected ... this agreement will not fail.

“All we hear (from the international community) is ‘oh we are late’... we are not hearing anybody telling us that ‘oh this is the help we have for you.”

The government has asked foreign donors to fund much of its US$285 million (RM1.2 billion) budget to implement the deal.

This includes gathering troops together in a designated zone and eventually creating a new army.

“They haven’t even taken the first steps, steps that don’t cost anything, announcing how many troops they have and where,“ said a foreign diplomat in Juba.

“It is a real dilemma for donors if you fund cantonment and it becomes an incentive for further recruitment.”

Many are also wary about Juba’s record for looting state funds in recent years.

“The peace agreement calls for much more fiscal transparency. It isn’t there. If it was, there would be a lot different reaction from donors,“ said the diplomat.

The other key issue yet to be addressed is the contentious matter of internal boundaries.

When it won independence in 2011, the country was divided into 10 states but it has since been subdivided into 32, in what many critics see as a gerrymandering of traditional boundaries by Kiir to shore up his power.

Boswell said members of a boundaries commission, set up just this month, “face an incredibly difficult if not impossible task”.

The ICG has urged mediators to push Kiir, Machar and other signatories to agree on whether to postpone the unity government in May, and push for a third-party protection force in the capital.

Part of the problem, said the ICG, is that no one has stepped up to enforce the accord, which was mediated by Uganda and Sudan – whose President Omar al-Bashir is now embroiled in his own political crisis.

“Can brokers patch (up) the peace deal enough to keep the parties from sliding back to war?” said Boswell.

“And who will do this? Bashir is the only regional leader who is invested in the peace process, and he’s rather busy at the moment.”

South Sudan’s war has left 400,000 dead, and displaced nearly four million from their homes – the latest bloody chapter in over half a century of near-constant conflict.

While those like Chol Deng have dared to return, others in UN-protected camps (POCs) are waiting for concrete proof of peace.

“When the peace comes, everyone wants to go back home,“ said Rebecca Nyalore John at the POC camp in Juba.

“(When) there shall be no killing, no beating, we can return home and stay in peace. That is all.” — AFP