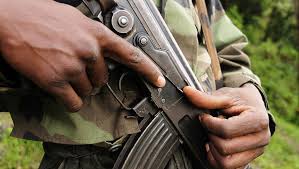 KINSHASA: Seven civilians have been killed in northeast DR Congo and 13 soldiers wounded in violence attributed to a notorious regional militia, sources said.

Thirteen troops were injured in fighting with CODECO on Sunday, according to the UN peacekeeping mission MONUSCO which airlifted the wounded out for treatment.

CODECO - whose official name is Cooperative for the Development of Congo - is an armed political-religious sect drawn from the Lendu ethnic group.

Conflict between the Lendu, who comprise mainly farmers, and the Hema, a herding and trading community, has a long history in the gold- and oil-rich province.

Tens of thousands were killed between 1999 and 2003. The UN says most victims were targeted because they were Hema.

The conflict has reignited in recent years. More than than 700 people have been killed in Ituri since late 2017, a UN report said in January, adding that some of the deaths might constitute a “crime against humanity”.

In the last two months, at least 274 civilians have been killed and more than 200,000 people have fled their homes, the UN’s refugee agency said on May 8.

The Democratic Republic of Congo’s army says it has killed CODECO leaders and seized key bases under a campaign it launched last June. - AFP