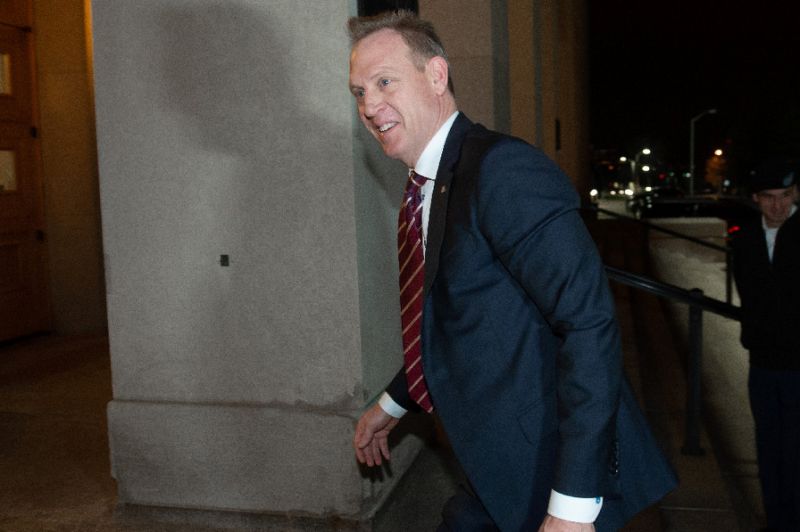 Acting US Defense Secretary Patrick Shanahan arrives at the Pentagon for his first day on the job on Jan 2, 201. — AFP

Washington: Acting US Defence Secretary Patrick Shanahan began his first full day at the helm of the Pentagon on Wednesday with an urgent list of geopolitical to-dos, including the US withdrawal from Syria.

Shanahan, who took the top spot Jan 1 after Jim Mattis resigned amid disagreements with President Donald Trump, must oversee the pace at which the US pulls 2,200 or so troops out of Syria, following the president’s decision last month to exit the war-torn country.

Trump stunned observers by declaring victory over the Islamic State group in Syria and claiming the jihadists had been beaten “badly,“ even though they still number in the thousands.

He has since backpedaled and suggested more of a phased timeline for the withdrawal.

As he started his new job, Shanahan, who previously served as deputy defence secretary, told the Pentagon to focus on the National Defense Strategy, a Mattis-era review that highlights a new era of “Great Power competition” with Russia and China.

“In 2019, the National Defence Strategy remains our guide. America’s military strength remains our focus,“ Shanahan said in a New Year’s message on Twitter.

A defense official added that Shanahan had told colleagues a major concern would be China.

“While we are focused on ongoing operations, Acting Secretary Shanahan told the team to remember: China, China, China,“ the official said.

The US accuses Beijing of an ongoing pattern of military and economic espionage, and has criticized China’s ambitious “Belt and Road” trade and infrastructure initiative as being a form of economic coercion.

According to US officials, Trump is also mulling a 50% draw down in Afghanistan — another momentous move that has left lawmakers and international allies fearing for what comes next.

Little known outside business and Washington circles, Shanahan takes the world stage at a time of tumultuous changes and unpredictable foreign policy moves under Trump.

Shanahan, 56, did not serve in the military but has worked since July 2017 as the deputy defence secretary. Before that, he spent more than 30 years at Boeing.

While Shanahan has not always had day-to-day involvement in thorny geopolitical issues like Syria, Pentagon officials say he is ready to tackle them and previously filled in for Mattis when he was traveling.

Despite a lack of foreign policy or military experience, Shanahan’s executive and technical knowledge made him well suited for the Pentagon’s number two position, which focuses more on the Defence Department’s business side.

But some critics have questioned whether a man with deep industry ties should be running the Pentagon.

At his confirmation hearing to be deputy, the late senator John McCain said a lack of detail in some of Shanahan’s foreign policy answers was “almost insulting,“ and he expressed concerns that putting a former defence executive in the Pentagon could be akin to putting a fox “back in to the henhouse.”

“Under his Ethics Agreement, Mr Shanahan has recused himself for the duration of his service in the Department of Defence from participating in matters in which the Boeing Company is a party,“ spokesman Lieutenant Colonel Joe Buccino said.

3.Greek PM says climate crisis is with us and cost of ignoring it ‘unimaginable’