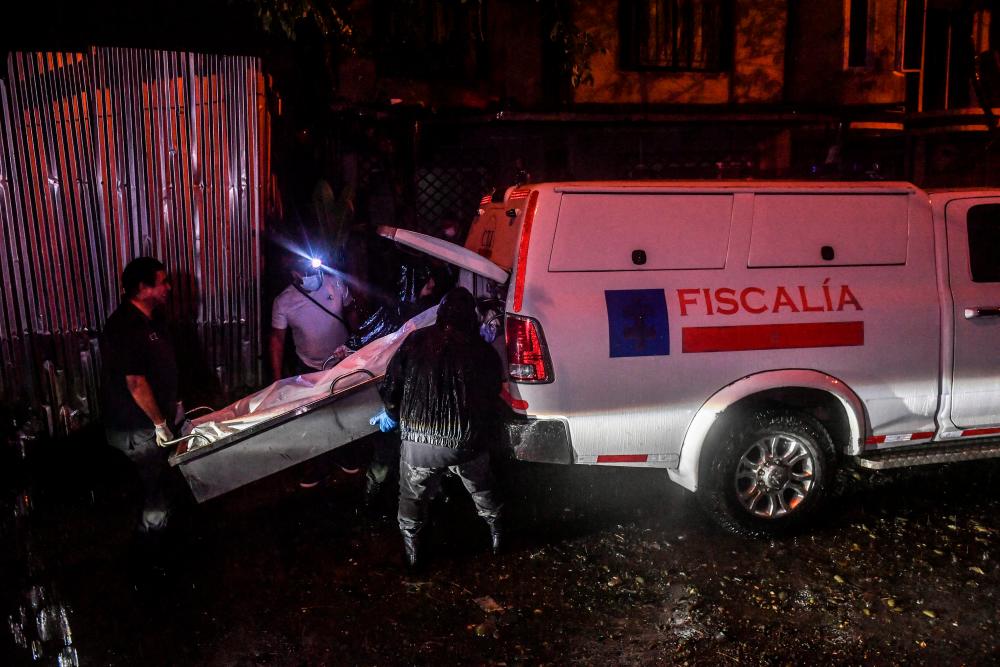 Members of the Technical Investigations Corps (CTI) of the Prosecutor’s Office load the corpse of a man whose death is thought to be related to gang violence into a van, in the port city of Buenaventura, Valle del Cauca Department, Colombia, on September 3, 2022. AFPPIX

BUENAVENTURA: Long marred by poverty and neglect, the port city of Buenaventura on Colombia's Pacific coast must now also contend with the daily terrors of a merciless and escalating war between rival drug gangs.

By mid-afternoon each day, shops lower their shutters, and the streets run empty as inhabitants scurry to safety before nightfall.

Those who can lock themselves behind iron gates. Others take what refuge they can in shacks on stilts or zinc huts perched in stagnant water and filth along the unlit, potholed streets.

“We are witnessing a new urban and territorial war” in Buenaventura, Juan Manuel Torres of Colombia’s Foundation for Peace and Reconciliation told AFP.

“The situation has become very violent and out of control,“ he said, as the “Shottas” and “Spartanos” gangs vie for supremacy in the mainly Afro-Colombian community.

With a population of nearly 400,000, Buenaventura saw 576 killings in the five years from 2017 to 2021 -- one of the highest homicide rates for a city in one of the world's most violent countries.

Last year, the town recorded 50 “forced disappearances” in a vicious campaign of intimidation and extortion headed by the gangs.

When AFP visited, the fear was palpable as police patrolled cautiously, their guns drawn and pointed at the ramshackle buildings lining the plastic-strewn streets.

At night, a hearse arrived under escort to pick up a corpse riddled with bullets and left out in the open.

Children 'with no future'

In Buenaventura's seedy John XXIII district, there are near daily reports of violence.

It was here the gangs, armed with automatic weapons, clashed for several hours on August 30 in what the press dubbed a “night of terror.”

“The authority in the neighborhoods is the Shottas and Spartanos,“ said Buenaventura bishop Ruben Dario Jaramillo.

“They are stronger than the government; the residents have no choice but to submit,“ he told AFP.

According to Torres, what is happening in Buenaventura is indicative of “a total failure of the state.”

This has allowed the gangs, he said, to “coopt the population, enlisting children with no future” in a city where 43 percent of the population is indigent and one in three people unemployed.

Neighborhood activist Wilmar Valencia Orozco said people are too afraid to leave their homes -- even more so their immediate neighborhood.

The most dangerous parts are the “invisible borders” between areas controlled by one gang or the other.

“Young people with no history (with the gangs) are kidnapped and killed just because they live in a certain neighborhood,“ said Orozco.

The Shottas and Spartanos came about in late 2020 after a predecessor cartel called “La Local” split in two.

Both have ties with armed groups who fight for control of illegal mining, drug crops and smuggling routes in the vast Colombian jungle.

“The backbone of their (the gangs’) business is drug trafficking. Then the micro-trafficking, the extortion... and now also the legal trade,“ said Jaramillo, the priest.

According to Torres, the gangs have recently taken over Buenaventura’s food trade: “eggs, cheese, fruit... no staple escapes their grasp,“ he said.

A doctor, who asked not to be named for fear of reprisal, pointed to the many empty shops.

“Many traders had to close. If you don’t pay, they kill you,“ he explained.

“In Buenaventura, the law is that of the gangs!”

A shop owner said he had to increase prices as the gangsters extort ever more protection money.

A taxi driver said, “There are two taxes here, the official one and the street one. And the second one, we really feel it!”

Authorities say the Shottas and Spartanos have between 400 and 600 members each, up to 1,000 counting those in prison.

A main focus of their dispute is the waterways that crisscross the city and give access to Buenaventura Bay for easy movement of drugs, said military official Lieutenant-Colonel Samuel Aguilar.

Soldiers and police deployed in the city face an uphill battle.

“Both gangs have huge logistics and lots of little hands, ‘flies,‘” said Aguilar of the children who do nuisance jobs for the gangsters and create distractions.

“We cannot be everywhere at once,“ the official added.

Colombia’s first leftist president Gustavo Petro has expressed concern about the “serious situation of violence” in Buenaventura, which he blamed on decades of state neglect.

Petro visited the city this month as part of his “total peace” drive, which includes offering gang members an alternative to prison time if they hand themselves over.

Both gangs indicated they were willing to negotiate, the president announced afterward.

“It is a chance for them not to die or end up in prison,“ said Torres of the prospects for surrender.

Added Orozco, the activist: “They are tired of killing each other and hiding. They just want to be able to enjoy their money.” - AFP