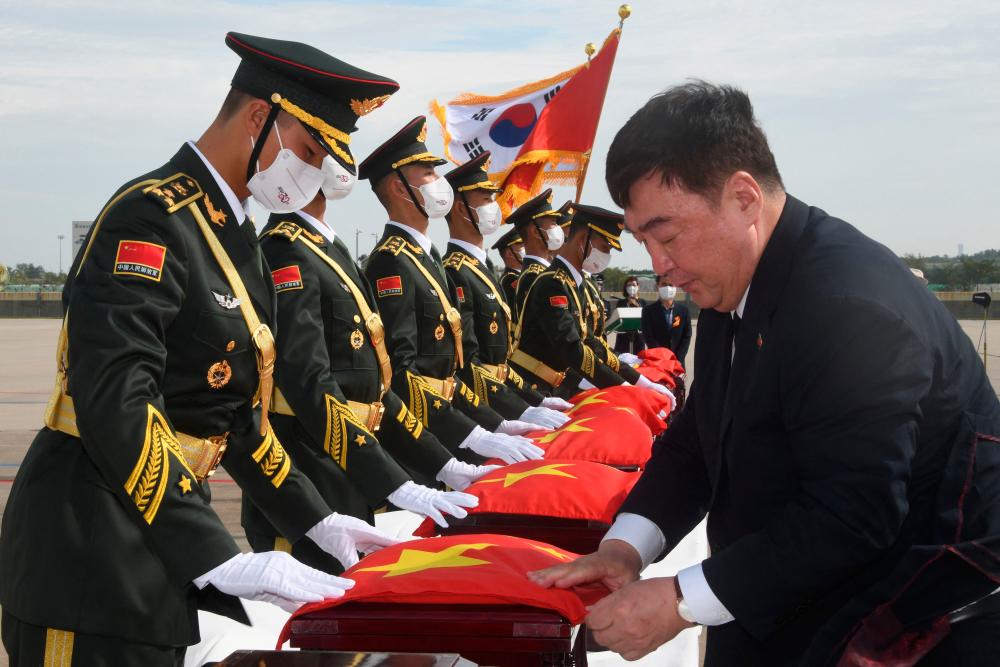 Chinese Ambassador to South Korea Xing Haiming (R) covers caskets containing the remains of Chinese soldiers with a Chinese national flag during the handing over ceremony at the Incheon International Airport in Incheon on September 16, 2022. AFPPIX

SEOUL: South Korea repatriated on Friday the remains of 88 Chinese soldiers killed during the Korean War, the first such ceremony since South Korea's President Yoon Suk-yeol took office in May.

South Korean honour guards handed over wooden caskets with the remains during a ceremony at Incheon airport near Seoul, where they were loaded onto a Chinese air force cargo plane, a live video of the event showed.

The remains were received hours later in China's northeastern city of Shenyang in a military ceremony attended by Chinese veterans of the three-year conflict.

This was the ninth such handover since the two countries -- former Cold War-era foes -- signed a 2014 agreement on the issue, and brings the total sets of returned Chinese remains to 913.

Friday's repatriations are also the first to take place since the inauguration of South Korea's Yoon, who has sought to maintain a friendly relationship with Beijing even as he moves to deepen ties with major security ally Washington.

“Our yearly handovers of the remains of Chinese troops are held on a humanitarian basis, but also symbolise friendly cooperation between South Korea and China,“ Lee Do-hoon, South Korea’s second vice foreign minister, said at the event.

Lee added the two countries would pursue “diverse forms” of cooperation, as they mark 30 years since bilateral diplomatic relations were established.

China intervened on North Korea's side during the 1950-53 Korean War, which is known in China as the War to Resist US Aggression and Aid Korea.

An estimated three million Communist Chinese troops fought alongside Pyongyang's forces, and helped tip the balance of the conflict.

Beijing's intervention saved the North from defeat and pushed US-led United Nations forces back across the 38th parallel, before the war ended in a stalemate that persists to this day.

Casualty figures remain disputed but Western estimates commonly cite a figure of 400,000 Chinese deaths, while Chinese sources give a death toll of about 180,000. - AFP