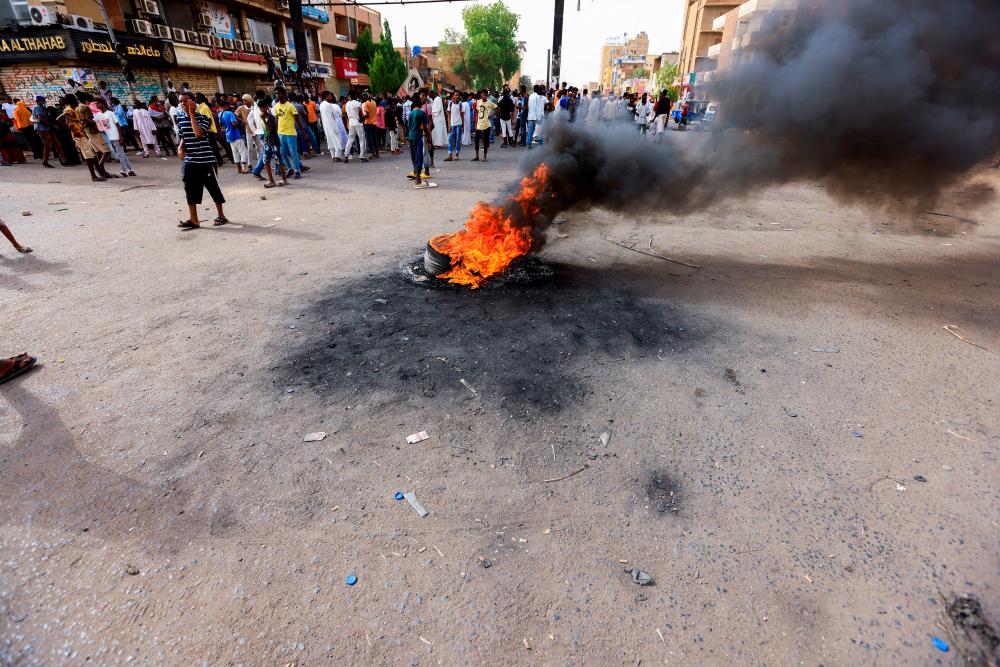 A view of a burning tyre as protesters gather during a rally against military rule, following the last coup and to commemorate the 3rd anniversary of demonstrations in Khartoum North, Sudan July 1, 2022. REUTERSpix

KHARTOUM: Sudanese security forces fired tear gas at protesters on Friday near the presidential palace in Khartoum, a day after nine people were reported killed during the largest anti-military rallies for months.

Protest groups demanding a return to democratic rule have said they will organise an open-ended campaign of sit-ins and other peaceful actions in response to the deaths.

Medics aligned with the protesters said the nine people were mostly killed by gunfire from security forces in Khartoum and the adjoining cities of Omdurman and Bahri. Sudan’s ruling council and government did not immediately respond to requests for comment.

“The sit-in can develop but we must fortify it properly,“ Al-Reda al-Rasheed told Reuters as he stood with other protesters drinking tea and writing out slogans in central Khartoum on Friday.

“Those who have come from Omdurman can join our sit-in and others from surrounding areas as well can join.”

Footage posted on social media showed protests on Friday afternoon in Omdurman, Bahri, and in Madani, southeast of Khartoum, and the sit-in in Khartoum continuing into the evening.

Thursday’s rallies came after more than eight months of demonstrations against military leaders who staged a coup last October, ending a power-sharing arrangement with civilians agreed following the 2019 overthrow of Omar al-Bashir.

Khartoum State police said in a statement they had used tear gas and water cannon and made arrests on Thursday after protesters equipped with stones and metal bars moved against their positions.

Dozens of members of the security forces had been injured, some of them seriously, the statement said. A separate statement from the interior ministry said there would be an investigation into the case of a protester who was shown on unverified social media videos purportedly shot in the street as armed security forces advanced.

Police dealing with protesters rather than guarding sites were not meant to be carrying firearms, it said.

The medics group - the Central Committee of Sudanese Doctors - said on Friday that another protester beaten during demonstrations in the capital a week earlier had died of his injuries, bringing the number of protester deaths since the coup to 113.

U.N. Commissioner for Human Rights Michelle Bachelet said in a statement that at least 335 protesters across Sudan had been arrested, including at least 39 women and “a considerable number of children”.

The military-led government has not released its own estimates of arrests or deaths.

The United Nations, the African Union and the Intergovernmental Authority on Development (IGAD), which are trying to mediate, said they condemned “in the strongest terms possible the use of excessive force by security forces” on Thursday.

“We once again call on authorities to take all necessary measures to stop the violence, stop arbitrary arrests and detentions, and respect the right to freedom of expression and assembly,“ the joint statement read. — Reuters