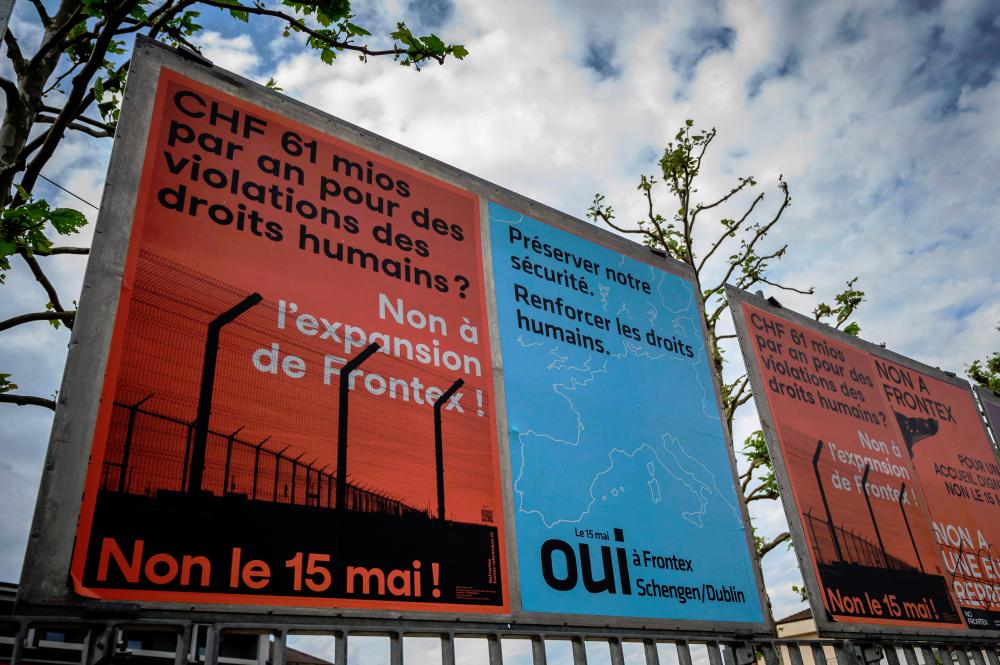 Electoral signs against and in favour of a referendum challenging plans to increase Switzerland’s contribution to the European border agency Frontex are photographed in Geneva. - AFPpix

GENEVA: Switzerland votes Sunday on an initiative to boost the availability of transplant organs by making everyone a potential donor after death unless they have expressly objected.

The legal change, which polls suggest will be accepted, would mark a dramatic shift from the current system.

Today, transplants are only possible if the deceased person consented while alive.

But while surveys indicate that around 80 percent of Swiss favour the idea of organ donation, the wishes of the deceased are often unknown.

In such cases, the decision is left up to relatives -- who in most cases opt against organ donation.

This has left many of those in need of a transplant waiting in vain for an organ.

At the end of 2021, more than 1,400 patients were awaiting transplant organs in Switzerland, a country of around 8.6 million people.

Last year, 166 deceased persons donated their organs in Switzerland, and a total of 484 organs from deceased donors were transplanted.

But 72 people died in 2021 while waiting on an organ transplant waiting list, according to the organisation Swisstransplant.

In a bid to reduce the backlog, the government and parliament want to change the law to a “presumed consent” model, something already adopted in a number of other European countries.

According to that system, people who do not wish to become an organ donor after death must explicitly say so.

Those who have not made their wishes clear would be assumed to be in favour. However, relatives would still be given a say.

In the government-proposed plan, relatives can refuse if they know or suspect that the person concerned would have chosen not to donate an organ.

In cases where no relatives can be contacted, no organs may be removed.

Not everyone agrees that this is the right move.

A group headed by a midwife and a doctor, with support from some theologians and jurists, as well as the populist and religious right, gathered enough signatures to force the issue to a referendum.

They charge that it is ethically dubious to assume someone who has not made their wishes clear would consent to donate an organ.

They insist on the need for patients to provide explicit, informed consent before any and all medical procedures.

The opponents also maintain it would be impossible to inform the entire population of the change, with those in socially precarious positions or with a limited grasp of the national languages at risk of becoming organ donors against their will.

They also warn that the shift would place greater strain on relatives of the deceased, who might not dare refuse, for fear that they would be viewed as selfish.

According to the Swiss Broadcasting Corporation’s latest poll, it appears that most Swiss voters approve of the change, with 61 percent of those questioned in favour. - AFP