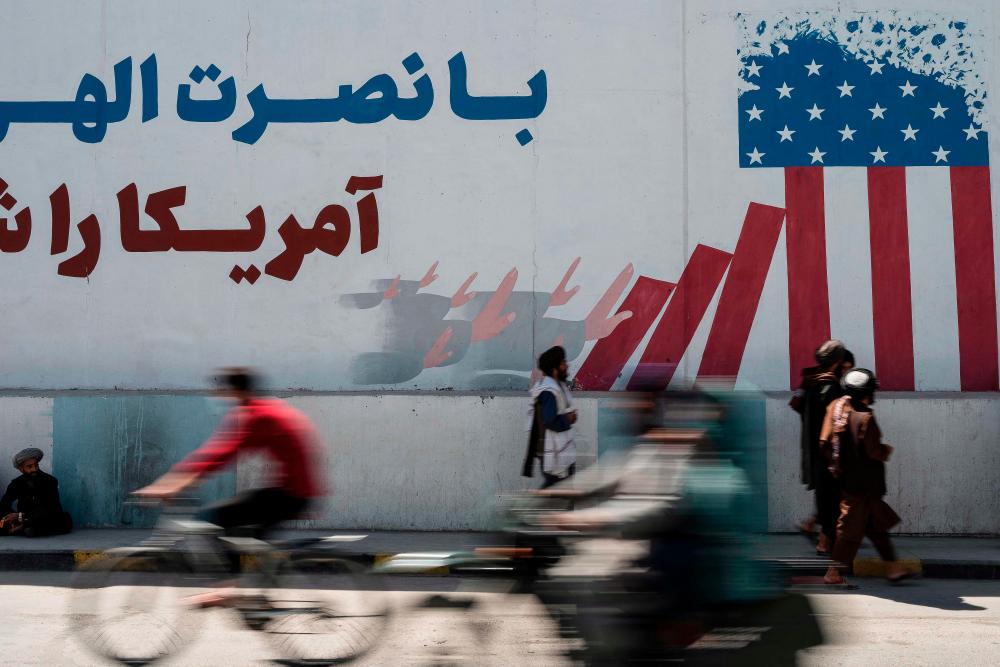 Taliban members walk past a mural depicting a US flag on the first anniversary of the withdrawal of US-led troops from Afghanistan, in Kabul on August 31, 2022. AFPPIX

KUALA LUMPUR: The Taliban-led Afghanistan interim government is still seeking international support in rebuilding the country as it continues to struggle with financial, humanitarian and image crisis.

Global Peace Mission Malaysia (GPM) chairman Datuk Ahmad Azam Ab Rahman said through the organisation’s humanitarian work in Afghanistan, he found that there were signs that the Taliban which took control of the country since Aug last year, is now trying improve the situation.

GPM opened the Malaysian Humanitarian Centre (MHC) in Kabul last February through which it collaborated with local Afghani NGOs to provide and distribute essential aid to the needy in the country.

The activist who had last visited the country in July noted that security in public spaces is improving while there were signs of daily routines returning to normalcy.

“And the Taliban are less visible everywhere, compared to the first six months (when Taliban took over), where there were a lot of Taliban checkpoints everywhere and people were scared due to the uncertainties,” he told Bernama when met at the Institute of Diplomacy and Foreign Relations, here, Thursday.

Taliban took control of Kabul on Aug 15, 2021 after the exit of the US-led forces that occupied the country for more than two decades, and the collapse of the US-backed administration of President Mohammad Ashraf Gani who fled Afghanistan.

The new government has been facing financial difficulties since the US froze some of its US$9.5 billion assets overseas banks last year.

The return of the Taliban rule had also plunged the country into further uncertainties as it struggled to gain international recognition amid battling bad image and bad press at the international stage for its notorious human rights record and its disregard for women’s rights.

“My conclusion is, through our engagements, we are able to see that the Taliban really want to help rebuild their country, they had mentioned this many times.

“They are appealing to the Muslim world to come and invest in Afghanistan. Unless and until the sanctions are lifted, how are they going to manage and get back on their feet,” he said.

Towards that, Ahmad Azam, who is the Commissioner to the Independent Permanent Human Rights Commission (IPHRC) of Organisation of Islamic Cooperation (OIC), was in the opinion that it is important for the new government to be recognised by other countries in order to allow more financial aids and and cooperation to flow into Afghanistan.

“My mission is to engage and assess the situation politically, economically. We must work towards recognition for Afghanistan,” he said.

To date, no country has recognised the Taliban’s government which rebranded the country as Islamic Emirate of Afghanistan.

“They have a lot of high quality products like fruits and nuts. And trading will be the fastest way to help them generate some income,” said Ahmad Azam who is also Malaysian Foreign Minister’s special advisor on Afghanistan. - Bernama