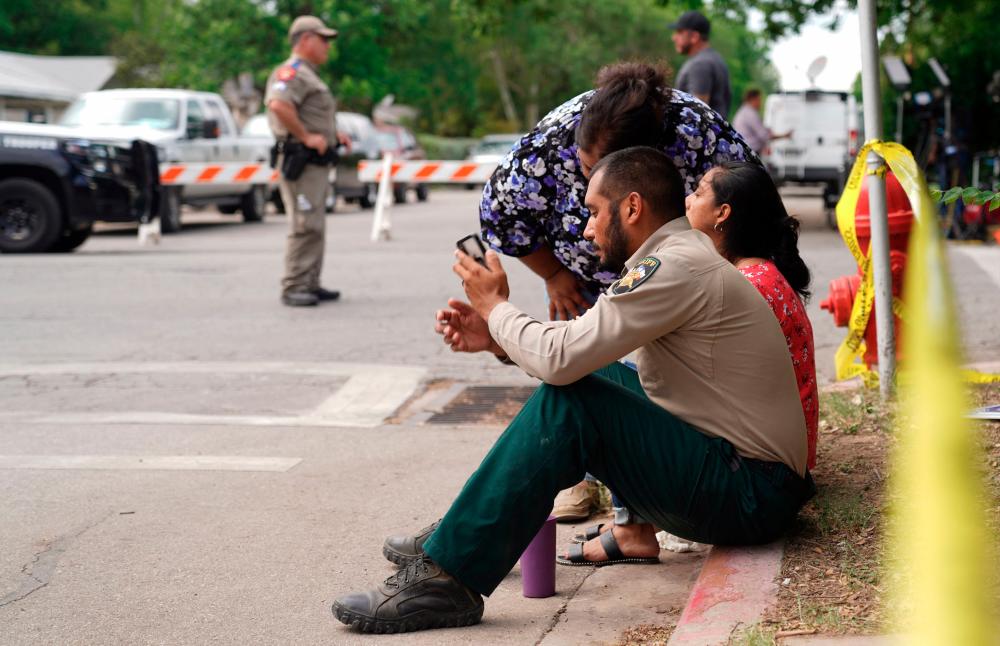 A sheriff checks his phone as he sits on the sidewalk with two women outside Robb Elementary School as state troopers monitor the area in Uvalde, Texas, May 24, 2022. AFPPIX

HOUSTON: An 18-year-old gunman killed 14 children and a teacher at an elementary school in Texas on Tuesday, according to the state’s governor, in the nation’s deadliest school shooting in years.

The attack in Uvalde, Texas — a small community about an hour from the Mexican border — is the latest in a spree of deadly shootings in the US, where widespread horror at gun violence has failed to spur action to head off future killings.

The assailant “shot and killed, horrifically and incomprehensibly, 14 students and killed a teacher”, Governor Greg Abbott told a news conference.

The governor said the suspect, a local teenager, was also “deceased,” adding that “it is believed that responding officers killed him.”

It was the deadliest such incident since 14 high school students and three adult staff were killed in Parkland, Florida in 2018 — and the worst at an elementary school since the 2012 Sandy Hook shooting in Connecticut, in which 20 children and six staff were killed.

President Joe Biden has been briefed on the texas shooting, and was to speak about it later Tuesday, his spokeswoman said.

Local police had previously said a suspect was taken into custody following the shooting, which began at around noon.

Abbott said the shooter was believed to have “abandoned his vehicle and entered into the Robb Elementary School in Uvalde with a handgun, and he may also have had a rifle”.

The school — which teaches more than 500, mostly Hispanic and economically disadvantaged students from second through fourth grade — called on parents not to pick up their children until all were accounted for.

Ted Cruz, a US senator from Texas, tweeted that he and his wife are “lifting up in prayer the children and families in the horrific shooting in Uvalde”.

The deadly violence in Texas follows a series of mass shootings in the United States this month.

Wearing heavy body armour and wielding an AR-15 rifle, the self-declared white supremacist allegedly livestreamed his attack, having reportedly targeted the store because of the large surrounding African American population.

The following day, a man blocked the door of a church in Laguna Woods, California and opened fire on its Taiwanese-American congregation, killing one person and injuring five.

Despite recurring mass-casualty shootings, multiple initiatives to reform gun regulations have failed in the US Congress, leaving states and local councils to enact their own restrictions.