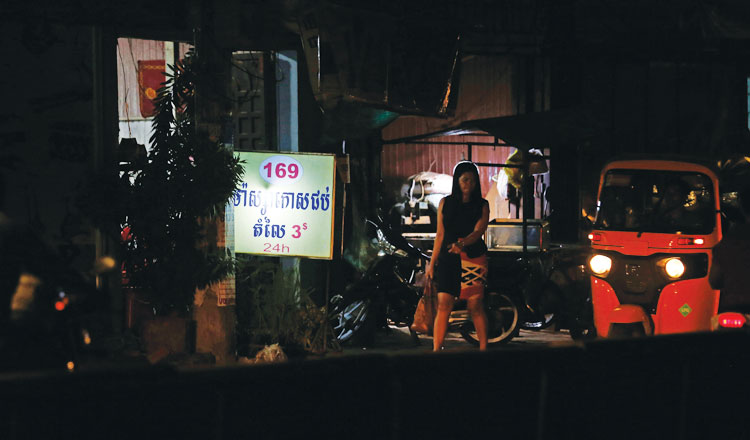 IN Cambodia, prostitution is illegal but prevalent, which means sexual workers conduct their business in secret. They have been working behind the scenes, including under the cover of night clubs, KTVs, cafes and restaurants and even barber shops and beauty salons. But, how about those working day and night in the small massage parlours on the street for a small fee? What does their life look like behind the veil? Taing Rinith, of Khmer Times goes undercover to document the life of the “day butterflies” in Phnom Penh. During this mission, he hears the stories of poverty, struggle and violence – all for the sake of survival and their families.

IT was just after noon when I reached a decrepit, hole-in-wall house on Street 430. In front of it stands a dusty sign announcing “Coining, Cupping and Massage – 10,000 riel”. Four scantily dressed women were sitting on two long sofas in the house, putting on make-up and watching Thai soap opera on their phones. I went in, and said I wanted a massage. One of the women, probably in her 30s or 40s, looked at me and asked me to choose one of them. I chose her.

The woman got up and led me to a small room on the second floor. On the way, I can see the dusty floor and greyed-with-age wall. Once a rat scampered past, and another time I dodged stepping on a cockroach.

If one is to search for massage parlours in Cambodia, the destinations are mostly clean and luxurious shops in the heart of Phnom Penh, such as those near the Independence Monument. Yet, small parlours on the street, like the one I am in right now, are less likely to be on the net, although they are not really an unusual sight. In fact, there are seven-to-eight of such shops on Street 430 alone.

In the room on the second floor, there was no bed but instead a mattress on the floor and on it lies a pillow with a flower motif. Ahya, as the woman wanted to be known, asked me to lie on the bed and started massaging my back but after a short while she paused to answer a phone call from her mother who lives in Prey Veng. Ahya’s mother said her niece, whom she adopted, just had a traffic accident and she needed money for the medical bill. Ahya said she did not have any right now, but added she would earn some from her “client”.

Then she asked me whether I want to do “something else”.

Instead, I came clean, told her I am a journalist who only wished to interview her, and she granted it with no curtains drawn.

Ahya, 33, left Prey Veng for Phnom Penh five years ago to work in a garment factory after divorcing her “lazy and drunkard” husband, leaving her two children and one orphaned niece under the care of her mother. However, she could not support her family on her salary as a factory worker. Then, some friends introduced her to her current job in a street massage parlour.

“Four of us rent the house for our business, and jointly pay the rent of US$500 dollars per month,” she said.

Ahya says at first she only provided massage and coining services to male clients, which fetches only US$300-US$400 per month. Before long, her friends wised her up to earning twice as much and in some good months even more than that by providing “what men want”.

“Of course, as a Khmer woman, I don’t enjoy what I am doing, but I need money to feed my family,” said Ahya who was close to tears. “It is the only way for me to keep my children in school. I have to do this job because I did not have the chance to study when I was young.”

Ahya says most of her clients are workers or tuk tuk drivers, who usually come on their lunch break, but sometimes she receives teenage boys who “want to taste the first sexual experience”. On a good day, she could lap up to five clients, but she says earnings are less than the young, gorgeous women working in the nightlife area.

“I am not young or beautiful like them, and I know I will no longer make money when I got older,” Ahya says. “I am saving money now so that I can open a business later.”

Lida (another moniker), another street masseuse at a nameless shop in Takhmao, says she also provides sexual favours, to mostly truck or taxi drivers who go past her shop, but only when she needs extra money. She keeps her deviations secret from her husband, a construction worker.

“People can criticise us, calling what we are doing a deviation in society, something that a Khmer woman should not do,” Lida says. “Go on, they can call us what they want. But, those people do not feed me and my family.”

“Once, the wife of a client caught him coming to me. She hit me on the face and called me a ‘slut’. Back home, my husband asked what happened to me, and I told him I had a traffic accident.”

Of course, not all street masseuses provide sexual acts. There are those who only give coining, cupping and perhaps some basic massage. One of them, Kouch Theary, 29, says she has never crossed the line, not once.

However, some of her clients have treated her as a “prostitute”.

“Some clients ask me to sleep with them, but I always says ‘no’,” Theary confides. “Some even molested me. But, I always tell them I only help relieve their body aches, and nothing more.”

A risky or even dangerous job

Both Ahya and Lida said there have been many occasions where uncouth clients did not pay their bills. Although it is a monetary loss, they cannot seek help from police because their way of making a living is not right in the eyes of the country’s laws.

“If we go to the police, we could be arrested,” Ahya says. “We don’t have money to give them in exchange for our release.”

“Once I was even blackmailed by a man who claimed he was a police officer,” Lida says. “He forced me to have sex with him for free, or he would come back with the force to close down my shop. I was not sure he was really an officer, what choice did I have?”

Police raids on the occasional massage parlours are not unusual in Cambodia, especially in urban hubs such as Phnom Penh, Siem Reap and Sihanoukville. In fact, reports in the local media are quite frequent. When a shop gets raided, everyone would be arrested, and condoms are usually seized as “evidence”. Anyway, such businesses still exist everywhere.

Apart from non-paying clients and police raids, the street masseur, no matter that they are involved in sexual acts or not, have to face sexual abuse and violence every day.

In February last year, Sanchez Shawn Daniel, an American tourist, was arrested for killing a 27-year-old masseuse in Kampot after she refused to have sex with him. Two months later, another masseuse who work from her rented house in Chak Angre Leu was killed by her jealous boyfriend.

“All these ladies were working behind closed doors, and no one can know what happens behind these doors,” says Ros Sopheap, the Executive Director of Gender and Development of Cambodia (GDC).

All the risks, Sopheap explains, is a result of the criminalisation of prostitution, although it has been called “the oldest profession in the world” and the Kingdom has not been spared, for centuries.

“The concept of providing sexual services has been seen as something against the social norms and values of Khmer women,” she adds. “But, it is the matter of demand and supply, which is has not been accepted by the public and the government.”

A UNaids estimate in 2016 disclosed that there are around 34,000 prostitutes in Cambodia, many of whom are Vietnamese.

The Law on Suppression of Human Trafficking and Sexual Exploitation, which was enacted in 2008, punishes the managing of prostitutes and the maintaining of a brothel, as well as a mere act of exchanging sex for money.

Meanwhile, the Women’s Network for Unity, established in 2000, has been lobbying for the amendment of the 2008 law for legal and human rights and better working conditions for sex workers.

“The Law (on Suppression of Human Trafficking and Sexual Exploitation) does not only affect the sexual workers’ businesses but also their well-being, mainly by taking away their chance to learn how to defend themselves against STDs and bad clients,” Sophea added.

In the meantime, one of the street masseuses I spoke to revealed she got Hepatitis B from one of his client.

“Wherever they work, in a massage parlour, at a KTV or in an open brothel, these workers need better rights for a better life,” Sopheap says.

“To achieve this, everyone has to change their attitude about treating them as deviants and work together to assist them.” — KhmerTimes

1.Unemployed man who decapitated mum was under influence of drugs

2.EMCO at Kampung Batu Talam in Raub from Jan 19

5.One more week needed to put out fire at Pulau Burung landfill