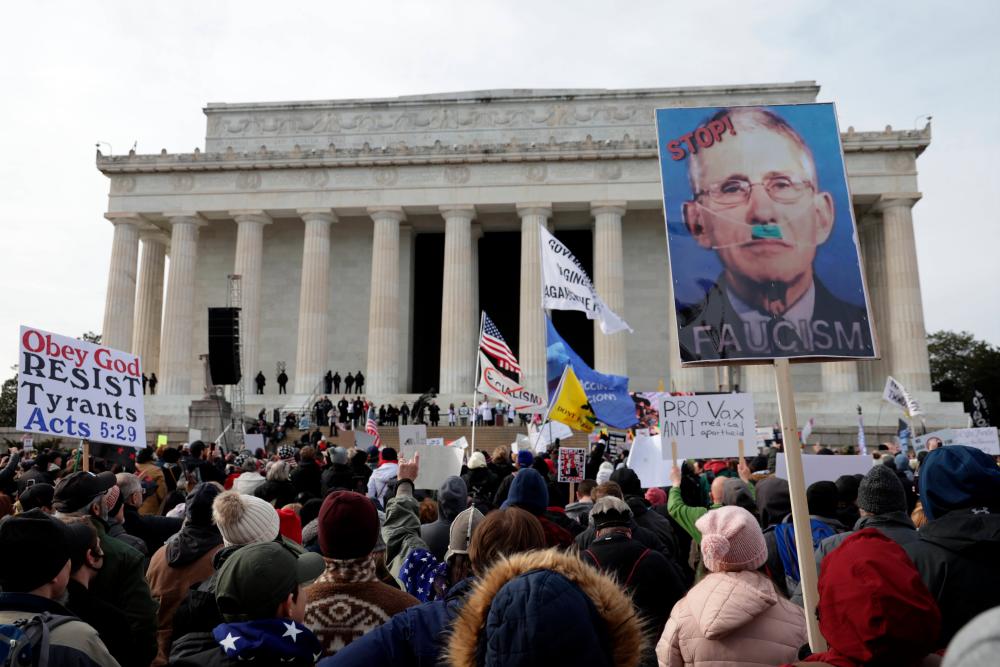 WASHINGTON, DC - JANUARY 23: Anti-vaccination activists participate in a rally after a Defeat The Mandates DC march at the Lincoln Memorial January 23, 2022 in Washington, DC. AFPPIX

WASHINGTON: Waving signs denouncing President Joe Biden and calling for “freedom,“ several thousand people demonstrated in Washington Sunday against what some described as the “tyranny” of Covid-19 vaccine mandates in the United States.

Speaker after speaker -- including notorious anti-vaxxer Robert F. Kennedy Jr., who compared vaccine mandates to the Holocaust -- took to the microphone in front of the white marble Lincoln Memorial to decry the rules.

Like other Covid restrictions aimed at reining in a disease that has infected more than 70 million people in the United States, killed more than 865,000 and brought much of daily life around the globe to a stuttering halt for two years and counting, vaccine mandates have become a deeply polarizing political issue.

“Mandates and freedoms don’t mix, like oil and water,“ another speaker said.

“Breathe. Inhale God, exhale fear,“ exhorted yet another to applause from the crowd, made up of people of all ages, including children, and largely unmasked.

“I’m not anti-vaccine, but I’m anti this vaccine,“ Michelle, a 61-year-old physical therapist from Virginia who declined to give her last name, told AFP.

She said the messenger RNA serums developed by companies such as Pfizer and Moderna in record time were “too experimental” and “rushed.”

The mRNA vaccines, given to millions of people around the world in the past year, have been proven safe and effective, as well as being hailed as potential gamechangers in modern medicine.

Michelle, who paused in the interview to sing the national anthem with other demonstrators, said she has a religious exemption from taking the vaccine -- but that to continue coming to work in Washington she has to get tested every week.

To her regret, her son, who initially had also resisted taking the vaccine, has now relented.

“He went and got it without me knowing -- so much peer pressure,“ she said.

'My body, my choice'

Another demonstrator, Therese is adamantly opposed to vaccines -- all vaccines.

She explained that she came by bus from Michigan, in the north of the country, to protest.

“Mandates are not appropriate... vaccines aren’t working, we’ve been lied to about the vaccines,“ said the 61-year-old, who worked in a school cafeteria before her retirement and also refused to give her last name.

“And we should not be masking our children,“ she added.

“I talked to a couple of psychologists who say our children are suffering and they’re depressed... It’s terrible. We need our freedom back.”

Further up the steps, the speakers -- including some people in white coats, presented as doctors from Texas -- continue to come and go.

“We are Americans and that’s what we do, we fight tyranny!” claims another.

A few joggers, as if lost, walk through the crowd amid the signs proclaiming slogans such as “My body, my choice” or “God is our rock that will take down Goliath.”

There are also many anti-Biden posters and a few flags bearing the name of his predecessor Donald Trump -- under whom the vaccines were developed and who has taken credit for them.

Isaac Six, 34, shrugged off the difficulty of being unvaccinated while in Washington, where proof of vaccination is now required to go to restaurants and other public places.

Vaccines in general “are wonderful, they have helped millions of people,“ he added.

But mandating these vaccines, which like all vaccines are not 100 percent effective at preventing transmission, is “completely irrational,“ he argued.

What worries him are policies adopted “out of fear and panic” and “by one person.”

“I would like to see more of the legislative process involved, the people that we elected to represent us be the ones to actually pass legislation,“ he said. - AFP