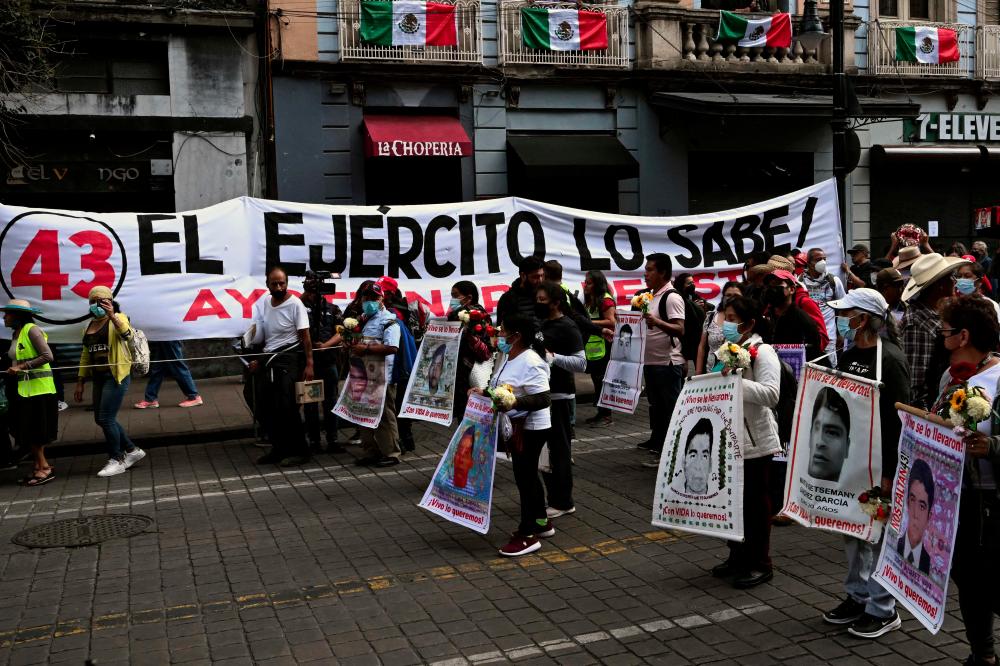 People take part in a march in Mexico City on September 26, 2022, to mark the eighth anniversary of the disappearance of 43 students of the teaching training school in Ayotzinapa. - AFPPIX

MEXICO CITY: Thousands of Mexicans marched on Monday demanding justice on the eighth anniversary of the disappearance of 43 students, after investigators branded the atrocity a “state crime” involving the military and other institutions.

President Andres Manuel Lopez Obrador urged protesters to rally peacefully in memory of the victims of a tragedy that shocked the nation and prompted international indignation.

Relatives, students and other demonstrators advanced through the heart of Mexico City chanting slogans such as “alive they took them, alive we want them!”

Some carried signs reading: “It was the army.”

“We demand that the military be investigated, that they be punished,“ said Blanca Nava, the mother of one of the students.

Lopez Obrador’s appeal came after several dozen members of the security forces were injured on Friday in clashes with protesters hurling rocks and homemade explosive devices at a Mexican military base.

“The only thing is to avoid violence,“ Lopez Obrador told reporters, declaring Monday a day of national mourning.

“It’s not about throwing stones or Molotov cocktails. It’s about protesting peacefully,“ he said.

Monday’s march appeared to be mostly peaceful, with only occasional skirmishes between protesters and the police.

The 43 teaching students had commandeered buses in the southern state of Guerrero to travel to a demonstration in Mexico City before they went missing.

Investigators say they were detained by corrupt police and handed over to a drug cartel that mistook them for members of a rival gang, but exactly what happened to them is disputed.

It said that military personnel bore “clear responsibility,“ either directly or through negligence.

Arrest warrants have been issued for more than 80 suspects, including military personnel, police officers and cartel members.

But a lawyer for the victims’ families, Vidulfo Rosales, told reporters that prosecutors had withdrawn at least 20 of the warrants.

“That’s why there were strenuous demands for answers,“ he said, referring to Friday’s protest violence, which came despite a number of high-profile detentions in the case.

Former attorney general Jesus Murillo Karam, who led a controversial investigation into the mass disappearance, was arrested last month on charges of forced disappearance, torture and obstruction of justice.

This month an army general and two other military personnel were also detained.

According to an official report presented in 2015 by the government of then-president Enrique Pena Nieto, cartel members killed the students and incinerated their remains at a garbage dump.

Those conclusions were rejected by relatives, independent experts and the office of the United Nations High Commissioner for Human Rights.

So far, the remains of only three victims have been identified. - AFP