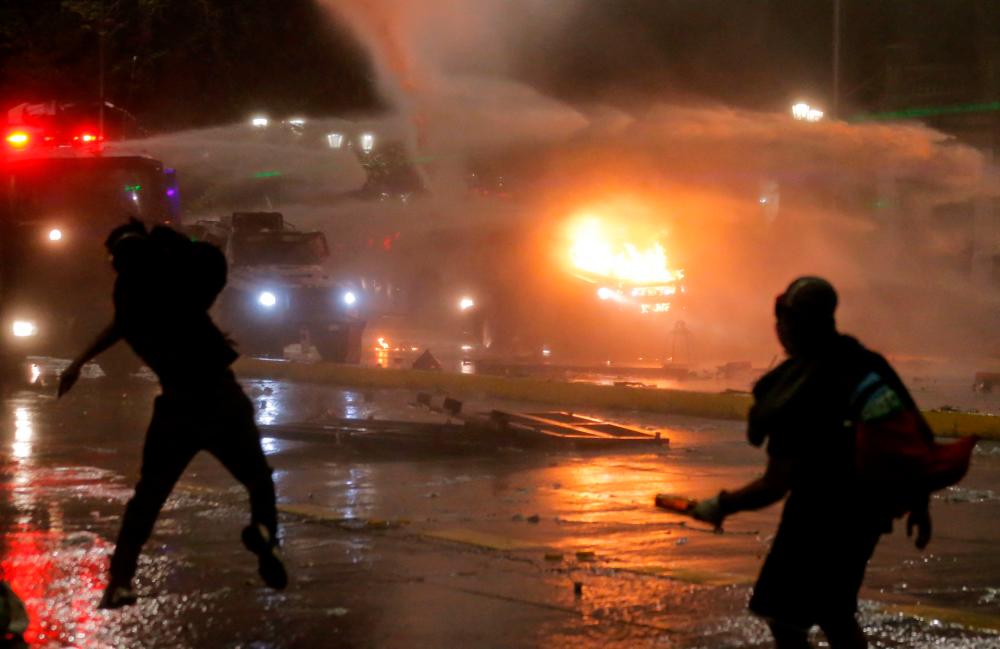 Demonstrators clash with the police during a protest to mark the second anniversary of months of civil unrising against social inequality, in Santiago, on October 18, 2021. AFPpix

SANTIAGO: Thousands of protesters took to the streets of Chile on Monday to mark the second anniversary of the demonstrations against inequality that sparked the re-writing of the constitution.

More than 30 people died in the unrest that followed the October 2019 demonstrations while right-wing President Sebastian Pinera’s government came under fire over an at times brutal response from security forces, including some rights violations.

Thousands of demonstrators congregated in the capital Santiago and other cities to mark the occasion and renew their calls for greater social justice.

“Not much has changed but the people are more awake, more ready to raise their voice,“ Valentina Sagrado, a 22-year-old student of psychopedagogy, told AFP.

Just as in 2019, the majority of protesters were young and chanted anti-government slogans as they marched past the presidential palace towards Plaza Italia, the epicenter of the movement two years ago.

Authorities removed traffic lights and rubbish bins from the square to prevent them being vandalized.

The original protest in 2019 was initially sparked by a hike in metro fares.

The unrest that followed left 34 dead and 460 people with eye injuries, including some that lost their sight, from pellets and tear gas fired by police.

“Things are pending, we need to move forward with a new constitution, that’s why people are protesting,“ hairdresser Pablo, 22, who did not give his surname, told AFP.

At least 5,000 police officers have been deployed throughout the country to keep order, local press reported.

One of the main targets of protests in 2019 was the constitution implemented during the Augusto Pinochet dictatorship (1973-90).

On Monday, the constituent assembly elected to re-write the constitution began its work following a period of 100 days in which it set out its internal rules.

The 155-member assembly is headed by an indigenous woman and dominated by independents not aligned to Chile’s main political parties.

The hope for millions of leftists and the working classes is an end to the neo-liberal model that has been supported by the right, conservatives and the business sector.

Chile’s neo-liberal policies were credited with turning the country into one of the richest and most stable in the region, but at the same time the gap between rich and poor widened.

“This is a symbolic day, a day that Chile and the citizenry won together,“ said Elisa Loncon, the assembly head.

“We need to enact deep changes to achieve a new constitution in a democratic manner.”

But for the likes of Sebastian Sichel, the presidential candidate from Pinera’s ruling party, there is nothing to celebrate.

“October 18, 2019 is a day that should be painful for all of us, not a commemoration or celebration. It’s the failure of the political class and violent people took over the agenda because the political class was unable to resolve the urgent problems,“ said Sichel.

Chile heads to the polls on November 21 for a general election with a possible second round run-off four weeks later to decide the new president, who will assume office in March. — AFP