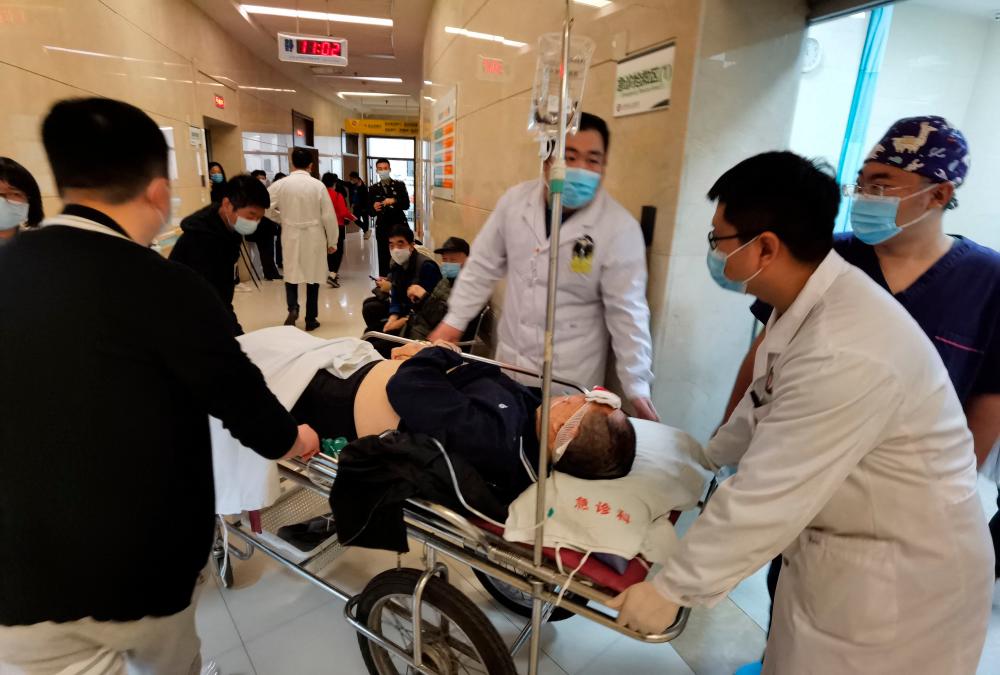 Medical workers wheel a patient at a hospital in Shenyang, China’s northeastern Liaoning province on October 21, 2021, after a gas explosion at a restaurant ripped through a busy street killing at least three and injuring dozens. AFPpix

BEIJING: A gas explosion at a restaurant ripped through a busy street in a major Chinese city on Thursday, killing at least three people and injuring dozens, state media reported.

Dramatic footage from a nearby car's dashboard camera, published by state media, showed a large cloud of smoke and dust erupting over the street, with people running to safety,

State broadcaster CCTV showed windows ripped out of several buildings in a street coated with dust and debris in Shenyang, capital of Liaoning province in northern China.

Rescuers found three people dead and more than 30 injured, and the cause of the explosion is under investigation, the People's Daily reported.

Ambulances and fire engines lined the street after the blast as workers towed away destroyed cars and a smashed-in bus, the CCTV footage showed.

The blast occurred Thursday morning on the residential street, which is lined with businesses, official news agency Xinhua said.

Investigators have "preliminarily determined that the explosion occurred within a commercial and residential building," Liaoning's emergency response authority said in a social media post.

Stunned passersby were seen shaking shards of glass and debris off their clothes.

Gas explosions are common in China due to weak safety standards and poor enforcement.

A blast in June killed 25 people and injured more than a hundred others when a gas line exploded in a residential compound in central China's Hubei province.

Eight people, including the general manager of the company that owned the gas pipe, were later detained after authorities found "unsound" safety practices and serious defects in the pipe.- AFP