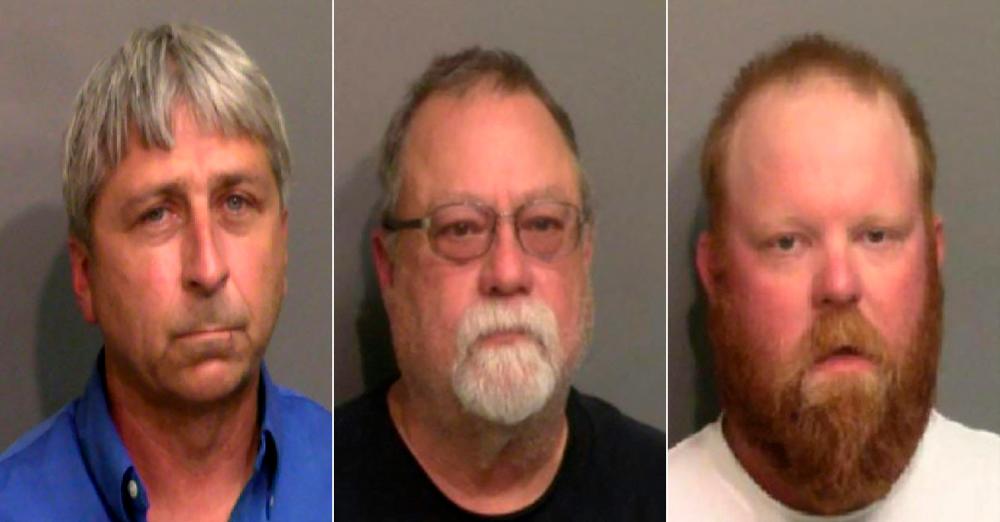 This file combination of handout photos created on June 24, 2020 using booking photos released by the Glynn County Sheriff's Office in Georgia shows (from L) William Roderick Bryan, Gregory McMichael and his son, Travis McMichael. Three white men in the US state of Georgia will go on trial Monday in the high-profile shooting death of a Black jogger that sparked a national outcry and helped fuel last summer's social justice protests.Gregory McMichael, 65, his son Travis, 35, and their neighbor William Bryan, 52, have been charged with murder and aggravated assault after chasing 25-year-old Ahmaud Arbery and shooting him during a confrontation in February 2020. - AFPPix / Glynn County Sheriff’s Office

WASHINGTON: Three white men in the US state of Georgia will go on trial Monday in the high-profile shooting death of a Black jogger that sparked a national outcry and helped fuel last summer’s social justice protests.

Gregory McMichael, 65, his son Travis, 35, and their neighbour William Bryan, 52, have been charged with murder and aggravated assault after chasing 25-year-old Ahmaud Arbery and shooting him during a confrontation in February 2020.

The father and son followed Arbery in a pickup truck, while Bryan trailed them in his own vehicle and filmed the scene. After an altercation, Travis McMichael opened fire and killed Arbery.

The three men contend that they mistook the jogger for a burglar active in the area and invoked a Georgia law allowing ordinary citizens to make arrests.

Local prosecutors, for whom Gregory McMichael, a retired police officer, had worked for a long time, did not make any arrests in the case for nearly three months.

It was only after the video of the shooting was leaked online and shared widely on social media that the case was transferred to state police and the three suspects were arrested and charged.

The death of George Floyd two weeks later under the knee of a white police officer in Minneapolis reignited a national debate on racial justice and police violence against Black Americans, and Arbery became one of the symbols of the Black Lives Matter national protests that ensued.

“A Black man should be able to jog without fearing for his life,” President Joe Biden tweeted on the anniversary of Arbery’s death.

Jury selection is expected to last several days, given the intense media scrutiny of the case.

The defendants are then expected to plead self-defense, arguing that Arbery was resisting lawful arrest.

Prosecutors will insist that the victim was unarmed and that nothing links him to a series of burglaries that took place in the neighbourhood where he was jogging.

Ben Crump, a civil rights attorney who has represented a number of African American families in high-profile police violence cases, said he hopes the court “will see through this tactic and deliver Ahmaud and his family justice.”

“If these killers get off without consequence, that sends the message that lynching Black men in 2021 carries no penalty.”

Since Arbery’s death, Georgia has passed a law that imposes additional penalties for crimes motivated by hatred toward a victim’s race, gender, sexual orientation and other characteristics.

Arbery’s mother has filed a separate civil lawsuit demanding US$1 million (RM4.16 million) in compensation from the McMichaels and Bryan, but also from local authorities accused of trying to cover up the case.

One of the local prosecutors, Jackie Johnson, was indicted last month for violating her oath of office and allegedly hindering the investigation into Arbery’s death.