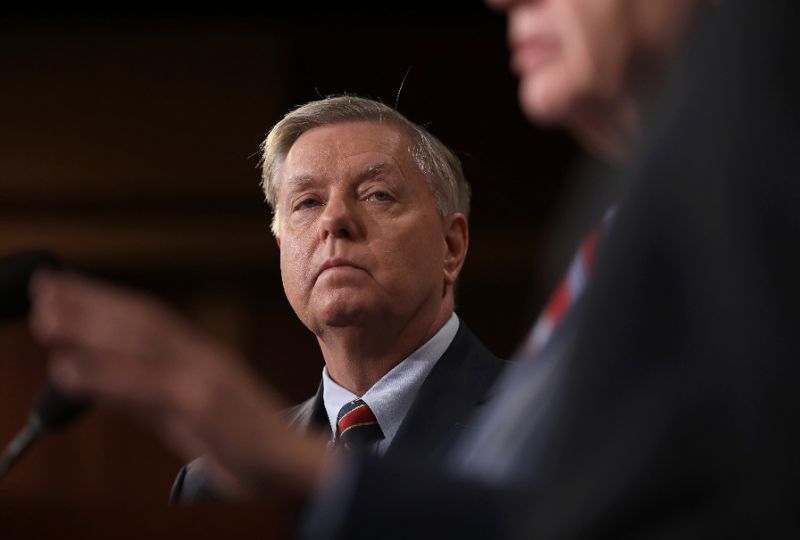 Washington: A senior Republican senator said Sunday that he would be meeting with US President Donald Trump to urge him to reconsider his plan to withdraw all US troops from Syria and many from Afghanistan.

“If we leave (Syria) now, the Kurds will get slaughtered,“ Lindsey Graham said on ABC’s “This Week,“ referring to the Kurdish troops allied with US forces in Syria.

“I’m going to ask the president to do something that President Obama would never do: reconsider.” He did not say when the two would be meeting.

Graham, who sits on the Armed Services committee and has frequently visited US troops in conflict regions, said Trump was “frustrated” by the limited options available in Syria.

“I’m going to talk to him,“ Graham said. “The president is reconsidering how we would do this. He’s frustrated.

“I get it. We’re not the policemen of the world here. We’re fighting a war against ISIS,“ he said, using an alternative name for the Islamic State group. “They’re not defeated in Syria. I’m asking the president to make sure we have troops there to protect us.”

Graham added: “I’m going to ask him to sit down with his generals and reconsider how to do this. Slow it down. Make sure we get it right and ISIS never comes back. Don’t turn Syria over to the Iranians.”

Kellyanne Conway, a close Trump advisor, seemed to hint on Sunday that the president might be tweaking his withdrawal plans.

“In Iraq he had a closed-door meeting and he said watch what happen s... Watch what happens because he’s got plans and I won’t get ahead of his announcement, but he did want me to convey that,“ she said on “Fox News Sunday.”

“This president is cleaning up the mess left by the last administration, which never took the threat of ISIS seriously.”

Trump’s abrupt decision on Syria stunned regional players, US politicians of both parties and military leaders, who expressed surprise that such a major decision would be announced after apparently so little advance consultation, against the advice of his national security advisors — and on Twitter.

US Defence Secretary Jim Mattis resigned following the announcement, which came on the same day that US officials said Trump was also planning a significant drawdown in Afghanistan, with some reports suggesting as many as half of the 14,000 troops could leave.

Graham warned at the time that a reduction now of US forces in war-torn Afghanistan risked “paving the way toward a second 9/11.”

A prominent critic of the move was retired US army general Stanley McChrystal, the former commander of US and international forces in Afghanistan.

On Sunday, he told ABC the dual drawdowns could seriously weaken US influence in the region.

“We have a tumultuous regime or region (in Syria) that now has a Russian presence which had been out for about 30 years... and now Russia is back. They’re back in an influential way,“ he said.

“Iran has increased influence across the region now. If you pull American influence out, you’re likely to have greater instability, and of course it will be much more difficult for the United States to try to push events in any direction.”

“Just when we were starting to sit down with the Taliban, just as we were starting to begin negotiations, he basically traded away the biggest leverage point we have ... Their incentives to try to cut a deal dropped dramatically,“ McChrystal added. — AFP