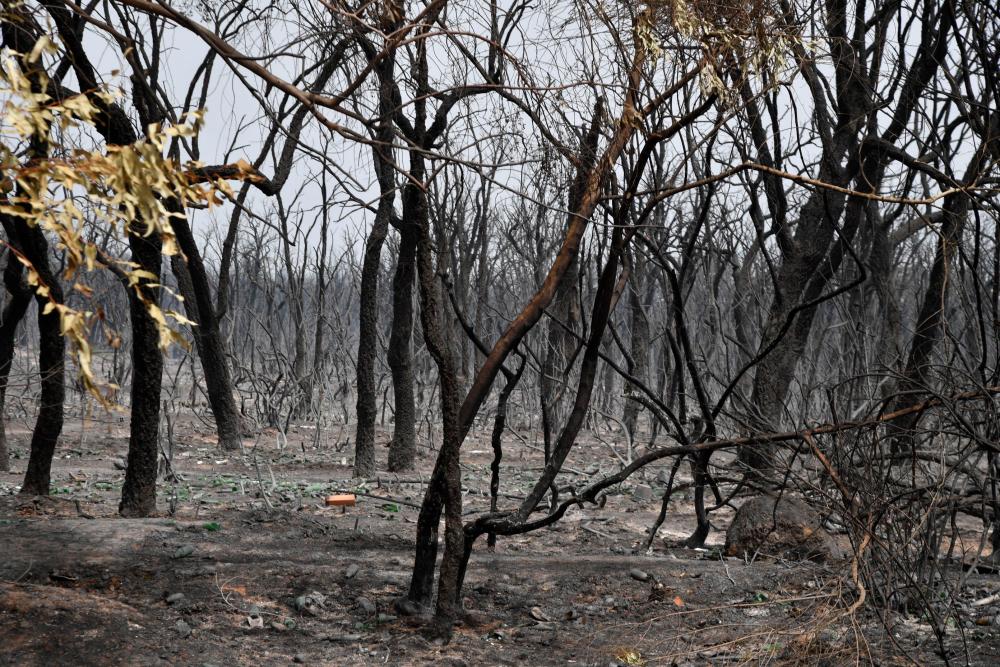 A picture shows a burnt forest following raging fires near Algeria's city of el-Kala on August 17, 2022. Algerian firefighters were today battling a string of blazes, fanned by drought and a blistering heatwave, that have killed at least 38 people and left destruction in their wake. AFPPIX

ALGIERS: Algerian firefighters were today battling a string of blazes, fanned by drought and a blistering heatwave, that have killed at least 38 people and left destruction in their wake.

Deadly forest fires have become an annual scourge in the North African country, where climate change is turning large areas into a tinderbox.

According to multiple sources including local journalists and the fire service, at least 38 people have been killed, mostly in the El Tarf region near Algeria’s eastern border with Tunisia which was baking in 48°C heat.

At least 200 more people have suffered burns or respiratory problems from the smoke, according to various Algerian media.

A journalist in El Tarf described “scenes of devastation” on the road to El Kala in the country’s far north-east.

“A tornado of fire swept everything away in seconds,” he told AFP by telephone.

“Most of those who died were surrounded while visiting a wildlife park.”

Emergency services were still battling a blaze around Tonga lake, he said.

Local media reported that eight people had been burned to death in a bus near the city of 100,000 residents.

Firefighters were also battling a large blaze in the mountainous area of Souk Ahras, a journalist in the area told AFP.

He described scenes of panic in the city of half a million, where nearly 100 women and 17 newborn babies had to be evacuated from a hospital near the forest.

Some 39 blazes were ravaging various parts of northern Algeria, according to the fire service, and there were fears that hot winds could spark new ones that authorities are ill-equipped to fight.

The scenes sparked fears of a repeat of fires last year which killed at least 90 people and ravaged 100,000 hectares of forest and farmland in the country’s north.

Authorities have rented a Russian Beriev BE 200 water bomber plane, but it has suffered a breakdown and is not expected to be operational again until Saturday, according to interior minister Kamel Beldjoud.

The civil protection service and the army do have access to several firefighting helicopters.

Experts have called for a major effort to bolster the firefighting capacity of Africa’s biggest country, which has over 4 million hectares of forest.

One specialist, who asked not to be named, told AFP that in the 1980s the country had 22 Grumman aircraft for battling forest fires but that they had been “sold on the cheap, without any alternative solution being proposed”.

Algeria had agreed to buy seven firefighting aircraft from Spanish firm Plysa, but cancelled the contract following a diplomatic row in late June, according to specialist website Mena Defense.

Since early August, 106 fires have broken out in Algeria, destroying 800 hectares of forest and 1,800 hectares of woodlands, according to Beldjoud, who said some had been caused by arson. - AFP 5.Isa Samad’s appeal against corruption conviction for hearing on March 7 next year